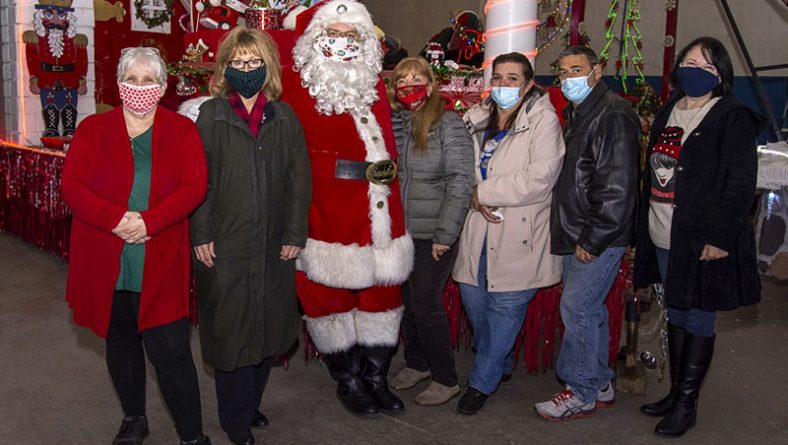 (Windsor Parade Corp. volunteers at their warehouse in Tecumseh, ON, where their Santa Claus Parade floats are stored during a get together on Sat. Nov. 14, 2020. From left, Bonnie Kozma, Patricia Crichton, Nicholas Claus, Maggie Durocher, Pamela Jones, Dennis Jones and Christina Bedal. Photo above by Eric Bonnici / Eyes On Windsor.)

In a pandemic filled year of restrictions and event cancellations, organizing a parade seemed impossible, but the Windsor Parade Corporation has managed a holiday miracle and will bring reverse drive through Santa Claus parades to Kingsville, Amherstburg and Windsor this year.

Last Saturday (Nov. 14) volunteers of the Windsor Parade Corp. gathered at a warehouse in Tecumseh where their Santa Claus Parade floats are stored. Despite knowing whether or not pandemic related restrictions would make the parade possible or not, they still spent months renovating their floats. Maggie Durocher, Director, Windsor Parade Corporation, says everyone is working so hard “because the kids still deserve Santa. It’s just not acceptable to me that we can’t find a way.”

Volunteers held onto hope, and continued to decorate the parade floats while they were in storage. Durocher said, “look at all the work the volunteers have done in here, the bottom line is… THEY BELIEVE! This isn’t just piddily stuff, they work hard, they’re here because they believe and want the parade to happen and be so special.” 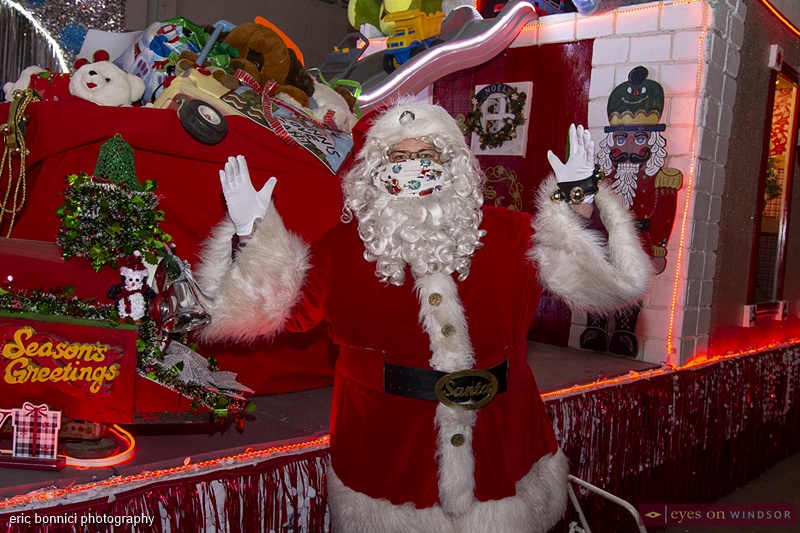 Santa Claus standing in front of the Windsor Parade Corp. Santa Workshop float at their warehouse in Tecumseh, ON, on Sat. Nov. 14, 2020. Photo by Eric Bonnici / Eyes On Windsor. 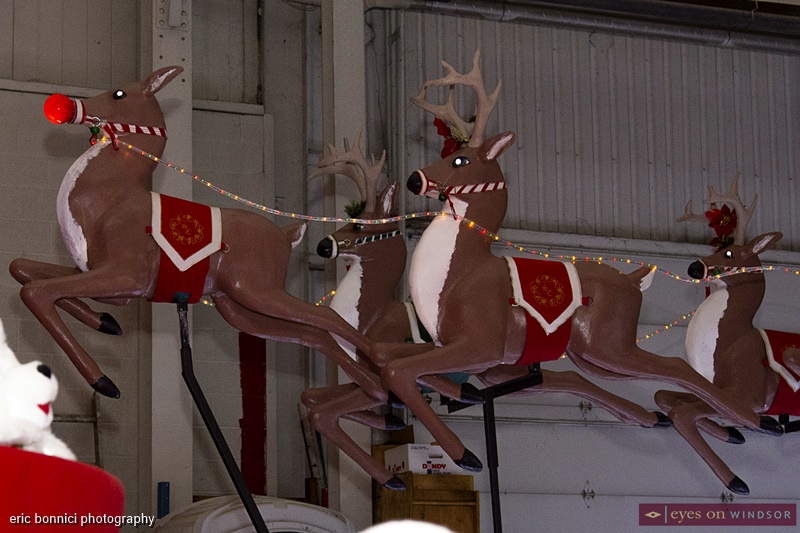 Windsor Parade Corp. Santa’s Sleigh float at their warehouse in Tecumseh, ON, on Sat. Nov. 14, 2020. Photo by Eric Bonnici / Eyes On Windsor.

Volunteer Bonnie Kozma said, “the floats all have new stuff on them this year.” She explained that the Santa Sleigh Float, which was built just last year, had new reigns added to the reindeer. She pointed out that the base of the float, which is decorated to look like a cobblestone wall, has specially shaped rocks incorporated. Looking closely, a candy cane, fish, and Windsor Essex County shapes can be spotted. 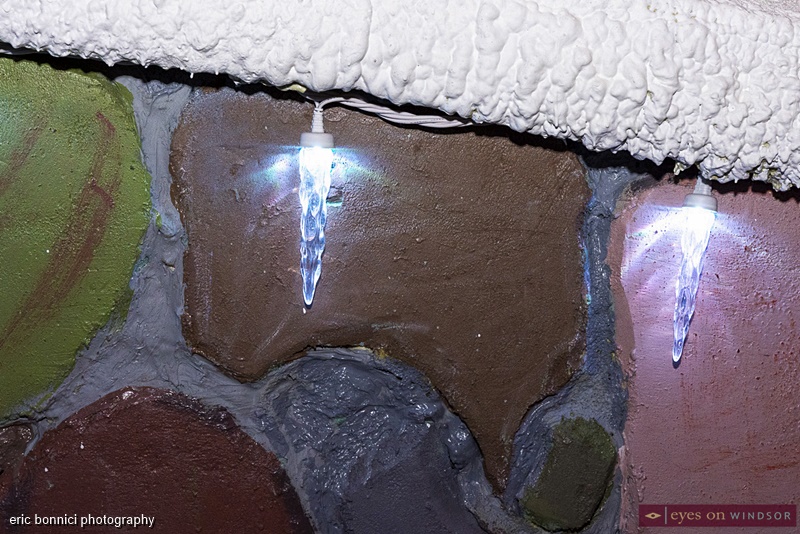 Cobblestone shaped like Windsor Essex County on Windsor Parade Corp. Santa’s Sleigh float at their warehouse in Tecumseh, ON, on Sat. Nov. 14, 2020. Photo by Eric Bonnici / Eyes On Windsor.

Bonnie says they made the Workshop Float last year. “It’s my baby, I designed and physically built it,” she explained. The workshop float was created by repurposing the “old barn” float, “the one that had reindeer heads sticking out of the side.” The float has more bells and decorations in the tree added. Windows along both sides showcase different scenes inside. Bonnie pointed out that the window featuring Santa’s Office includes a naughty and nice list. Santa’s Office was the only window with the light off. Bonnie explained that’s because Santa was not in his office. In fact, he was standing right next to us looking over the new decor. 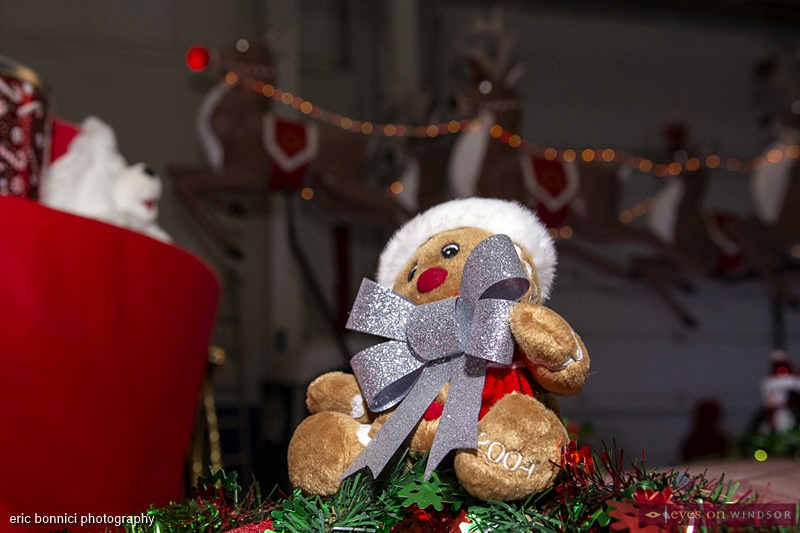 Windsor Parade Corp. Santa Workshop float at their warehouse in Tecumseh, ON, on Sat. Nov. 14, 2020. Photo by Eric Bonnici / Eyes On Windsor. 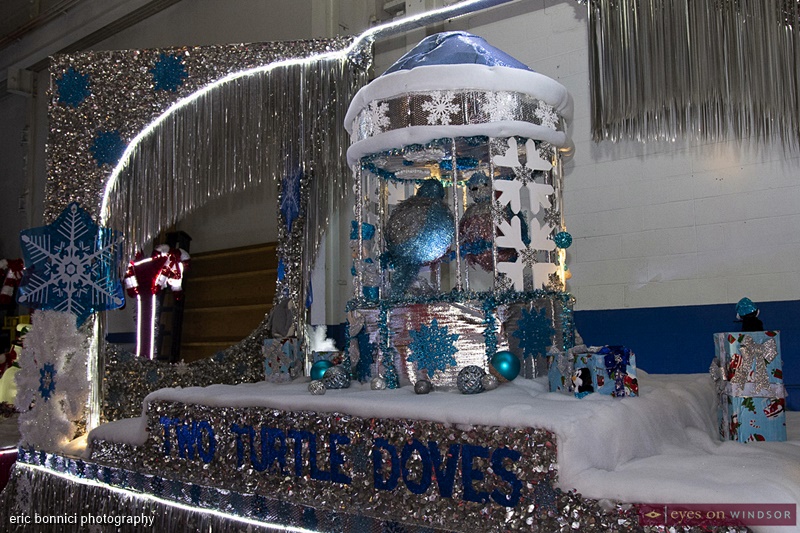 Windsor Parade Corp. Two Turtle Doves float at their warehouse in Tecumseh, ON, on Sat. Nov. 14, 2020. Photo by Eric Bonnici / Eyes On Windsor.

The Candy Cane Float has more elves and candy canes on it this year. Additional floats owned by the Windsor Parade Corp. include Winter Wonderland and Gingerbread House. 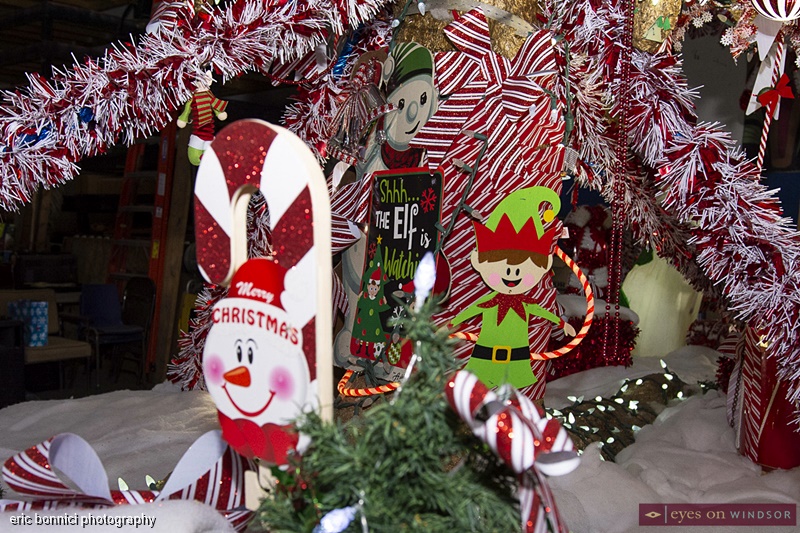 Windsor Parade Corp. Candy Cane float at their warehouse in Tecumseh, ON, on Sat. Nov. 14, 2020. Photo by Eric Bonnici / Eyes On Windsor.

“This year has been difficult, everything we’ve done has had to be outside the box, I don’t even know where the box went,” explains Durocher. While she doesn’t take credit for reverse parades, it’s something she was excited to discover while researching her options online after asking herself repeatedly, “what are we going to do?”

Unfortunately, the Town of Essex will not host a parade this year. Durocher says funds are tight at the municipality due to the pandemic and she totally respects their decision and looks forward to talking about holding a parade there again next year. She is extremely grateful to the other municipalities (Windsor, Ameherstburg, and Kingsville) for their sponsorship. 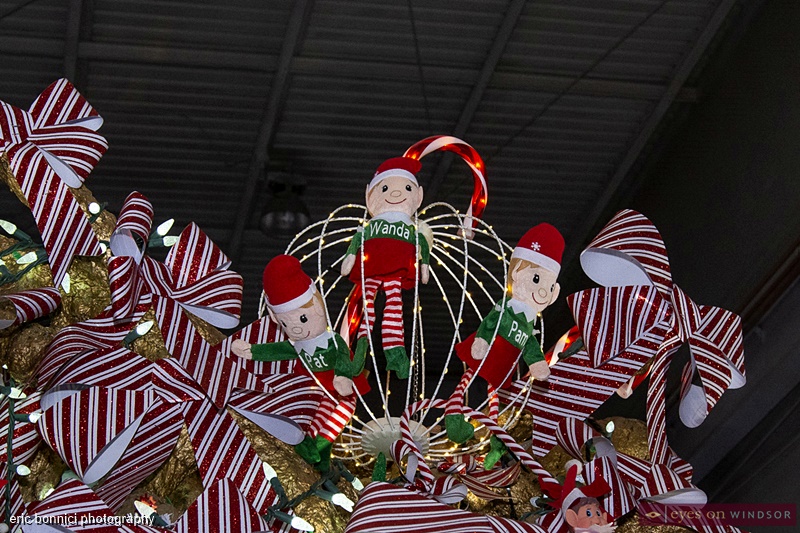 Windsor Parade Corp. Candy Cane float at their warehouse in Tecumseh, ON, on Sat. Nov. 14, 2020. Photo by Eric Bonnici / Eyes On Windsor.

Although far from a normal parade concept this “drive through reverse parade” allows for Social Distancing and is approved by the Windsor Essex County Health Unit.

Durocher says they worked with the Health Unit every step of the way for all of the parades. “We’re keeping the parade to a maximum of 35 entries. They all come in and are staged. At six o’clock we start with traffic going through and you drive by the parade. When cars check in they’re going to get a card listing all the entries. I am absolutely amazed at the level of talent that we have been able to get.”

In addition children can use the entry checklist to participate in a scavenger hunt and have the opportunity to Tune into Windsor Parade Corporation “Santa Radio” to listen to Christmas Music and Santa himself as they drive through the parade route.

Durocher says she has been regularly asked, without the American bands what are you going to spend your money on? “I’m absolutely thrilled, we have two pipe and drum bands, we have the Canadian Cowgirls coming, they have been partners of ours for years, we have Sarah Parks Horsemanship, Fire Guy, and Bex in Motion out of Toronto. We’ve got some brand new costume characters, we have these absolutely lovely floats, giant inflatables and we have community entries.”

Every parade will be set up the same. Amherstburg council approved the use of the Libro Centre. The Kingsville parade will be on their normal route. Finding a location in Windsor was a struggle. ”We were offered the back service roads at Malden Park but you kind of lose the magic there,” explained Durocher. “We wanted to keep the magic. I started looking on Google Earth and spotted St. Clair College. I reached out to John Fairely, Vice President St. Clair College, and he was so excited by the initial call. He worked with Patti France and I met with them. They were so excited for this.”

“We were 10 months into negotiations for this year’s route and when everything changed our sponsor was not interested in what we were offering, we couldn’t use the street that they wanted. So we lost our sponsor, we lost our street and St. Clair College is stepping up with a route that is outstanding.”

This Saturday Nov. 21, 2020 marks the first of three Drive Thru Reverse Santa Claus Parades, to be staged by the Windsor Parade Corporation.

The Parade in Kingsville gets underway at 6:00 pm and spectators will be permitted to access the route until 9pm. The Reverse Parade Concept involves the “Entries” staying in place while traffic passes by.

Kingsville’s parade takes place on Main Street from Spruce to Division and then south on Division to Herrington. Spectators are asked to “cue” at Kingsville District High School located at 170 Main Street. From there they will be allowed to access the route which begins at Spruce as traffic allows. 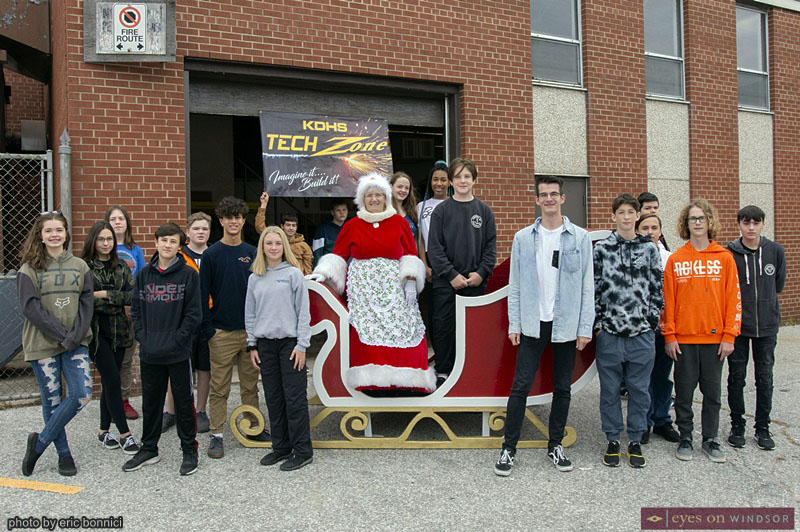