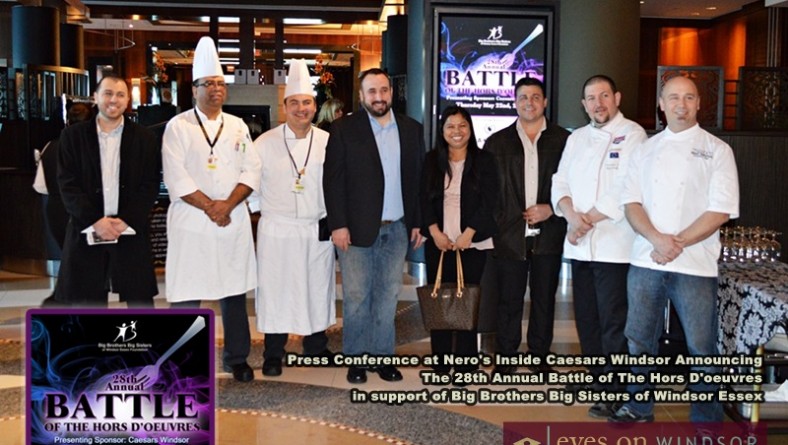 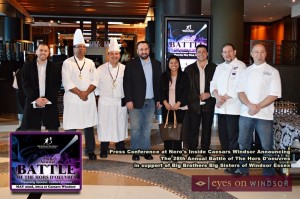 It’s almost time for Battle of the Hors D’oeuvres 2014 and 21 of Windsor Essex County’s finest food & beverage establishments want you to enjoy their savoury culinary creations, wines, and craft beer as you mix and mingle with guests around the room.

Presented by Caesars Windsor The 28th Annual Battle of the Hors D’oeuvres 2014 has been scheduled for Thursday May 22nd, 2014 in the Augustus Ballroom.

The announcement was made on Monday March 31, 2014, at Neros Steakhouse inside Caesars Windsr at a media conference organized by Big Brothers Big Sisters Windsor Essex. Last year’s winners of the Battle were on hand including The City Grill, Armando’s, and Just Jeff’s Gourmet Express. Celebrity food critic judges awarded the “Critics Choice Award” to The City Grill in the restaurant division and Just Jeff’s in the hospitality division. Guests voted for their favourites to receive the “People’s Choice Award”. Just Jeff’s won the People’s Choice in the hospitality division and Armando’s in the restaurant division. This year Armando’s, Just Jeff’s, and The City Grill will defend their titles against returning competitors and several new ones too. 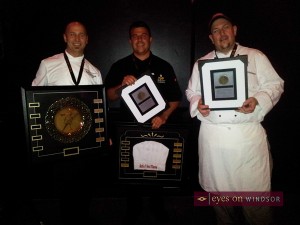 Once again there will be a People’s Choice Award in each division giving guests the opportunity to become a food critic and vote for their favourite. In addition, a celebrity panel of judges will pick the Critic’s Choice Award winner in each category. This year’s panel of celebrity judges include Chef John Kukucka (Essex Golf & Country Club), Chef Glen van Blommestein (Oxley Estate Winery), and Pina Ciotoli (Windsor Eats).

For the last few years the Battle of the Hors D’oeuvres was transformed from the traditional yearly gala banquet into a more casual and social lounge / networking type of event where guests can enjoy meeting and mingling with others. Of course plenty of seating will be available too. In addition, this unique food competition has become more popular while maintaining its loyal followers. The new “non-gala” format encourages guests to come as you are after work to lounge, network, and enjoy great food and drinks. So this year’s event, now being described as a casual indoor food and beverage festival, is expected to be bigger and better than ever!

The event will include silent auctions and raffles. Last year the Taste of Essex County raffle featured numerous restaurant gift certificates and was a crowd favourite. This year the popular raffle will return. In addition, live musical entertainment will be provided by upcoming local musician Crissi Cochrane.