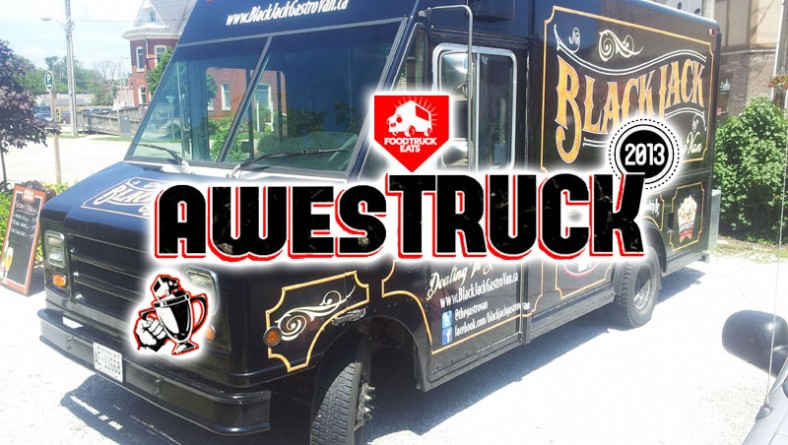 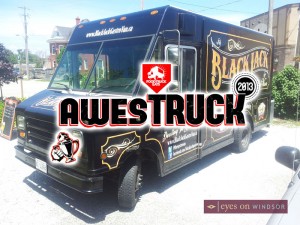 This year the organizers are presenting the largest rally of food trucks in Canadian history for AwesTruck 2013 on Saturday September 21. There will be a whopping 50 food trucks all in one location. 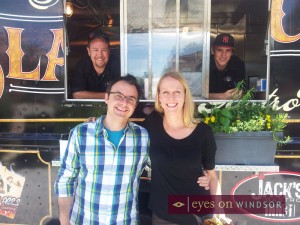 While the crew was filming inside the restaurant the Blackjack Gastrovan made it’s debut to the public while parked in Jack’s parking lot. Owner John Neil served me my first taste of the menu with their savoury and meaty Drunkin’ Chicken Wings that day. Since then the snazzy kitchen on wheels has serviced at private events like birthday parties, weddings, and the VIP Captain’s Dinner in Kingsville at the Coastal Trails Sails to See Tall Ships Festival. 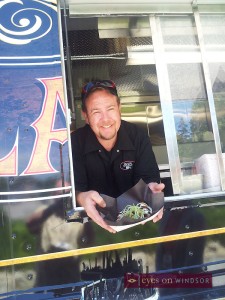 In addition, they have been at events around Essex County such as Fork and Cork 2013, Bluesfest International, and Windsor’s First Ever Burger Fest. While at Bluesfest we enjoyed their fantastic Walking Nachos (Fritos covered with BBQ pulled pork, cheese sauce, shredded cheese, sour cream, and green onions), and at Burger Fest we couldn’t believe how amazing their competition burger named The Mac Truck looked and tasted.

This gourmet burger even had a patty of Mac n Cheese, held together by deep friing it for a minute, on the patty.

Examples of other items on the menu include Mac Daddy Brisket, Loaded Spudds, Waldorf Sammich, Lua Pork Tacos, Perch Tacos, Berry Salad, and Dessert Nachos. The love and effort that is put into the menu has pleased pallets across Windsor Essex resulting in rave revues.

The competition for the best food truck in Canada has begun with online AwesTruck 2013 voting on Food Truck Eats Festival Facebook page. Despite entering the competition late Blackjack Gastrovan is more than worthy of being crowned the king of curbside Cuisine. 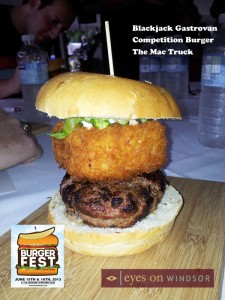 So if you’ve tried them out this summer be sure to show your support by giving Blackjack Gastrovan your vote.

You can vote for Blackjack Gastrovan once every 24 hours.

In addition, we invite you to share your experience with Blackjack Gastrovan by commenting below.