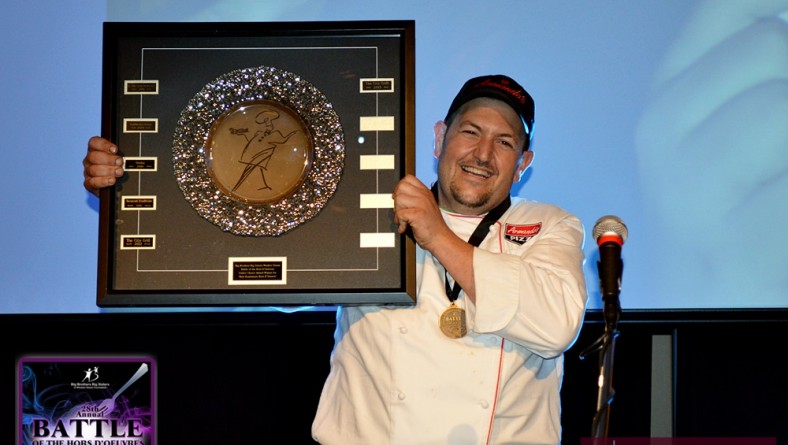 Armando’s and Parkside Grille emerged victorious among fourteen teams of chefs from some of the best restaurants and hospitality establishments in Windsor Essex at The 28th Annual Battle of the Hors D’oeuvres. The event was presented by Caesars Windsor in the beautiful Augustus Ballroom with proceeds supporting Big Brothers Big Sisters of Windsor Essex youth mentoring programs. This was the first time Parkside Grille participated in the event. Armando’s successfully won an award at the event for the second year in a row. 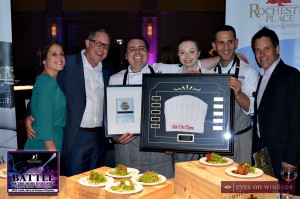 Parkside Grille’s chef Johnny Oran describes their winning hors d’oeuvre as, pulled pork stuffed with pimento cheese, breaded and deep fried, glazed with general tso sauce, topped with micro green and edamame salad with Dressed by an Olive honey ginger balsamic and toasted sesame oil. Oran was excited to accept the awards on stage but gives credit to his whole team. “I would like to give credit to the whole kitchen team at Parkside Grille including our general manager Stefanie St. Pierre and Sous Chef Chris Chittle, who worked equally throughout the whole creative process of the dish. I would also like to thank the Landscape Effects Group for helping us set up and transport everything we needed to the event for the evening,” says Oran. 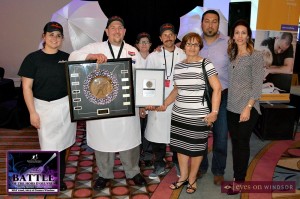 For 2014 Armando’s served their winning Vincotto Braised Short Rib With A Parmigiano Risotto. Maliza describes the hors d’oeuvre as “Parmigiano riggiano risotto, braised Essex County cremini and button mushrooms, finished with a Vincotto Demiglace.” Maliza expressed excitement when accepting the award on stage with a loud cheer, big smile, and his signature thumbs up. Maliza proudly praised his team. “I would like to thank current owner John Pizzo, original owners Antonietta and Armando Gerardi (also at the event), and my entire team which included Marie Pusz, Pina Malizia, Dean Lister and Alaina Amato,” says Maliza.

Recently, Armando’s put Windsor on the world pizzeria map placing in the top five of the four categories they entered at the 30th annual International Pizza Expo in Las Vegas. In fact, Armando’s took first place at the competition in both the regional traditional and International regional divisions.

Armando’s Pizzeria first opened it’s doors in a renovated fish and chip store in July of 1967. Armando and Antonia perfected the recipes they learned while growing up in Italy. Today Armando’s offers exceptional pizza, take-out/delivery specialties, and fine Italian dining at several locations across Windsor Essex. Chef Marco Maliza operates out of the Armando’s located at 326 Cabana Road East in Windsor. 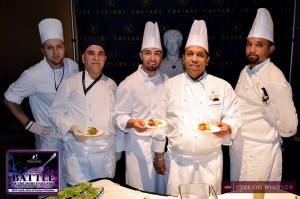 The Battle was more of a showcase than competition with a sense of comradery among the talented teams of culinary creators. Overall, it was a win-win event for everyone involved. Restaurants and hospitality businesses all received lots of exposure and praise from guests. Of course the big winners are the young people benefiting from the funds raised in support of the Big Brothers Big Sisters of Windsor Essex’s youth mentoring programs. 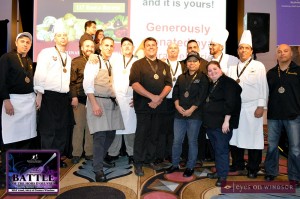 The Big Brothers Big Sisters of Windsor Essex Foundation announced on Facebook that they are “thrilled to announce that the 28th Annual Battle of the Hors D’oeuvres raised over $40,000! Congratulations to our big winners of the night, Rochester Place Resort – Parkside Grille & Armando’s. Thank you to our presenting sponsor Caesars Windsor, our event sponsors, food & beverage participants, volunteers, guests and community supporters for making this event a huge success.”

Theresa Shpak and Eric Bonnici, co-owners of Eyes On Windsor, are honoured to have supported this event as members of the Battle of The Hors D’oeuvres Committee for the second year in a row. It was a pleasure working with our fellow committee members and everyone involved with the event. 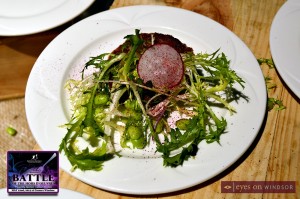 You can view all 160 photos Eyes On Windsor took at the 28th Annual Battle of the Hors D’oeuvres on Facebook.