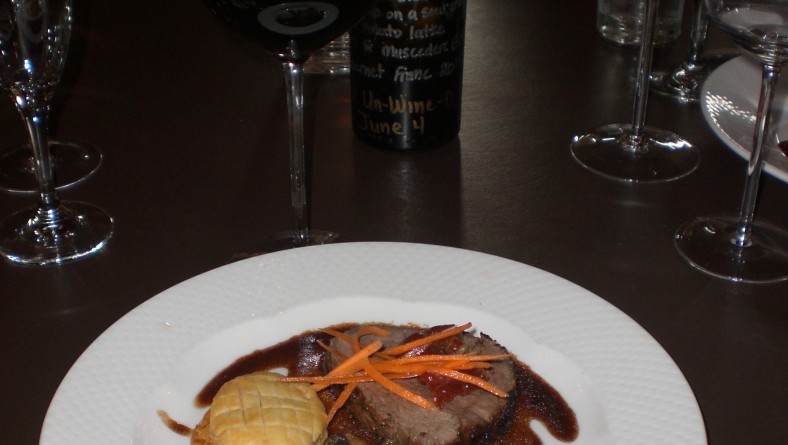 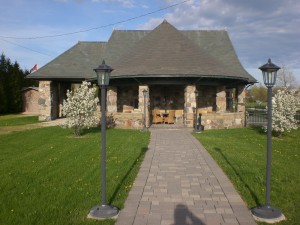 Well I have to assume Eric liked my first guest post here since about a week later he contacted me and asked me if I wanted to do an event review for him. He would get the tickets and I just had to write a post. Seemed like a good deal to me, so I agreed to attend Un-Wine-D! Tapas Style Dinner “Grown Right Here” out in Kingsville at Mettawas Station.

Immediately after saying yes I started to get cold feet. What did I just sign up for? More wine. I’m not a wine guy, I’m a beer guy. Though I did enjoy those wine parings at the First Annual Canadian Food Bloggers Conference. Tapas, that I’m cool with but at this point I have no idea what kind of food they would be serving and while there’s a lot of food I love, there’s a good portion I’m not a fan of. Most of all though, I worried about the atmosphere and not living up to expectations. For some reason tapas paired with wines at a restored train station out in the county where I’m going to meet Chef Anthony DelBrocco and his wife Janet, seemed like something over my head. It sounded pompous and elite and out of my class. I was nervous even though Eric kept insisting that this is the perfect event for a down to earth guy that just likes to eat good food. Well he was right.

Mettawas Station is a very cool restaurant. It was originally the Kingsville railway station originally commissioned by Hiram Walker. It’s a great looking stone building with a slate roof. There’s a fantastic looking patio outside and inside has a beautiful antique and wood theme. The place is very small and intimate. This was a special event but I would assume you would need reservations for dinner any night just due to limited space. We were immediately met by Janet who was happy to lead us to our seats. As there were only two of us, my wife and I, we were told we would be sharing our table with another couple.

The first thing I noticed was the relaxed atmosphere of the place. The guests that were already here were dressed pretty casually, people were laughing and ordering before meal cocktails and there wasn’t a tie to be seen. What a relief. My wife and I fit right in and all of my worry about pretense was misplaced. Though the event was high end the expectations were not, everything about it was comfortable and welcoming.

The table was laid out beautifully with a row of various types of wine glasses in front of everyone’s plates, promises of what was to come. In the middle of each table was a wine bottle and on that was written the nights menu. This for me was relief number two. No pretentious extravagant dishes with stuff I can’t pronounce and may very well not like. I’ll give all the details a bit later, but for now know my mouth was watering.

While waiting for the rest of the guests to arrive and for the meal to start people were mingling and ordering before meal cocktails. During this period we met with both Anthony and his Wife. Both were very gracious and seemed extremely down to earth. It was then that we learned that it wasn’t Anothony who would be presenting tonights meal for us but his Sous Chef Bridgette Perciballi who had prepared tonight’s menu. I’m cool with that.

The meal was four courses each paired with a different wine. Before each course Bridgette would get up before everyone and introduce the dish. As the theme this time around was “Grown Right Here” we learned that every possible part of every dish came from Ontario. It was cool to hear that the cheese was from from The Galati Cheese Company in Windsor and the asparagus from a farm in Leamington for example. After Bridgette finished, Janet would step up and explain the wine pairing. This was nice and detailed not only telling us where the wine was from but what to expect and why the pairing was made. I know, I know, enough about all this and get to the food. 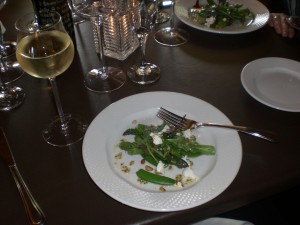 I loved the cheese on this salad. So much that I asked the wait staff if they could find out where it came from. It ends up it’s from Woolwich Dairy. The fresh asparagus was the best example of that vegetable that I’ve ever had. The most surprising to me though was that I actually liked the dressing, I usually do not like anything mustard. A very pleasant surprise. Between this meal and the meals I had at the Canadian Food Bloggers Conference, I’m now convinced that I really like Grigio wine. This was my favourite wine of the night.

I guess I really love pork belly, which just makes sense as I don’t think there’s a part of a pig that isn’t tasty. No, I don’t want to test that theory. I would have never thought to mix apple sauce and maple syrup. I would expect that combo to be too sweet but it wasn’t at all. Very enjoyable second course. The bitterness of the wine really contrasted well with the brown sugar and sweet sauce.

Wow! That is some of the best beef I have ever had in my entire life. The sauce is fantastic. Deconstructed meant that everything was separate, the beef was on it’s own as was the pastry. It was very well done as each part really got to shine on it’s own and you could easily combine them into one bite. Seriously the beef was amazing. There were also portobello mushrooms there. I am not a fan of mushrooms, but I gave them a shot. My wife even said to me “If you are ever going to like mushrooms these are them, in this sauce,” Nope still not a fan but I guess if you are a mushroom fan these were great. The wine was far too dry for my tastes but as noted I’m not a wine drinker. What I really wanted here was a nice thick Porter. 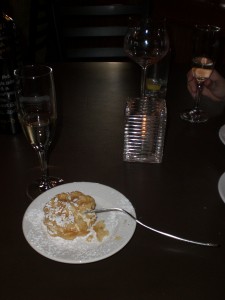 Desert was good. The best part for me though was finding out that Galatti cheese makes a ricotta. We buy their Mozzarella all the time and I didn’t know they had other cheeses. Next time my wife makes stuffed shells or lasagna I expect it to be better than ever. The Rosettes were good, not too sweet but not rich either. The Lily was good and paired well, tons of carbonation.

Am I ever glad Eric convinced me to attend this event. At first I was very nervous that my wife and I weren’t going to fit in but boy was I wrong. That was one of the most relaxed and comfortable evenings we’ve had in a long time. Not only that though the food was amazing. It was expertly prepared, tasted great and really showcased what Ontario has to offer. The wine pairings were spot on and that’s from someone who isn’t the biggest wine fan in the first place. You really couldn’t ask for anything more at an event like this. The one thing I made sure to do, after thanking out hosts was to sign up for the next event, June 4th. The theme next month is Pizza and Napa Wines. Pizza, come on, how can I not go to that?