Jack’s Gastropub first caught our attention by posting mouth-watering photos of their weekly feature burgers on Facebook. In fact, there’s lots of social buzz online about this charming establishment that serves patrons in a cozy Victorian-era home built during the late 1800s.

So on a cool afternoon back in 2011 on the first Friday of November my wife Theresa and I decided to drive from Windsor to Kingsville and try Jack’s Gastropub for the first time.

As we raced across Essex County watching the beautiful fall sunset our six year old daughter Brianna asked questions – a lot of questions. Then we pulled into Kingsville immediately sensing the charm and calmness of this historic small town. Suddenly, Brianna said, “is that it”, pointing to the building and sign that looks just like the online pictures she’s seen of Jack’s Gartropub. Upon arrival we found plenty of parking in the lot and the surrounding streets. We proceeded towards Jack’s first noticing the medium sized yet empty outdoor patio (obviously not being utilized during the cold of November). Next we noticed the eye-catching wrap around porch and people. In fact there were a lot of people inside with a few spilling outside onto the porch.

It was a busy Friday night at Jack’s Gastropub.

Upon entering the interesting decor in the foyer immediately caught our attention. You see, there’s imitation ducks (geese according to Brianna) hanging from the ceiling, a deer head wild game trophy (that Brianna pleaded to pet), and a row of hunting hats (that I’m surprised Brianna didn’t ask to wear).

To the right was a nice little bar area and reception was straight ahead with a stair case slightly to the right. The stairs led to the 3 bedroom bed and breakfast boutique known as Inn 31 also operated by Jack’s Gastropub. At this moment we noticed a busy bearded man hustling and smiling as he helped clear tables, serve food, and chatted with patrons. We later learned he was owner Trevor Loop and he gladly chipped in as part of the team when things became busy.

We were asked by the host if we had reservations. Disappointed that we drove all the way from Windsor we thought we’d have to come back another day. Luckily, we were told by the young man that he could get us in but it would be about 25 to 30 minutes. Relieved we accepted and took a quick drive around Kingsville to kill some time (and keep Brianna entertained). After all, waiting a little while for our turn to dine at an establishment people are praising is a reasonable request. Next time, we’ll be sure to make reservations especially for prime days or hours. We suggest you do the same too if you’re making a long drive across Essex County to get there.

Upon, returning the host told us they’d have a table in a couple of minutes. And that’s our only complaint because it took a bit longer than 2 minutes. In fact, we were told 2 minutes on two different occasions. It only turned out to be a little under fifteen minutes and the wait was well worth it!

You see we lucked out with the best table in the house situated in front of a charming fire place. We had a great view of the entire restaurant from there. Most importantly, the staff at Jack’s Gastropub & Inn 31’s genuine passion, specially selected local ingredients, including beef, fish, poultry, produce, craft beer, and local wine, is a big part of what made waiting worth it.

Jack’s dedication to providing the ultimate culinary experience manifested on our taste buds as we savored several delicious selections from the menu. 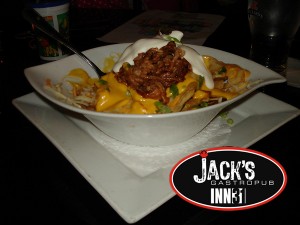 For starters, we selected the Irish Nachos which came with homemade freshly fried chips, melted cheddar, BBQ pulled pork, sour cream, and topped with green onions. The nachos looked like a colorful work of art served in a square white dish as it was placed on our table. This was the first time we’ve ever seen pulled pork on nachos. It was simply delicious especially with each melt-in-your mouth bite of pulled pork. Little Brianna enjoyed the Irish Nachos too.

Next came Jack’s sizzling gourmet burgers that we’ve heard so much about along with Brianna’s kid’s meal.

Her chicken strips and fries were more than enough to feed any aged child, they’re reasonably priced, and come with a drink and desert too. Brianna enjoyed her moose tracks ice cream.

Theresa ordered the the Jack’s burger and I had the Spicy Jack as recommended by our friend Noah Fleming, a regular patron of Jack’s Gastropub and Inn 31 (thanks Noah). Theresa’s Jack’s burger was served with succulent local beef topped with bacon, caramelized onion, fresh mushrooms, Monterey Jack cheese, and zesty Jack sauce on a fresh sesame kaiser bun. Her burger came with a side of sweet potato fries in a cute little orange ceramic flower pot. She describes it as a wonderful sweet juicy burger cooked to perfection and the most flavorful beef patties she’s ever tasted.

Immediately upon the first bite of my Spicy Jack burger I noticed the amazing flavor in the beef patties too. My choice of burger had a spicy kick in addition to the savory beef. You see the Spicy Jack is topped with lots of hot peppers, crispy bacon, caramelized onion, Monterey Jack, and Jack sauce all on a sesame Kaiser. My side was an excellent creamy order of Jack’s coleslaw. I would only recommend the Spicy Jack to you if you enjoy spicy food like me. So if you do then definitely get the Spicy Jack because it’s incredibly delicious.

The Spicy Jack went perfectly with the Stock Ale, a smooth craft beer that was recommended by our waitress. The Mill Street Brewery in Toronto makes this incredibly thirst quenching beer. You’ll find the Stock Ale is crisp, clean, cool, and tastes great. In fact, I enjoyed how the sweet malt flavor is perfectly balanced with the bitterness of the hops just as the bottle claims. The beer had just a very slight bitter after taste.

In addition to craft brew there’s a nice selection of wine too. The wine list includes some of the best in Canada including some from right in Jack’s Gastropub’s own backyard. These include varieties from the Essex Pelee Island Wine Country (EPIC) wineries like Pelee Island Winerey, Sprucewood Shores, and Aleksander Estate Winery. 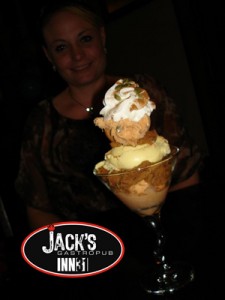 Although the food portions filled our bellies we couldn’t resist desert from Jack’s seasonal fall menu. The Pumpkin Ginger Snap Parfait is made with ginger snaps, and vanilla and pumpkin ice cream from the highly praised London Ice Cream Company. It was topped with whipped cream, cinnamon, and roasted pepitas (the inside kernel of pumpkin seeds). The ice cream was smooth, rich, and sweet. This was simply one of the best deserts I’ve tried and would highly recommend you splurge and forget about your diet for a day to try this yummy treat!

Our waitress Rochelle was fast and friendly, often checking on us to see if there was anything she could do for us.

We enjoyed the cozy home like ambiance especially on this Friday night because Jack’s Gastropub was full of smiling faces (especially at the back table where patrons were celebrating a birthday). In fact, there were a diverse range of people of all ages enjoying the food, service, and ambience of Jack’s Gastropub & Inn 31 in Kingsville Ontario.

As we headed out owner Trevor Loop hopped off of his bar stool asking how we enjoyed the meal. Surprisingly enough, during our conversation he said Jack’s has seating for up to 75 people. That’s a lot of room for what seemed like a small relaxing home-like dining establishment. But as the word continues to spread about Jack’s Gastropub & Inn 31 I’m sure seating will be at capacity especially during peak hours. Needless to say, as we learned on this particular visit, Jack’s will go out of their way to find seating for you regardless of how busy they are.

So with full tummy’s, Brianna fast asleep in the back seat, and Maroon 5’s Moves like Jagar pumping on the radio we drove through the night across the county back to Windsor.