A fleet of the most magnificent ships to sail the Great Lakes, including “Ambassador to Nova Scotia,” the Bluenose II Fishing Schooner, are making their way to the Kingsville Tall Ships Festival this weekend (Aug. 16 to 18). While Bluenose II is steeped in Canadian maritime heritage, a mobile museum exhibit will be open to the public as well. The exhibit joins the ship at each of its port destinations across Canada and was proudly built at MRA’s Canadian headquarters in Windsor, Ontario. 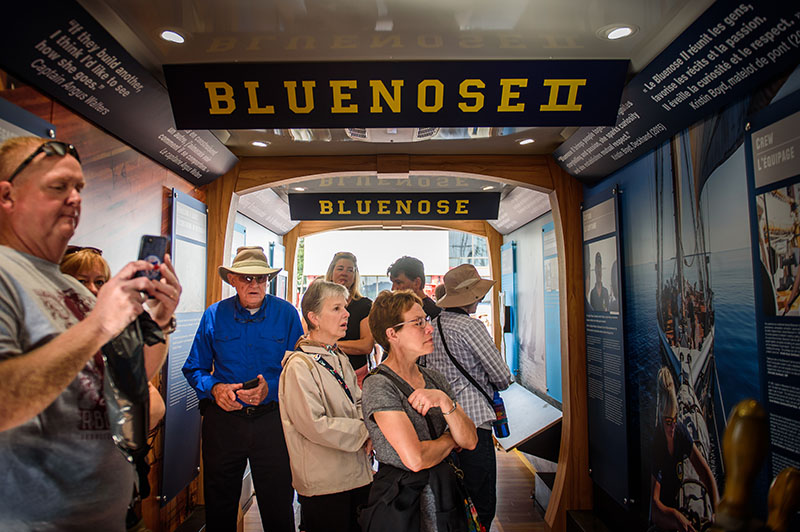 In collaboration with the Province of Nova Scotia’s Department of Communities, Culture and Heritage, MRA Canada built and developed the Bluenose II mobile museum. Housed in a 28’ custom built exhibit trailer, the fun and interactive mobile exhibit highlights information on the rich history of the schooner and its Canadian significance. Full of commanding photography, compelling stories and multimedia interactives, the exhibit helps educate visitors on the schooner’s beginnings as a Canadian icon.

“We’re very proud to have been a partner in the development of this exhibit, produced at our Windsor office, that highlights the importance of Bluenose II and the deep history the ship has with Canada’s cultural heritage,” says Tony Amato, president of MRA. 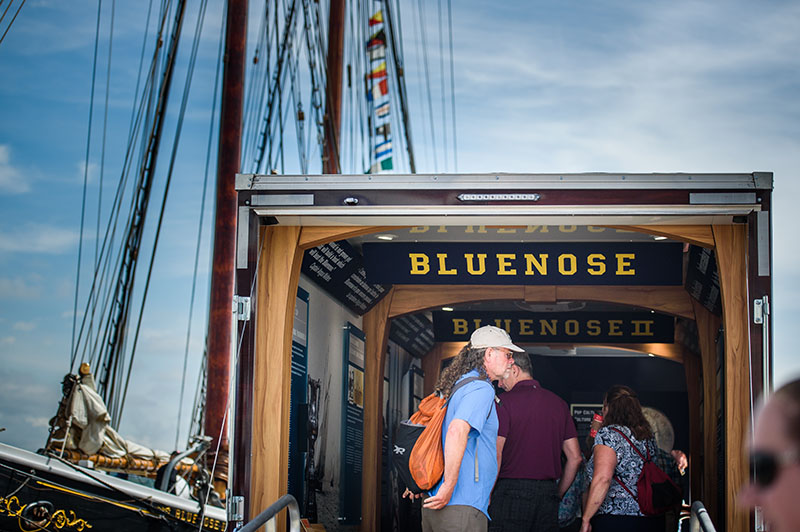 People exploring the Bluenose II Tall Ship exhibit housed in a travelling trailer while it is parked on a dock next to fishing scooner itself. Photo courtesy of MRA Mobile Experiential.

The original Bluenose was built in Lunenburg, Nova Scotia’s legendary Smith and Rhuland Shipyard to compete for the International Fisherman’s Trophy. In October 1921, the Bluenose won her first race and for the next 17 years, she defeated all contenders. In 1928, the Bluenose defeated the Thebaud in the final race series and was named Queen of the North Atlantic fishing fleet.

Bluenose II is a replica of the fishing schooner Bluenose, commissioned by Sidney Culverwell Oland and built in 1963 as a promotional yacht for Oland Brewery. Sidney Oland donated the schooner to Nova Scotia in 1971 and it became Nova Scotia’s sailing ambassador.

An interesting fact, one of many, is that the Canadian Mint changed the country’s dime in 1937, and that ship seen on the back of it is the mighty Bluenose.

The Bluenose II mobile exhibit will give visitors in Kingsville an opportunity to explore the legacy of the fishing schooner and its contribution to Canada’s maritime heritage. 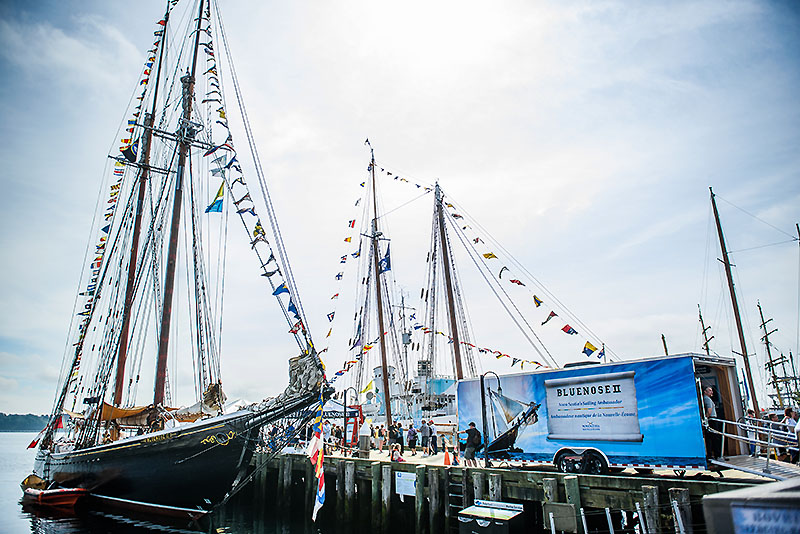 Tall Ship Bluenose II docked with a mobile exhibit honouring the fishing scooners history park along side it on the dock. Photo courtesy of MRA Mobile Experiential.

The Bluenose II exhibit will be open to the public at the Tall Ships Festival Kingsville located at the Port of Kingsville Friday, August 16th through Sunday August 18th from 12:00 p.m.-10:00 p.m. EDT all weekend.

Tall Ships Fair Jeanne, Picton Castle, Empire Sandy, HMCS Oriole and The Canadian Coast Guards Thunder Cape will be joining Bluenose II in Kingsville. The fleet is part of this season’s Tall Ships Challenge® Great Lakes 2019 race series taking place over the summer months. The Port of Kingsville is the only Canadian stop on Lake Erie this year.

The Kingsville Tall Ships Festival will include lots for visitors to enjoy including: vendors, an array of food, licensed dockside patios, live entertainment, and of course daily ship tours. Special events include a meet and greet with the captain and crew at the Captain’s Party, and a special presentation of The Flying Dutchmen by Abridged Opera.

For more information on the festival visit Kingsville.ca or the Eyes On Windsor Kingsville Tall Ships Festival event listing.