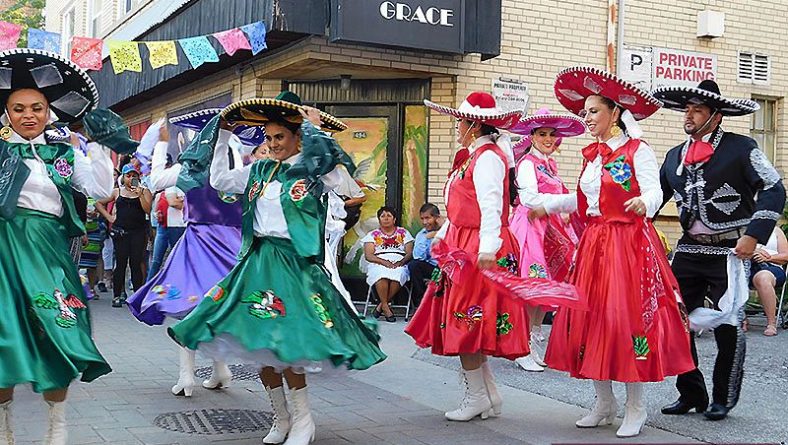 (The Joyas de Mexico Ballet dancers performed to considerable applause at Fiesta Latina in downtown Windsor on Maiden Lane on June 30, 2018. Photo above by Robert Tuomi / Eyes On Windsor.)

For the fourth time in as many years there was salsa and related dancing in the streets of Windsor’s usually laid back downtown. But, as the dancers found out, there is no universal style of salsa. The moves, although similar, particularly the gyrating hips, are actually as varied as the countries that make up Latin America. 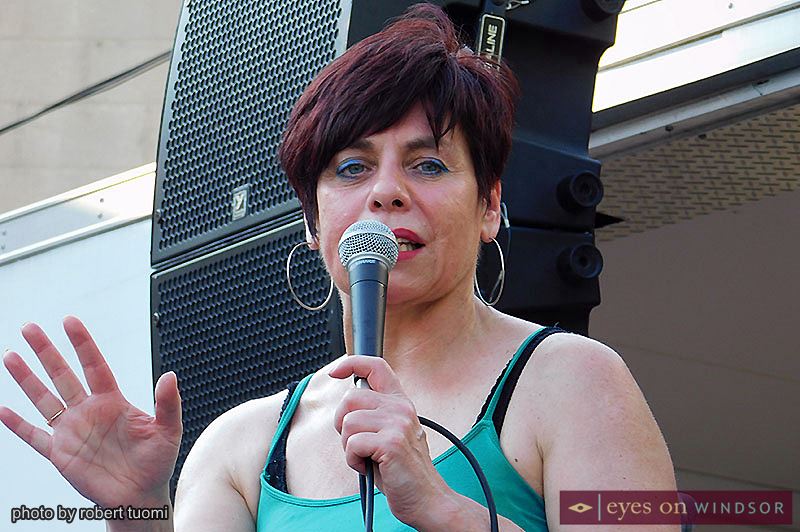 To explain all this, Windsor’s own Jenny Ingratta delivered an hour of instruction to acquaint the dancers with the subtle differences between, say the moves of Dominican Republicans compared to Cubans with their casino style. The latter traces its roots to the once popular gambling palaces that dominated the island country before its revolution in the 1950s.

Sponsored by the Windsor Downtown Business Improvement Association, Fiesta Latina took over Maiden Lane and overflowed onto adjoining Pelissier Street. There the crew from Windsor’s east end Palenque restaurant found few breaks as they sold freshly made tacos. Demand, Eyes on Windsor was told, was running neck and neck for fish, beef, pork or chicken varieties. 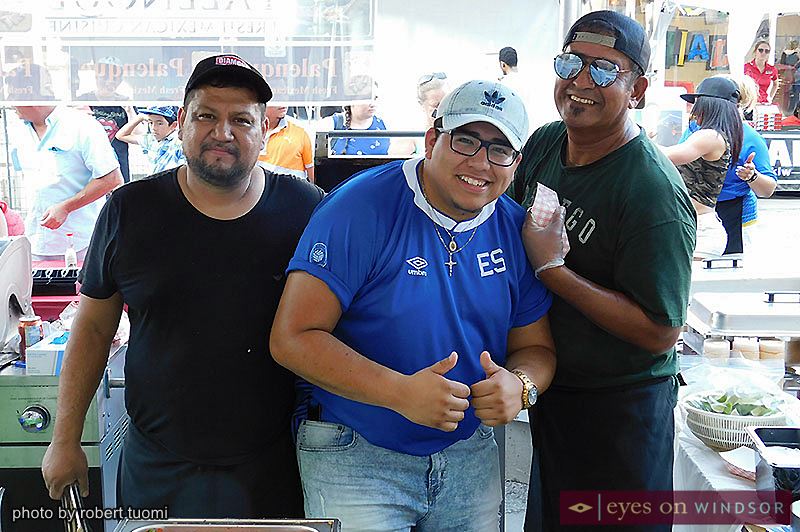 Ivan (left) Jaimie and Mincho, the crew from Palenque restaurant were busy all through Fiesta Latina in downtown Windsor on June 30, 2018. Photo by Robert Tuomi / Eyes On Windsor.

Between acts emcee Adelina Trottier, originally from Columbia, kept the audience informed and added small tidbits of cultural information. With many non-Latinas present, her explanations were much appreciated.

A crowd pleaser was the return of Joyas de Mexico Ballet. For a decade the Farmington Hills-based troupe, has been delighting audiences on both sides of the border, the Canada/US border. 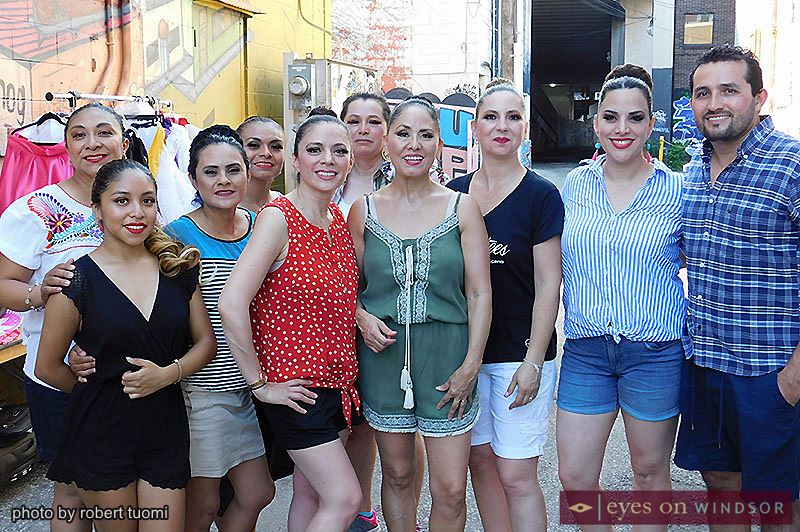 Luly del Real (in green outfit) poses with her Joyas de Mexico Ballet dancers before their performance at Fiesta Latina in downtown Windsor on June 30, 2018. Photo by Robert Tuomi / Eyes On Windsor.

Founder Luly del Real was eight when she started ballet lessons in her home town of Chihuahua. Her organization has a goal of teaching and preserving Mexican culture through dance. This is why her dancers wore authentic Mexican outfits.

Del Real was a bit worried about the effect the heavy dresses and the hot weather would have on her dancers. It was around 30C during their performance. Despite it all, they went ahead without skipping a beat. 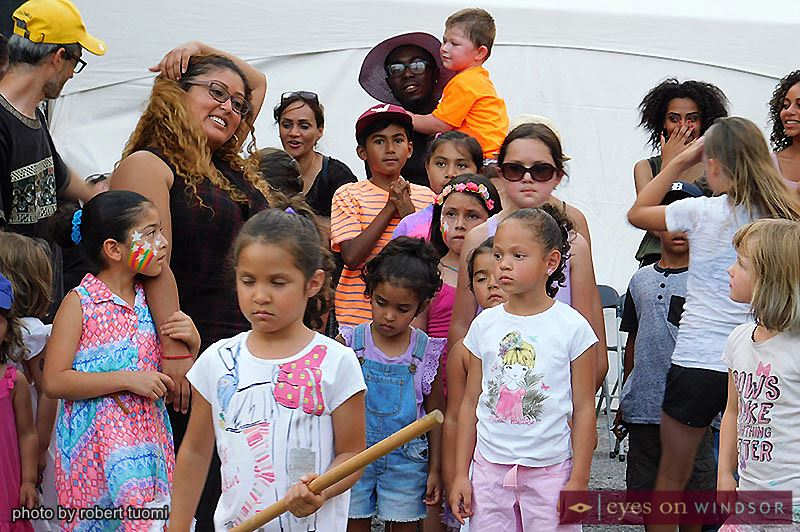 Children wait for their turn to beat the piñata during Fiesta Latina in downtown Windsor on June 30, 2018. Photo by Robert Tuomi / Eyes On Windsor.

For the youngsters, a highlight was breaking open a piñata. They lined up waiting for a turn to beat the papier-mâché container filled with toys and candy. With its integrity finally compromised, and it took a number of children with a minimum of four hits to get it that way, the street quickly filled with treats which the young ones gladly scooped up. 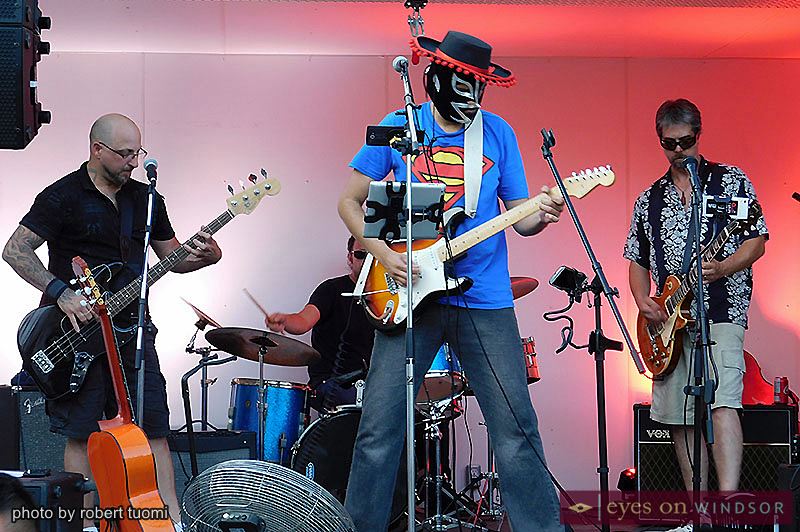 The mysterious Animasai leads Anima the Mexican fusion band as they perform at Fiesta Latina in downtown Windsor on June 30, 2018. Photo by Robert Tuomi / Eyes On Windsor.

As darkness approached two bands took over. Latina Fusion group Ánima started off. Band leader, the masked Animasai, showed a playful side. As each band member was introduced he claimed they were not all in attendance. Actually, only one was missing.