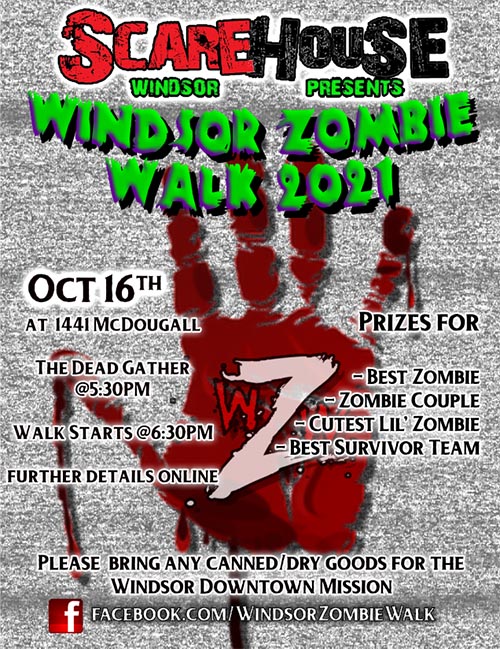 Windsor Zombie Walk presented by Scarehouse Windsor will summon the undead to the corner of McDougall and Shepherd with the hoard proceeding through Jackson Park on Saturday, October 16, 2021.

This is a free family friendly event. In addition, prizes will be awarded for the best costumes.

During the walk organizers will be taking photos of the best dressed (most disgusting) zombies and cutest little zombies. After the walk winners will be announced and prizes awarded at Scarehouse Windsor for Best Zombie, Best Survivor (individual or team), Best Zombie Couple and Cutest Lil’ Zombie (Children 10 years old and under). Prizes and trophies generously provided by Rogues Gallery Comics and The Trophy Boys will be awarded.

At 5:30pm the fun begins with collecting non-perishable food items and cash donations. Proceeds to support The Downtown Mission and Windsor Youth Centre. So please bring what you can for the needy.

At dusk, 6:30pm Windsor Zombie Walk 2021 will proceed from the Scarehouse Windsor parking lot, along Windsor Ave. and through part of Jackson Park. 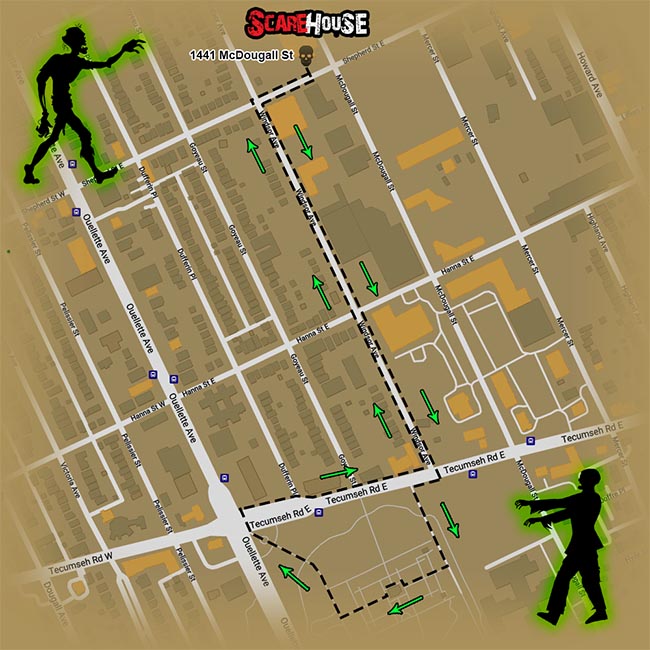 To participate all you have to do is put on your best zombie or survivor costume and bring non-perishable food items or a cash donation.

For a donation of non-perishable food items or cash people can go through the new Scarehouse add on attraction, Zombie Maze. Usually, the only way to enter Zombie Maze would be to purchase admission to the main Scarehouse Scared Evil Haunted House attraction and then pay an additional add-on admission fee for Zombie Maze (and/or the Haunted Darkness). On Windsor Zombie Walk Night, for the donations, people can head directly into Zombie Maze after the walk.

Windsor Zombie Walk is a one-of-a-kind event founded in 2006 by Jakub Witalec. The popularity of the event grew to hundreds of participants by 2013. The original organizer decided not to hold the event in 2014 because of logistics and permits required to run a large event. Instead of letting this community event come to an end, Micheal Reeve created a mascot to be the spokesperson, or as he calls it, “the ringleader whose face people can associate with Windsor Zombie Walk, someone that can interact with them.” Reeve took on the role of cursed zombie pirate Captain Hindgrinder to keep the event alive that year! In 2015 Reeve handed the event off to a new organizer who cancelled at the last minute citing a family emergency. In 2016, Reeve as Captain Hindgrinder and his undead crew rose from the depths of the Detroit River to lead the walk once again. The following year 2017, Reeve was not able to participate due to health reasons but passed the responsibility of organizing the walk to supporter Lori Deschaine. Unfortunately, in 2018 the event did not happen. Determined to keep this event going Eric Bonnici of Eyes On Windsor and his daughter Brianna Bonnici, longtime participants of the event, reached out to Reeve offering to help with the event in 2019. Reeve had already been approached by George Des Rosiers of Geekpool Windsor (a local Deadpool and Cosplay enthusiast community). Shortly after Shawn Lippert of Scarehouse Windsor reached out offering to help keep Windsor Zombie Walk alive for years to come. In 2020 the event was nearly cancelled due to the pandemic but, following government protocol, it was changed to an indoor event inside Scarehouse Windsor’s new Zombie Maze attraction. Reeve also felt the need to change the mascot and he created Big Bob, “a hillbilly redneck apocalypse survivor” who guides other survivors through a compound (Zombie Maze) that he filled with zombies. For 2021, again following pandemic safety protocol the event was once again held outdoors on city streets. The goal of Windsor Zombie Walk is to provide a family friendly and fun event for the Halloween Season and to give back to the community by collecting non-perishable food donations and monetary donations which go to support the Downtown Mission and Windsor Youth Centre.

Don’t worry these zombies are not here to feed on you but to help feed the hungry.

Scarehouse Windsor Zombie Walk To Be Resurrected On City Streets 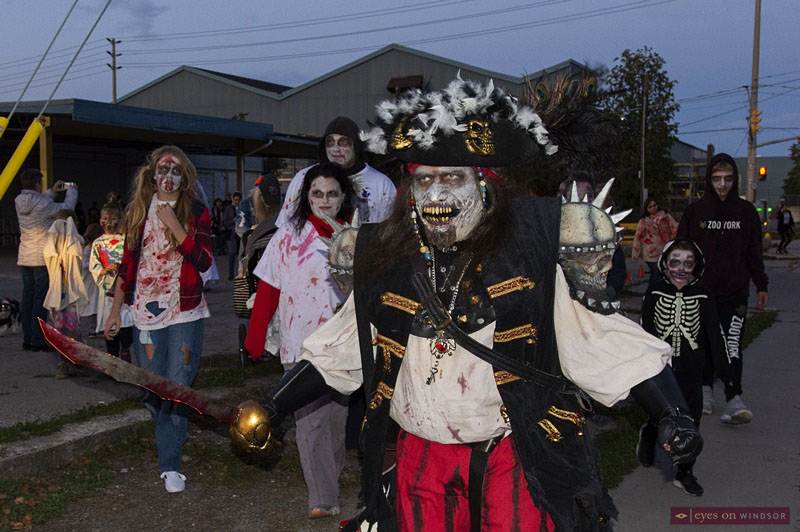 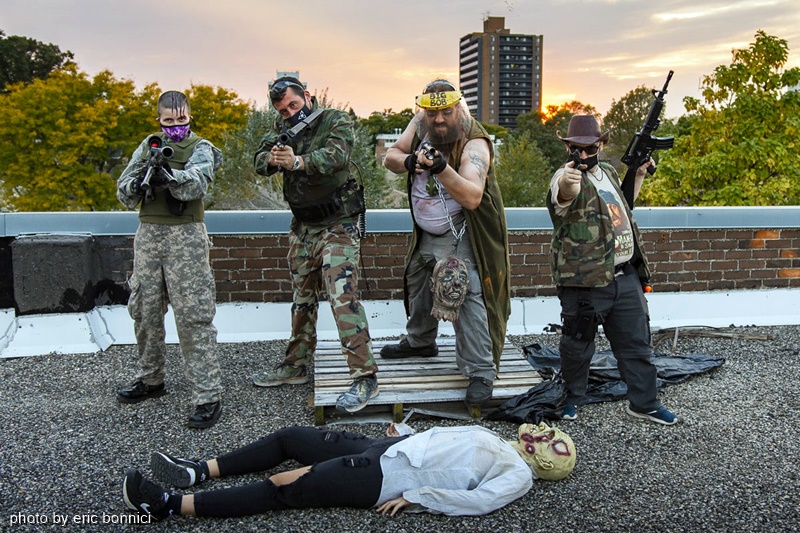 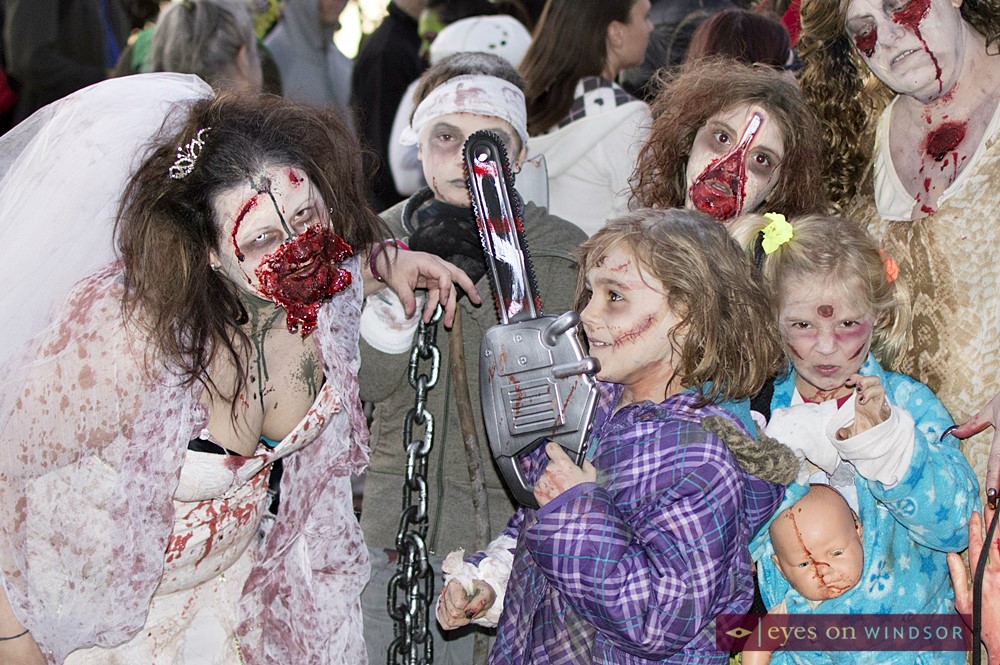 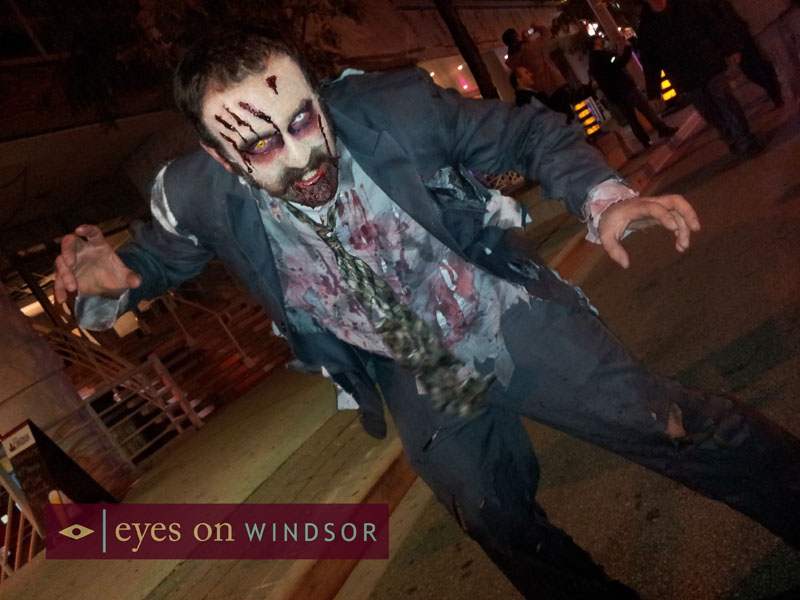