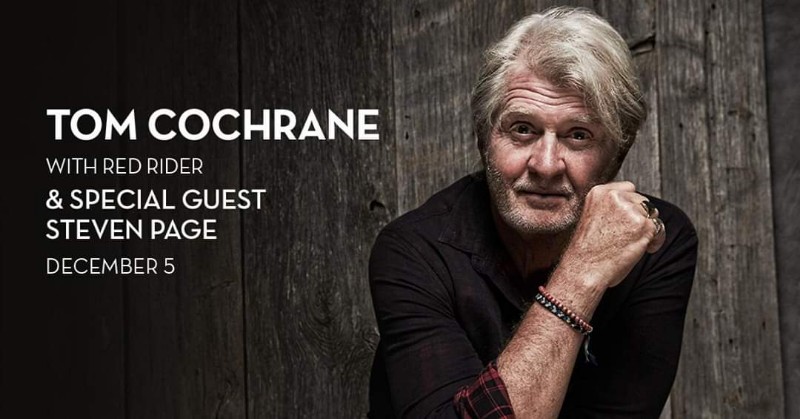 Cochrane has been a mainstay in the Canadian music scene ever since Red Rider’s debut album; Don’t Fight it in 1979. With a career that has spanned over 40 years, 17 albums, eight Juno awards and an induction into the Canadian Music Hall of Fame, Tom Cochrane is undoubtedly one of Canada’s biggest rock and roll artists.

Cochrane began his career as the frontman for rock band Red Rider and released chart-topping hits “White Hot”, “Boy Inside the Man” and “Lunatic Fringe” – a song that became one of the most played singles in the history of American Rock radio. He launched his solo career with the release of Mad Mad World, one of the top-selling albums in Canadian music history, achieving Diamond-certified status and producing such hit singles as “No Regrets”, “Washed Away” and “Life Is A Highway”, which reigned at #1 for six weeks in Canada, reached #6 on the Billboard Hot 100, and went on to become recognized the world over. Cochrane holds an honorary doctorate and has been honoured with both the Order of Manitoba and the Order of Canada.

Joining Tom Cochrane and Red Rider as a special guest is Steven Page, one of the most recognizable voices in Canadian music. As a founding member of award-winning Canadian pop/rock band Barenaked Ladies, he has lent his voice to such unmistakable hits as “The Old Apartment”, “Brian Wilson” and “It’s All Been Done”. He has released five solo albums, his most recent being Discipline: Heal Thyself Part II. Throughout his career, Page has received nine Juno awards and 19 nominations, two Billboard Music Awards and two Grammy nominations, as well as an induction into the Canadian Music Hall of Fame.