The Wolves Presented by University Players

University Players presents The Wolves by Sarah Delappe, a high-energy contemporary drama featuring fearless female fighters on the soccer field, at the University of Windsor’s Essex Hall Theatre on November 1, 2, 3, 6, 7, 8, 9, & 10, 2019.

This modern piece offers audiences a peek into the lives of today’s teenagers, and a chance to laugh and cry in equal measures. The Wolves, written by Sarah DeLappe in 2016, is a high-energy contemporary drama that chronicles the evolution of a girls’ soccer team over the course of a season. The play opens on the sidelines as the girls are firing on all cylinders, talking over one another in a cacophony of nervous energy before the match – discussing everything from world politics and feminine health, to the upcoming battle on the field. The compelling story that follows takes us on a wild journey through the season and ends with a dramatic twist that brings the girls together as a tightly knit family.

Director Heather Davies highlights the importance of the performance, “The Wolves explores themes of politics, citizenship, community and ‘the warrior spirit’. It also has echoes of Greek Theatre in it; many of the significant events occur off stage and we witness the impact of those events on stage. It’s a deftly written play from a new, dynamic American playwright that has an epic emotional scale: from war to teenage hormones and much in between.” Davies returns to UP for her third season after directing Love and Human Remains and God of Carnage in previous seasons. 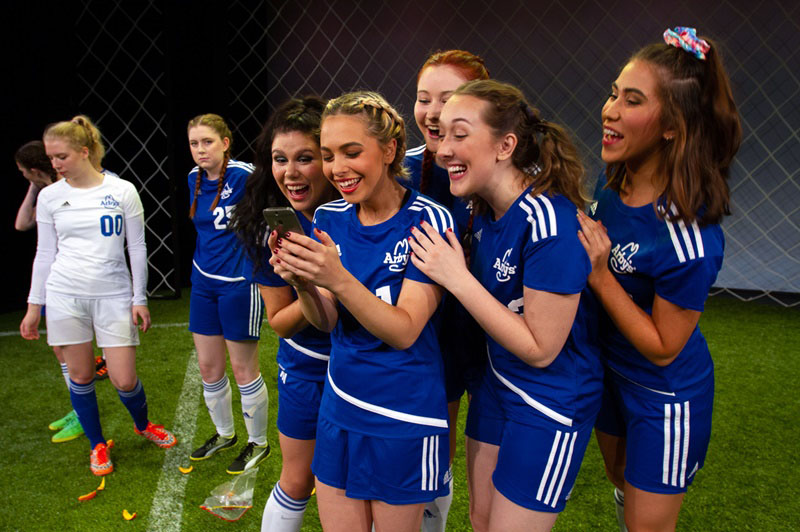 Flora Janos (centre holding cell phone) playing the role of #14 Midfield during a scene where she is surrounded by her soccer team as they look at a team photo during their performance in University Players production of The Wolves by Sarah Delappe at the University of Windsor School of Dramatic Art’s Essex Hall Theatre. Photo by Melissa Stewart / Courtesy of University Players Windsor.