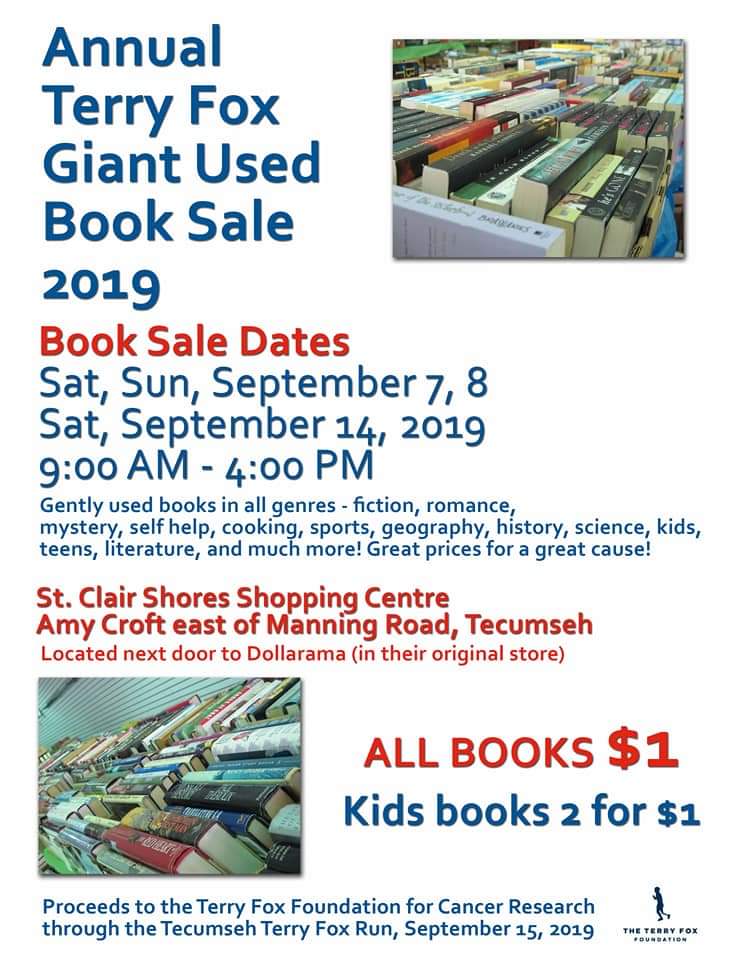 The sale takes place at the St. Clair Beach Shopping Plaza (Tecumseh Rd. E. & Manning Rd.) next to the Dollarama.

The event runs from 9am to 4pm each of the following days:

For more information or to volunteer for this event visit the Tecumseh Terry Fox Run Facebook Page or contact Marian Drouillard at 519-956-9592 or at marian.drouillard@gmail.com

Terry Fox is one of Canada’s greatest heroes. He lost part of his left leg to bone cancer at 18 years old back in 1977. Terry’s courage shined and inspired the entire nation when he decided to run across Canada in what he called the “Marathon of Hope” to raise awareness and money for cancer research. In the summer of 1980 Terry began his journey on his good right leg and artifical left leg starting at the Atlantic Ocean in St. John’s, Newfoundland. After running an average of 42 kilometers per day across 6 provinces in 143 days totaling 5,373 kilometres Terry had to end his marathon in Thunder Bay, Ontario. His cancer had spread to his lungs forcing him to stop and undergo treatment. Unfortunately, Terry Fox passed away on June 28, 1981. Terry Fox’s courage, determination and hope inspired the nation and his legacy continues to this day. Every year, millions of people in countries around the world participate in Terry Fox Runs and fundraising events.