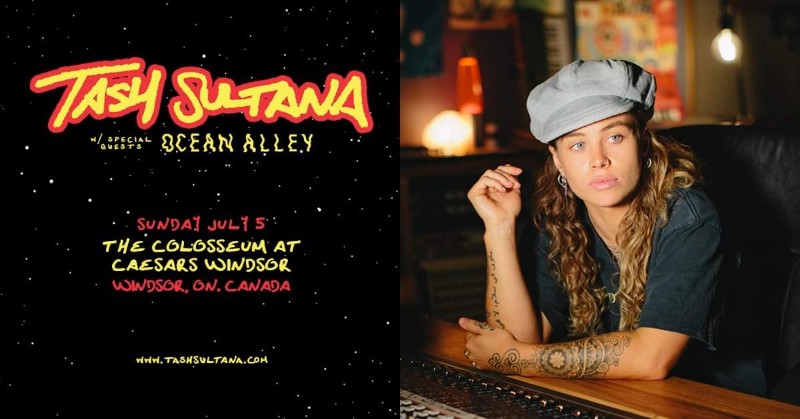 Please Note: This event has been cancelled.

As a one-person powerhouse, Tash Sultana’s career started with playing at open mic nights with a fake ID and busking in the streets of Melbourne, Australia. When a homemade video performance went viral with over one million views in five days, the dynamic young performer became a rising star in the indie scene.

Tash impressively plays all 15 instruments heard on the multi-talented 23-year-old’s latest record, “Flow State”—from guitars, bass and drums to piano, saxophone, and flute. All that skilled musicianship is buoyed by Tash’s uniquely dream-like vocals, which can be compared to Macy Gray, Norah Jones and Chris Martin, while still managing to sound solely new and original.

The recently released album, “Flow State”, moves deftly through a variety of styles and genres. From laid-back surf jams to Lenny Kravitz-style fuzz rock and everything in between, the album fully showcases Tash’s broad spectrum of musical abilities. The album debuted at #4 on the Billboard Alternative Albums Chart and also debuted on charts across the globe. Flow State was also nominated for the prestigious Triple J Australian Album of the Year award and six ARIA’s.

Continuing to broaden the global audience and appeal through incredible live performances, Tash has been featured at internationally renowned festivals such as Coachella, Governor’s Ball, Bonnaroo, Lollapalooza and Outside Lands, in addition to her recent appearances at Shaky Knees, Bottlerock, and California Roots Music & Arts Festival.

Tash recently revealed “The Story So Far”, a three-part documentary series in partnership with YouTube Music that shows the journey from bedroom performances and busking to sold-out world tours.

Ocean Alley, one of Australia’s most exciting touring acts, have captivated audiences around the world with their infectious melody lines and memorable blend of psychedelic-surf-rock.

Don’t miss your chance to rock with Tash Sultana and Ocean Alley live! Tickets start at $28