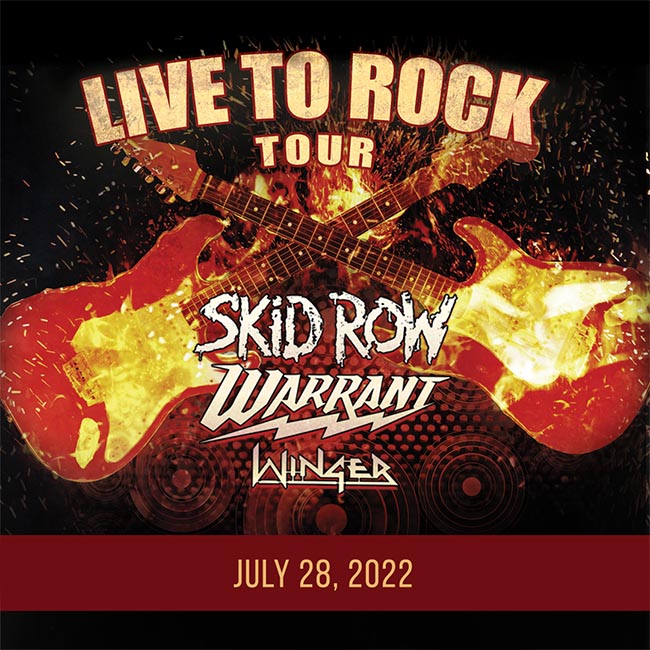 Live to Rock Tour with Skid Row, Warrant and Winger is set to hit The Colosseum Stage at Caesars Windsor on Thursday, July 28, 2022.

Hailing from New Jersey, Skid Row’s first rebellion started in 1986. Their second album, Slave to the Grind, debuted at No. 1 and went multi-platinum. Refusing to grow old, Skid Row’s combination of classic dual-guitars, charismatic vocals and “us-against-them” mentality, helped propel the band to lasting heights in the late 80’s, early 90’s and today.

Rambunctious exuberance at the forefront, a unique catalogue including hit songs like “18 and Life”, “I Remember You”, and “Youth Gone Wild” continues to set the soundtrack to Skid Row’s musical coup d’état.

Warrant gained international popularity with their double-platinum debut Dirty Rotten Filthy Stinking Rich. The chart-topping power ballad “Heaven” reached No. 1 in Rolling Stone and No. 2 on the Billboard Hot 100. Glam metal in nature, the band’s catchy, yet melodic sound, has blazed the trail for over 30 years of sweet surprises, including five albums reaching worldwide success with international sales of over 10 million.

Experience the glitz and glamour of tracks like “Cherry Pie”, “I Saw Red” and “Uncle Tom’s Cabin” among other hard rock offerings, sure to have you singing.

When former member of Alice Cooper’s band, bassist Kip Winger formed his own group in 1986, Winger was born. The American heavy-metal band soared to popularity through their employment of glam metal and progressive metal elements. Two platinum albums, Winger, and In the Heart of the Young, set the band on a path to continued success, amplified by charting singles “Seventeen”, “Headed for a Heartbreak”, and “Miles Away.”

In 1990, Winger was nominated for the American Music Award’s “Best New Heavy Metal” band. That same year, the band released In the Heart of the Young – selling over a million copies. The “hair band (version of) Dream Theatre,” toured off the success of their second album, including a 13-month stint playing over 230 dates with legendary names like Kiss, Scorpions, ZZ Top, Extreme and Slaughter!

Don’t miss out on seeing the spectacle, with Skid Row, Warrant and Winger on the Live to Rock tour.