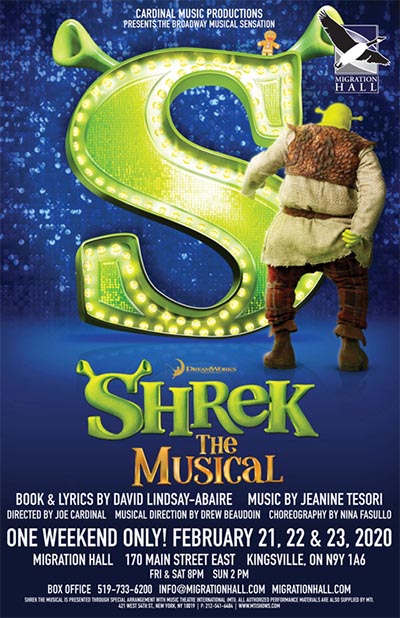 Cardinal Music Productions presents Shrek The Musical, the Tony Award-winning fairy tale adventure based on the Oscar-winning DreamWorks Animation film, at the Green Room Theatre inside E.J. Lajeunesse on February 7, 8, 9, 14, 15, & 16, 2020.

The musical will also be performed for one weekend only at Kingsville’s Migration Hall on February 21, 22 & 23, 2020.

“Everyone’s favourite ogre is back in the hilarious stage spectacle based on the Oscar-winning, smash hit film.”

Shrek The Musical features all new songs from Jeanine Tesori (Thoroughly Modern Millie; Caroline, or Change) and a sidesplitting book by David Lindsay-Abaire. Shrek brings all the beloved characters you know from the film to life on stage and proves there’s more to the story than meets the ears.

“Once upon a time, there was a little ogre named Shrek….” And thus begins the tale of an unlikely hero who finds himself on a life-changing journey alongside a wisecracking Donkey and a feisty princess who resists her rescue. Throw in a short-tempered bad guy, a cookie with an attitude and over a dozen other fairy tale misfits, and you’ve got the kind of mess that calls for a real hero. Luckily, there’s one on hand… and his name is Shrek.

Shrek presents a treasure trove of creative opportunities, including costumes, sets, puppets (there is a fire-breathing dragon after all) and more! Irreverently fun for the whole family, Shrek proves that beauty is truly in the eye of the ogre.

Tickets For The Kingsville Show

Tickets for the Windsor show are available at the Cardinal Music box office at 2569-B Jefferson Blvd. or by calling 519-944-5800. Tickets will also be available at the door. Tickets also available online at https://migrationhall.com/shrek-the-musical/ 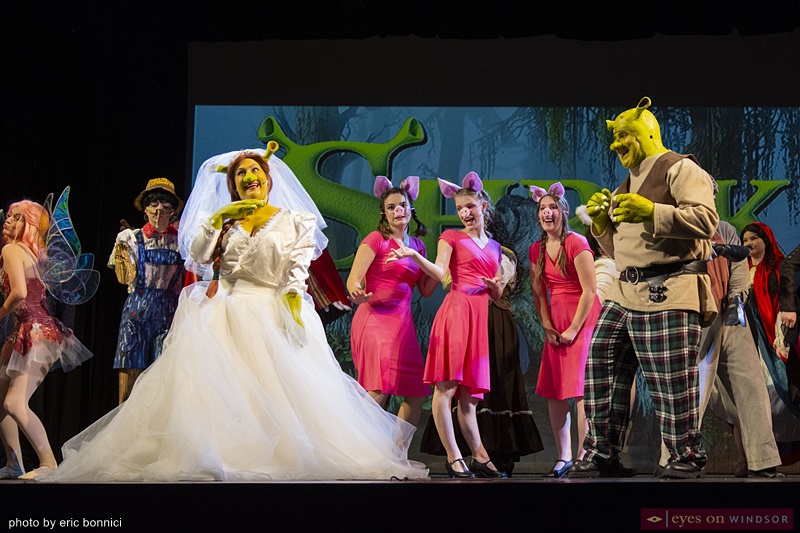 Cast members singing I’m A Believer during rehearsal of Cardinal Music Productions’ presentation of Shrek The Musical at the Green Room Theatre inside E.J. Lajeunesse High School in Windsor, Ontario, on Thursday, February 6, 2020. Photo by Eric Bonnici / Eyes On Windsor.