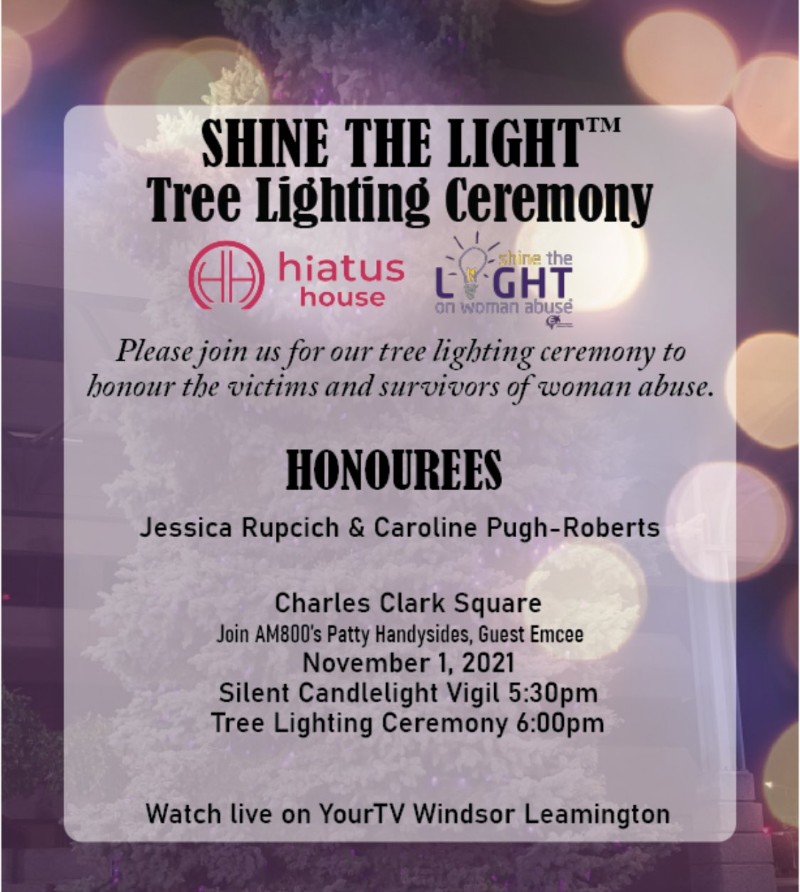 Hiatus House Windsor hosts the 7th Annual Shine The Light On Woman Abuse Tree Lighting Ceremony in Windsor at Charles Clark Square on Monday, November 2, 2020. This year the event will be live streamed on Facebook and YouTube.

Join Hiatus House on their online livestream as they illuminate a tree in purple to honour victims and survivors of woman abuse and welcome this year’s honourees, survivors Brittany Genovese and Udona Desjardins.

The tree will remain illuminated in purple for the month of November as a symbol to victims that they are not alone and as an emblem of courage to help all women and children live violence-free.

About The Shine The Light On Woman Abuse Campaign

November is Woman Abuse Awareness and Prevention Month in the Province of Ontario. Shine the Light on Woman Abuse is a public awareness campaign developed in June, 2010, by the London, Ontario, Abused Women’s Centre. The campaign runs each November throughout the entire month. The goals of the Shine the Light on Woman Abuse campaign are: To raise awareness of men’s violence against women by turning the city of London (and cities across the country) purple for the month of November; To stand in solidarity with abused women and support them in understanding that any shame and/or blame they may feel as a result of the abuse they are experiencing (or have experienced) does not belong to them but to the perpetrator of their abuse; And to raise the profile of community agencies that can provide abused women with help as they attempt to live their lives free from violence and abuse.

Hiatus House of Windsor has held the Annual Shine The Light On Woman Abuse Tree Lighting Ceremony in Windsor since 2013.