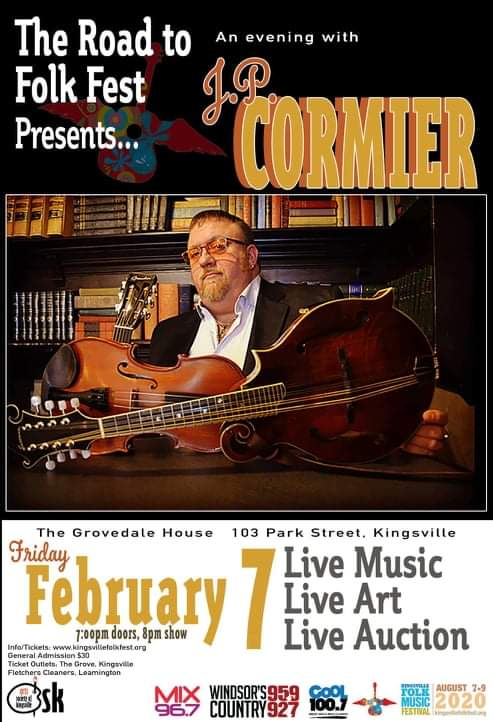 J.P. Cormier is a true musical genius. At age five, he began teaching himself to play the guitar. At nine, he won his first guitar competition against 30 other players four times his age. By his mid-teens, he was playing a variety of stringed instruments, including the fiddle, mandolin and banjo. He recorded his first album of bluegrass instrumentals at 16, which led to 10 years of living and performing in the United States. His time there included many memorable nights at the Grand Ole Opry with artists such as Waylon Jennings, Marty Stuart, Earl Scruggs, Bill Monroe, Charlie Louvin and Vince Gill.

By the mid-1980s, not out of his teens, he was a sideman for bands and artists of many different genres in Alabama, Tennessee, Mississippi, and all across the deep south. As he travelled and worked he added more and more instruments to his arsenal of capabilities. He became indispensable to the bands he worked for.

In the early-’90s, he became a sideman for Stompin’ Tom Connors and also became a staple of the recordings at Studio H in Halifax. His work with the CBC there spanned musical, production and arranging duties. All this before he was 20.

In the mid-’90s he re-entered the musical scene of his beloved East Coast and the Island called Cape Breton. He exploded onto the traditional music scene there as a fiddler, performing some of the most difficult music ever produced by legends like Winston Fitzgerald and Angus Chisholm with a facility that stunned onlookers.

In 1997, he released the album Another Morning, which featured him as a songwriter and a lead singer. Some of the performances on that album are literally part of the musical vocabulary today in the East Coast. Songs like the title cut, and Kelly’s Mountain, The Molly May (co-written with his cousin Gervais) and others.

Sixteen albums followed the success of Another Morning, winning 12 more ECMAs, another Juno nomination, a Canadian Folk Music Award and five Music Nova Scotia Awards. Each album was a snapshot of each thing that he can do. There are fiddle albums, Mandolin, Banjo, Guitar, tribute records, songwriting collections, a purely astounding spectrum of talent and musical vision.
His catalogue of recordings and the 150 or so records he’s produced on other artists, resemble the tapestry he weaves in live performance. Where he used to carry three and four-piece bands, he tours alone now. Just him and the instruments.

The evening will also feature six Arts Society of Kingsville artists creating original art throughout the evening. Artwork will be auctioned off at the end of the night!

Proceeds to support the Kingsville Folk Music Festival and other artistic endeavours in the area. The Folk Festival celebrated its sixth anniversary this past August and gets bigger and better every year.

All ages show with guests 16 and under admitted free.

The Grovedale House is located at 103 Park Street, Kingsville, ON

About Road To FolkFest Concert Series

The Road to FolkFest Concerts present some of the best Canadian and International talent: Festival favourites and high-profile touring acts. Road To FolkFest Concerts are a fundraising project for the Sun Parlour Folk Music Society (Kingsville Folk Music Festival). This project has been made possible in part by the Government of Canada.

The Sun Parlour Folk Music Society exists to provide diverse high quality folk music through concerts and the annual Kingsville Folk Music Festival and allocates funds to the MAY FUNd (Music and Arts for Youth) which provides financial assistance to disadvantaged area youth to access the arts through workshops, lessons, mentoring sessions and an annual scholarship.