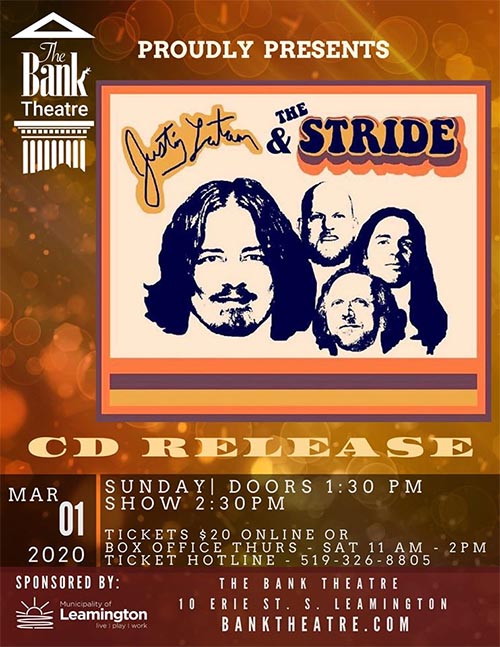 Justin’s new record was funded by generous donations for his “Empties4Recording” campaign in which he collected ’empties’ from local restaurants and bars as well as from family and friends in the community.

Known as Leamington’s “Barefoot Musician”, Justin will be joined by his band (The Stride) – Brett Humber, Benny Pallotto, and James Staley. Justin Latam and the Stride is a barefoot journey into rock n roll.

Born and raised in Leamington, ON- Justin Latam (known locally as the barefoot musician) has been charming audiences for the last 14 years. In 2015, he left his day job (and shoes) behind to follow a path as a working singer-songwriter. At the end of a last coffee house shift as a barista, the shoes came off, the bare feet came out, and he hasn’t looked back since. It was a risky move. Justin and his wife have five children and leaving a steady job meant he would have to work tirelessly at music. From 2015 on, the barefoot musicians been juggling music and family, playing 100+ shows/year. 2015 also saw the release of his album Barefoot. Funding for the album came from a Barefoot In Your House Tour, where he played in fans’ homes. The album charted on Canadian campus radio. This was followed by his acoustic-based EP, Six which he promoted on his Ontario Tour 2018.

Latam has many influences that have helped him find his sound, among them; the Beatles, Leonard Cohen, Simon and Garfunkel, Led Zeppelin, Nirvana, Joni Mitchell, and Crosby, Stills Nash and Young. He was exposed to much of this music as an infant when his parents played their records without turning the volume down. From these sources, Justin offers up barefoot-stomping music with honest heart and soul, blending folk, rock, blues, jazz, and pop into a down-to-earth, upbeat sound. The lyrics of his songs range from exploration of everyday life, love, and family, interpreting local folk history and Canadiana, and thoughtful introspection.

As a child, Justin remembers discovering his dad’s old sketches and silkscreens in their shed. To provide for his family, his dad boxed-up his artistic dreams when he had kids and got a steady job. Then, when Justin was 10 years old, his dad lost his job. He turned this obstacle into an opportunity to rediscover his art and turned art into his job as a full-time silk-screener, photographer and sign-maker. His experience and example instilled in Justin the drive to pursue music, with the hopes to inspire his children to follow their own paths, whatever they may be.

When he’s not out somewhere making music, Justin is a family man, spending time with his large crew. His wife is an amazing woman who believes and encourages him. When his head is in the clouds, she reminds him to keep his bare feet on the ground. For more info about Justin visit www.justinlatam.ca