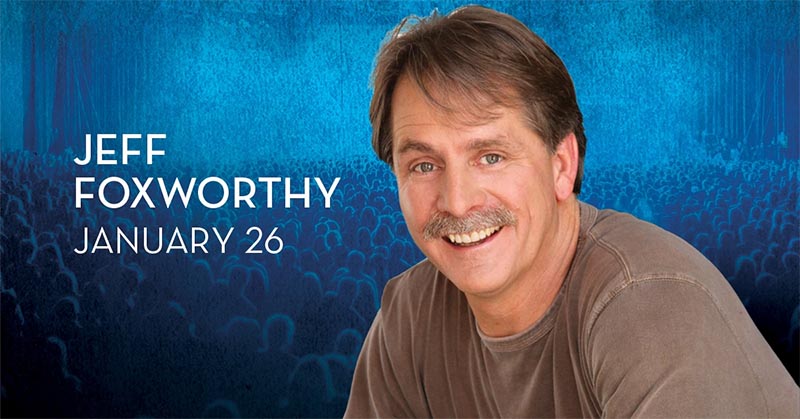 Stand-up comedian, actor and television personality, Jeff Foxworthy, will perform on The Colosseum stage at Caesars Windsor on Sunday January 26, 2020.

As one of the most respected and successful comedians in the country, Jeff Foxworthy is the largest selling comedy-recording artist in history, a multiple Grammy Award nominee and best-selling author of more than 26 books. Widely known for his redneck jokes, his act also explores the humour in everyday family interactions and human nature, a style that has been compared to Mark Twain’s.

Jeff Foxworthy is one of the judges on the new NBC comedy competition show Bring The Funny, and was one of summer’s hit shows. He has his own comedy channel Jeff and Larry’s Comedy Roundup on SIRIUSXM, which showcases the best in great American comedy. He has a comedy special We’ve Been Thinking which is currently available on Netflix and most recently released a game called “Relative Insanity” which uses bits of his material for lots of game time fun. In addition to all of this he continues his live performances across the country.

For several seasons Jeff Foxworthy hosted the FOX television game show Are You Smarter Than A 5th Grader, including its return to primetime this past fall. He hosted three seasons of The American Bible Challenge for GSN, had an animated series Bounty Hunters on CMT, hosted the reality series The American Baking Competition for CBS Television Network and narrated the Lifetime reality show The Week the Women Left.

With his iconic “you might be a redneck” one-liners, Foxworthy, the multi-platinum comic legend is sure to bring an evening of hilarity.