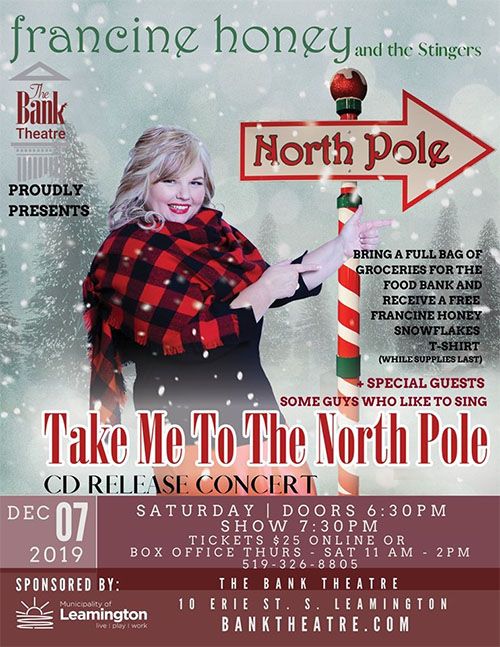 Francine Honey’s “Take Me To The North Pole” Album Release Concert with her band The Stingers with special guests Some Guys Who Like To Sing takes place at The Bank Theatre on Saturday, December 7, 2019.

Like the lead single, the album Take Me To The North Pole showcases Honey’s love of all things Christmas. “We brought a nice mix of Christmas songs on this record with an Americana and Country flair,” she says. “I love recording with Neilson and the band down in Nashville.” Cut in Nashville with Grammy-nominated producer Neilson Hubbard (John Prine, Mary Gauthier, Jason Isbell) and first-call players like guitarists Will Kimbrough, pianist Dan Mitchell, and bassist Dean Marold, “Take Me To The North Pole” takes Honey’s mix of Americana, Country, Rock, Canadiana, and Blues. Honey’s mentor Verlon Thompson plays guitar on the album and during the recording, Honey commented how much she loved his original holiday song My Heart Is There With You. “I couldn’t believe it when he said that I could record the song if I wanted to!” Honey was floored, she says, “I was so touched! Verlon taught me the rest of the song and we recorded it then and there. What an honour that was and to record that song with Verlon was one of those magical moments you hear about in Nashville. Who knew it would happen to me!”

Now, “Take Me To The North Pole” takes Francine’s listeners on a journey. The title track, Take Me To The North Pole is a Honey original which swings with a southern swagger and a call to escape the real world of today into the fantasy world of the North Pole; Blue Christmas, Honey’s favourite Christmas song displays Elvis’s influence in her music with some cool all-male harmonies; and is followed by the rockin version of Let It Snow. Christmas Round My Tree is an original song which deals with those who are struggling with being alone during the holidays and the desire of a parent to simply have the kids come home for Christmas. This is followed by Honey’s version of some classical Christmas songs; Its The Most Wonderful Time Of The Year, a rockin version of Santa Claus Is Coming To Town and then Honey’s tender vocals are highlighted in a bilingual version of Silent Night Sainte Nuit. This brings us to Honey’s final written Christmas wish in song, with My Heart Is There With You, a song written and played by Verlon Thompson.

Honey’s 2018 full-length album “to be continued” received critical acclaim and was a finalist in the 2018 International Songwriting Competition in 2 categories for her song Stay. Honey was also recognized for her song-writing contribution from more than 19,000+ entries around the world, receiving semi-finalist nominations in both the Americana and Blues categories.

Honey’s music has received critical acclaim and sees airplay on CBC, Radio-Canada, AM800, CTV, SiriusXM, Folk Roots Radio, and more across Canada, the US, UK, Germany, Australia, and the Netherlands. Her over 20k+ fans online are very happy she left her government career to pursue music full-time. She performs regularly on-line and streams every venue performance.

Her belief that music gets you through life and her commitment to helping people feel less alone by sharing life through song connects people across the world to support each other. Her campaign last year to touch those suffering from grief through the holidays with her song and video Snowflakes On My Eyelashes and the French counterpart garnered over 1.5 million views, but most importantly connected people grieving from all over the world. It’s no wonder that the video for Snowflakes On My Eyelashes is a finalist in the UK Songwriting Contest.

Tickets are $25 and available at The Bank Theatre Box Office at 10 Erie Street South in Leamington, Thursday – Saturday 11 am – 2 pm weekly, by calling the hotline at 519-326-8805 or online at www.banktheatre.com

Bring a bag full of groceries for the food bank and receive a Francine Honey Snowflakes T-shirt while supplies last!