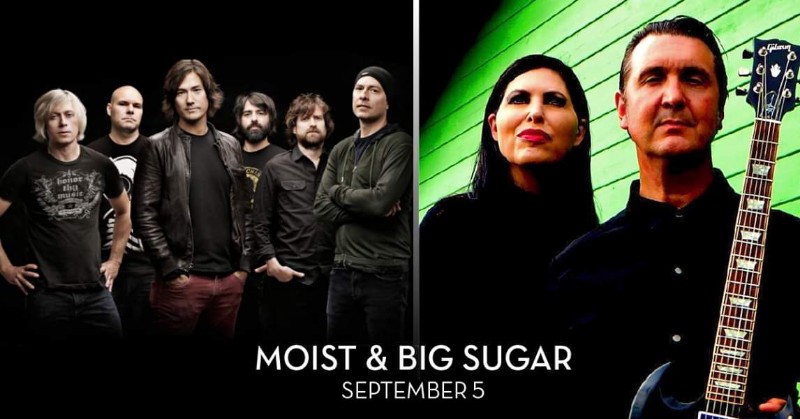 Canadian bands Moist and Big Sugar will rock The Colosseum stage with an all ages show at Caesars Windsor on Thursday September 5, 2019.

Juno award-winning Moist reunites as they celebrate the 25th Anniversary of their debut album Silver. The multi-platinum Canadian rock band formed in 1992 releasing three studio albums in the 1990s creating hits like “Push”, “Leave it Alone”, “Resurrection” and “Breathe”, becoming a staple of Canadian music culture. In 2013 the band reestablished after a hiatus for over a decade and released their fourth studio album Glory Under Dangerous Skies.

Closing out the show will be multi-platinum recording artist Big Sugar led by vocalist Gordie Johnson and his signature double neck Gibson guitar. The band have a unique roots, rock and reggae signature sound that has produced hits like “Diggin’ a Hole”, “The Scene” and “Turn the Lights On.” The leaner, cleaner, present day Big Sugar’s new album Eternity Now is uplifting and full of resolve, whilst addressing the realities of a hard life lived and survived. Big Sugar still rock the house to keep fans dancing and playing air guitar but whatever you thought this band was, let it go. The title of the first track “Anything is Possible” states it best.

Tickets start at $28 Canadian and are on sale now!