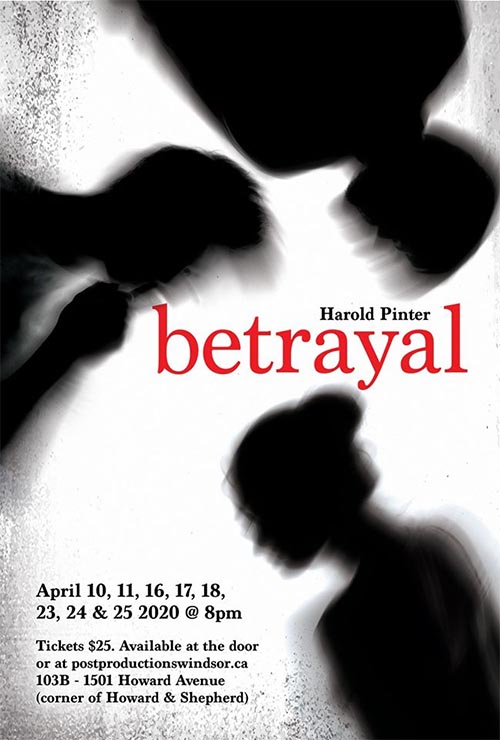 Post Productions presents the most celebrated play, Betrayal, a heartbreaking tale of romance gone wrong because of the lies we tell each other and ourselves by Harold Pinter, at The Shadowbox Theatre on April 10, 11, 16, 17 & 18, 2020.

Betrayal is written by one of the most celebrated English playwrights of the 20th century: Harold Pinter. Since its premiere in 1978, Betrayal has gained a reputation as a heartbreaking tale of romance gone wrong because of the lies we tell each other and ourselves – of everything we say or don’t say.

The story revolves around Emma, Jerry, and Robert. In 1968. Emma (Fay Lynnbegan an affair with Jerry Dylan Md), the best friend of her husband, Robert (Michael K. Potter). The affair is kept under wraps for four years until, on a vacation to Italy, Emma confesses to Robert – but doesn’t tell Jerry she has confessed. Robert does not reveal to Jerry that he’s found out about the affair, either. As events unfold, as secrets and lies are revealed, we’re left to wonder about what really counts as intimacy, the destructive potential of love, the corrosive effects of time, the unreliability of memory, and what reinforces and eats away at love and loyalty in human relationships.

With most scenes taking place in a reverse chronological order, the play begins in 1977, two years after Emma and Jerry’s affair has ended – and ends in 1968, just as the affair is about to begin. The effect on the audience is unique, as in nearly every scene the audience knows far more about the future of each character than the characters could predict, the characters know the past events that led to that point while the audience does not, and each character has information about the others that they don’t share.

Post Productions is thrilled to bring this incisive, emotional, and thought-provoking play to The Shadowbox Theatre for Windsor-Essex audiences to enjoy. Get your Tickets today!