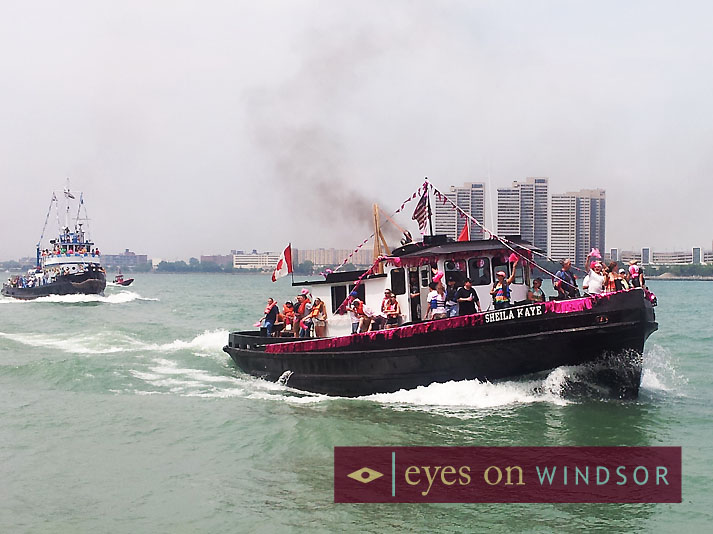 The 43rd Annual International Tug Boat Race takes place along the Detroit River on Windsor’s riverfront with an after party just east of Dieppe Park at Battagello Walkway on Saturday, June 22, 2019.

The normally sedate Detroit River comes alive with roaring diesels and blaring air horns when tug boats of all sizes race for glory and trophies in the 43rd annual International Tug Boat Race.

The race begins at 1 p.m. at the Ambassador Bridge and runs to the finish line off Windsor’s Dieppe Park. Trophies are awarded to the first tug to finish the race as well as to each tug that finishes first in its horsepower class.

It is the most unusual tug race anywhere. As many as 30 tugs of all sizes race in a mad dash for the finish line. Tugs ranging in length from 45 to 140 feet compete at the same time, all muscling for the best position. Some of the larger tugs are actual working tugs with more than 2,000 horsepower. The Detroit River boils as the tugs create a huge wake.

The race features tugs from all over the region — from tugs based in Detroit to others that arrive from Lake Huron ports just to participate in this great tradition.

Tug boat racing on the Detroit River dates back to the 1950’s and was originally a loosely organized event. For many years the event was discontinued until 1976 when the International Freedom Festival started the tradition once again. In 2003 the International Freedom Festival declared bankruptcy and the future of the race was in limbo. Local Detroit tug man Brian Williams, with the help of numerous companies, individuals and the Detroit and Windsor Port Authorities was able to organize the event, keeping the long standing tradition alive.

Spectators can watch the race from anywhere along its route. Among the top viewing spots is at the finish line at Windsor’s Dieppe Park. Tugs dock in Windsor for the awards ceremony.

“I love tug boat racing,” said Williams. “I’ve been doing it myself for seven years. My father has been doing it since the ‘70s.”

He said it’s just as exciting to watch from shore as it is to participate aboard a tug.

“How many tug boats do you ever see in one spot?,” he asked. “There’s no kid out there – and people in general – who doesn’t think a tug is cool. Twenty or so tugs running at full speed is something you don’t see very often.

“When you are on the tug, you’ve got a 3,000-horsepower engine screaming under you. There’s the thrill of actually being on a tug boat, and the waves. It’s a good time,” he said.