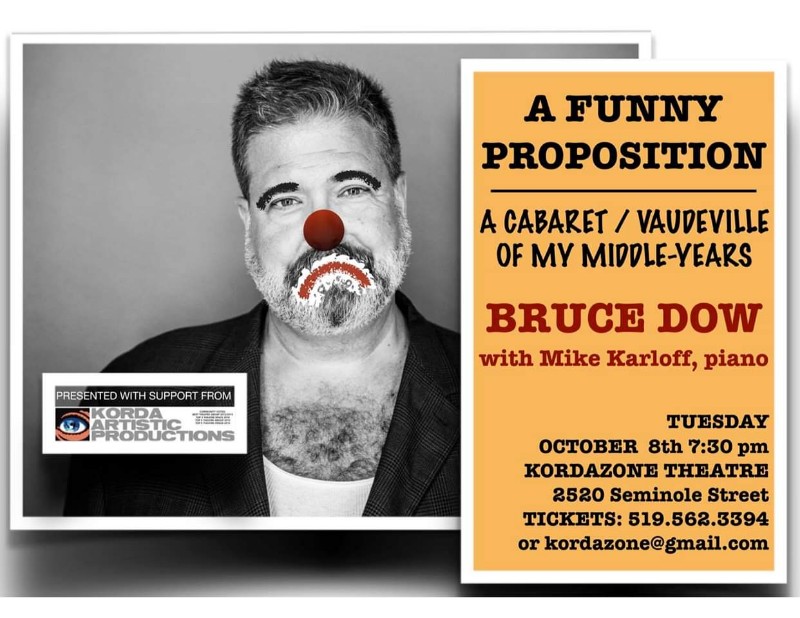 Catch Dora Award Winning, Broadway Bound, Actor/Singer, and Stratford Festival Veteran, Bruce Dow in A Funny Proposition, a cabaret / vaudeville of the middle-years with Mike Karloff on piano, for one night only at Kordazone Theatre on Tuesday, October 8, 2019.

What is more ridiculous than middle-age? Certain experiences are expected, but we are truly prepared for none of them. Aging parents, divorce, new love, starting again while in the middle of the journey? Life as a clown, lost in a never ending vaudeville, faced with a series of show- cards – the show must go on – no matter what’s next!

Developed by Mr. Dow over years of presenting very personal cabaret experiences, A FUNNY PROPOSITION sold out & wowed audiences at both Stratford Summer Music and in Prince Edward County as part of the Festival Players 2018 season.

Bruce Dow has appeared on Broadway in Jane Eyre, The Music Man, Anything Goes, Jesus Christ Superstar, and has just finished a pre-Broadway workshop of DIANA, a new musical from the creative teams behind the ®Tony Award Winning COME FROM AWAY and MEMPHIS which will open at the legendary Longacre Theatre, Spring 2020.

Mr. Dow has received 2 Dora Mavor Moore Awards for his work at Buddies in Bad Times Theatre; a Helen Hayes Nomination for his work in A Funny Thing Happened on the Way to the Forum for the Shakespeare Theatre Company, Washington, DC; has appeared in leading roles in Shakespeare and musicals over 12 seasons as a member of the acting company at the Stratford Festival. He recently received his 4th Dora Award nomination for his work in Dr. Silver, a celebration of life for Outside the March and Musical Stage Companies.

Mike Karloff is one of Windsor/Detroit area’s most versatile and in-demand pianists. Comfortable in any genre from classical to jazz, Michael performs regularly with the Windsor Symphony Orchestra, Detroit Symphony Orchestra, 4th Wall Chamber Music Series, Windsor Light Music Theatre and Jazz at Mackenzie Hall. Recent performance credits include “A Night With Renee Fleming at The Detroit Opera House”, “Music of Jewish Composers” with the WSO, and “The Dave Bennett Trio” at The Sacremento Hot Jazz Jubilee and “Penticton Jazz Festival”. Michael is a musical director and instructor for music theory and ear training in the Musical Theatre Performance program at St. Clair College. Michael is also a part-time professor of jazz piano and skills classes at the University of Windsor.

A FUNNY PROPOSITION is independently produced and is available for additional bookings.

Tickets are $35 per person and available online through Eventbrite or at the Kordazone Theatre Box Office or by calling 519-562-3394. 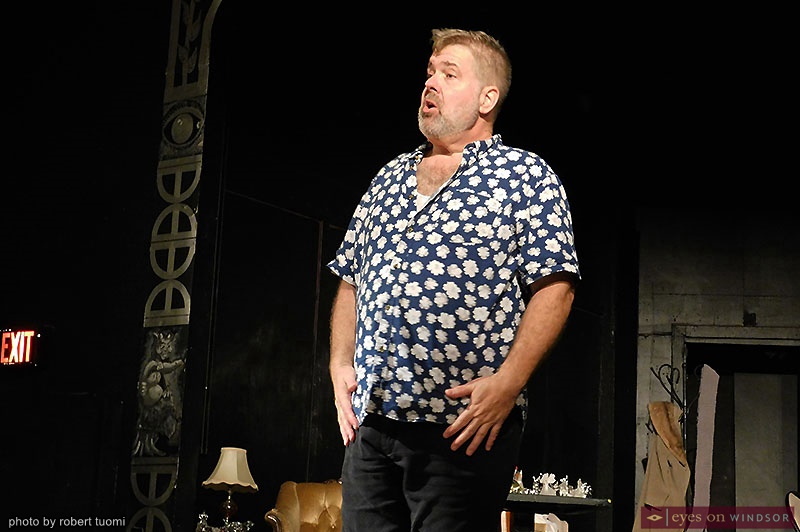 Bruce Dow performing during A Funny Proposition, his one-man show with piano accompaniment, at Kordazone Theatre in Windsor, Ontario on Tueday, October 8, 2019. Photo by Robert Tuomi / Eyes On Windsor.