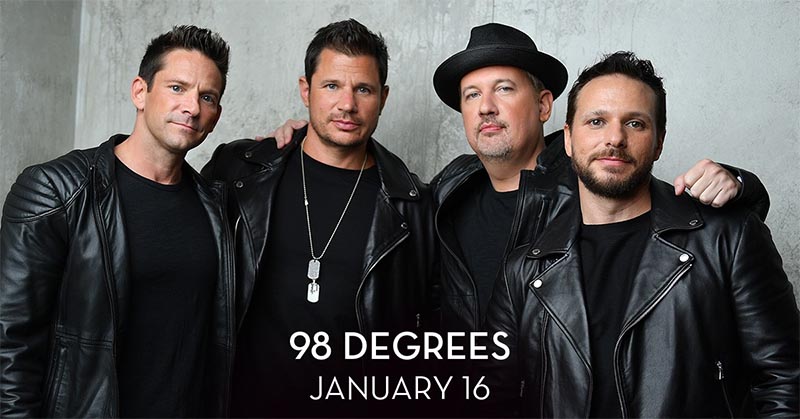 Contemporary R&B group 98 Degrees bring their – An Evening with 98 Degrees Tour to The Colosseum stage at Caesars Windsor on Thursday, January 16, 2020.

This 1990s breakthrough boy band gained popularity from their appearance in the animated Disney film Mulan and collaborating with label mate, Stevie Wonder on “True to Your Heart.” They differentiated themselves from many of the other teen bands at the time as they wrote much of their own material, which reflected their own R&B influences. Their album 98 Degrees and Rising went 4x Platinum and spawned 98 Degrees’ first major platinum hit “Because of You” along with other fan favourites such as “I Do” and “The Hardest Thing.”

After taking a hiatus for over a decade, the quartet decided to reunite, first touring with New Kids on the Block and Boyz to Men in 2013 and then headlining their own 38-city My2K Tour in 2016. Most recently, 98 Degrees released their first full length Christmas album in 18 years, Let it Snow. The album featured the group’s signature R&B tinged, four-part harmonies and was a natural follow up to their 1999 multi-platinum selling This Christmas.

Don’t miss your chance to have An Evening with 98 Degrees live!