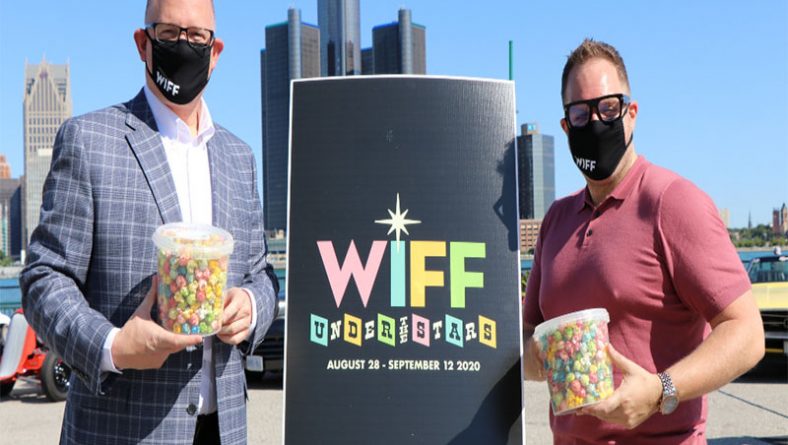 Understandably, local festivals have been cancelled for 2020 because of the current pandemic, leaving the community, including WIFF goers disappointed. “Everyone has had a tough few months,” said Vincent Georgie, Executive Director of WIFF. So organizers of WIFF have come up with a retro-way to get out of the house and enjoy some fun flicks. “Let’s give people some escapism, adventure, comedy, and romance and ride out the summer with some fun and style.”

“We know there’s a pent up energy, a demand in the community, people want to get out and they want to enjoy the community and the summertime in a safe way, and frankly have a new experience,” said City of Windsor Mayor Drew Dilkens.

Dilkens reminisced about the exciting experience of going to the Skyway Drive In movie theatre here in Windsor as a kid, a place he said many people at the press conference were far too young to remember. The Skyway operated from around 1948 to 1985.

“As far as I know, the Windsor area used to have four drive-ins: three were owned by the Dydzak Family: Skyway Theatre on County Road 42, the Windsor Drive-In on Walker Road near Highway 3 and one in St. Clair Beach,” says Elaine Weeks in her article published on the Windsor Then Windsor Now website. “There was also the Famous Four, where Silver City Theatres are now located on Walker at Provincial Road.”

Mayor Dilkens and the City Council were on board with “WIFF Under The Stars” the moment Georgie approached them. “To have that experience here in the city in such a great space like the one we’re standing in was easy to get behind and support,” says Dilkens.

To ensure safety, vehicles will be reasonably spaced apart and people will not be allowed to leave their vehicles with the exception of using the washroom. Masks must be worn and social distancing is required when using the restrooms.

Popcorn, pop, and small concession items will be available for purchase and must be ordered from a volunteer that will come to your vehicle.

The movies are fan favorites from the past few decades. The most modern film on the schedule, from 2020, The Cuban, will be screened on Labour Day weekend.

“A little bit of old, a little bit of new, there’s something for everyone,” said Georgie. This includes 10:00am family matinees on select dates ($20 per vehicle) and evening double features starting at 7:45pm with 15 minute intermissions between shows ($40 per vehicle).

WIFF Under The Stars Schedule

Double Feature
A League of Their Own
The Impossible

Double Feature
Crimson Tide
The Silence of The Lambs

Double Feature
The Cuban
Shall We Dance

Double Feature
The Hand That Rocks The Cradle
The Others

Georgie said tickets are expected to fully sell out by the time “WIFF Under The Stars” starts.

For more information or to purchase tickets visit: https://windsorfilmfestival.com

Event Listing: WIFF Under The Stars