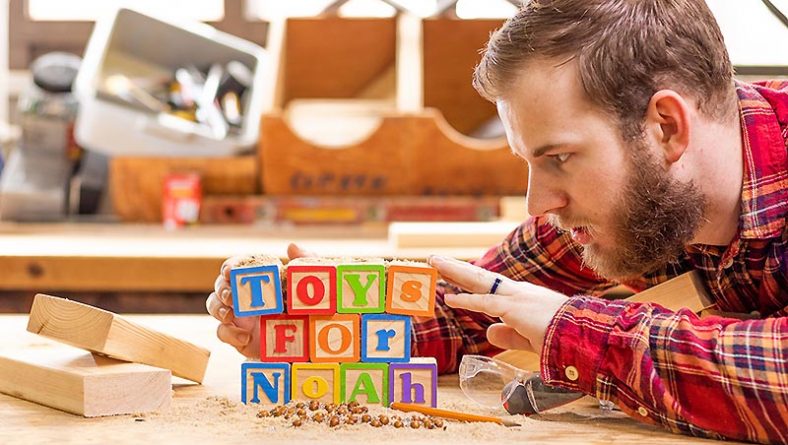 Coleton Dénommé a recent Bachelor of Fine Arts Acting graduate of the University of Windsor, is bringing an exciting expanded version of Toys For Noah to the Windsor Walkerville Fringe Festival for it’s professional debut.

Coleton is the writer, director, and star of Imagine That! Theatre Collective’s production of Toys for Noah. Originally performed during the University of Windsor’s Character Study 2018 presentations, the Fringe Festival edition will include an even richer story.

Coleton recently took the time to tell Eyes On Windsor about the upcoming show in an exclusive interview.

What is your background in theatre?

I’ve been involved with theatre ever since I was four years old when I started acting in school plays. I was heavily involved in both my school drama department and community theatre throughout high school – even writing and directing my own projects. I decided to pursue my dreams and attend the Acting program here at the University of Windsor. Since graduating, I have continued to work professionally in the industry as an actor, writer, and director. 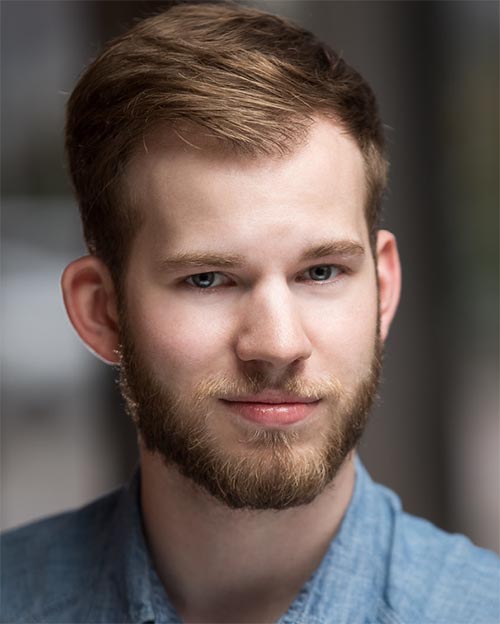 What is the storyline of Toys For Noah?

Toys for Noah follows the story of newlywed woodworker Joe Montferrand and his young son, Noah. This is the first time Joe is letting his son into the family woodshop, and Joe can’t wait to begin passing down all of the stories and traditions that his French-Catholic parents passed down to him. From lessons on toymaking and even a lesson on swearing, Joe teaches his son how to be a good man, and learns some things about being a better father along the way.

How did Toys For Noah come about?

I actually had the story concept for Toys for Noah in my mind a year before I had to do the (Character Study) project. To me, the most interesting characters come when you combine a piece of yourself with something that you yourself could never be. In this case I combined my love of children and my strong family values and French heritage with elements of a woodworker – I had always been terrified of shop class when I was younger. I was scared of cutting off my fingers.

Toys for Noah is partly inspired by the stories of my grandparents as well as one of their friends who I knew as Monsieur Rivard. M. Rivard was a very kind man living in Pain Court who made these beautiful wooden sculptures and creations and donated them out of the kindness of his heart.

When I first performed Toys for Noah as a Character Study it was extremely well received. Paula Wing, our professor and an alumn of reputable theatres such as Soulpepper and the Tarragon called it “magical” saying that it was “So relatable and warm. Bravo.” Both her, and director of the School of Dramatic Art, Dr. Tina Pugliese, recommended that I take this show to Fringe festivals across the country. Where better to start than right here at home? 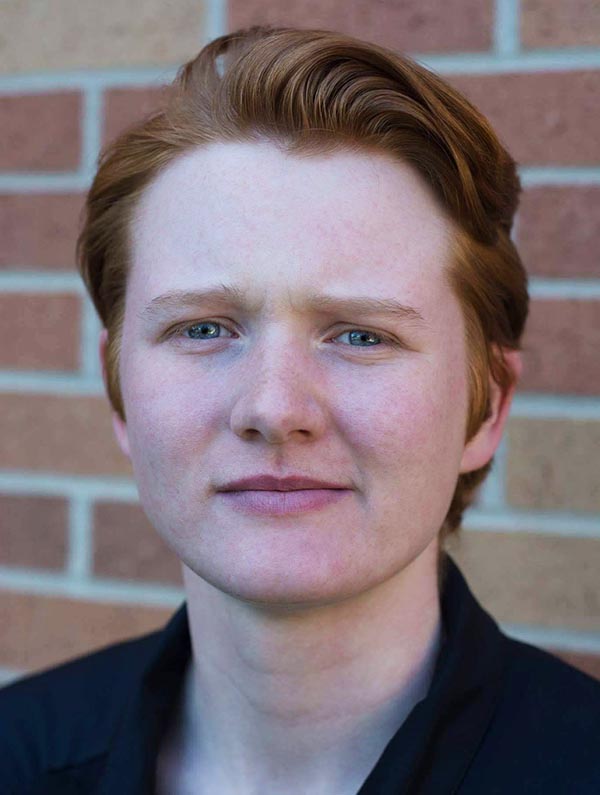 Morgan Corbett-Collings, stage manager of Toys for Noah at the Windsor Walkerville Fringe Festival. Photo by by David Adelaja and courtesy of of Imagine That! Theatre Collective.

Has Toys For Noah been produced and performed anywhere else since University?

No, this will be the show’s debut professional production.

How has the play changed since it was first written as a Character Study?

Absolutely! For Character Study, the play had to be no longer than 20 or so minutes, or else we would have gotten cut-off. This time around, I have a full half hour to play with, and I was able to get back to the writing table and rediscover what I love about this story so much. The play really comes across as a drama/comedy that is meant to take you from the highest of highs to the lowest of lows and have you laughing and crying. There’s so much more to it, and viewers who saw it the first time around will have a completely new experience during this viewing.

In your email you said, the show is “ inspired by the stories and experiences of francophone individuals living in the area in villages such as Pain Court”, are any parts of the show more close to real life stories rather than fiction?

Part of the Character Study process was that we had to interview someone who was relevant to our story, and we could use elements of this interview to inspire us. I had the great pleasure of talking to Madame Rivard, the widow of the late Monsieur Rivard. She had such wonderful stories to tell about their marriage and her husband’s craft. The story of how they came to the province from Québec and the love letters they would write to each other was truly beautiful.

While Toys for Noah really is an original story, I would never have been able to write it without the stories of Mme Rivard, or my memories of growing up in a bilingual household with parents who instilled strong family values into me from the beginning. This play is as much for my family as anyone else. 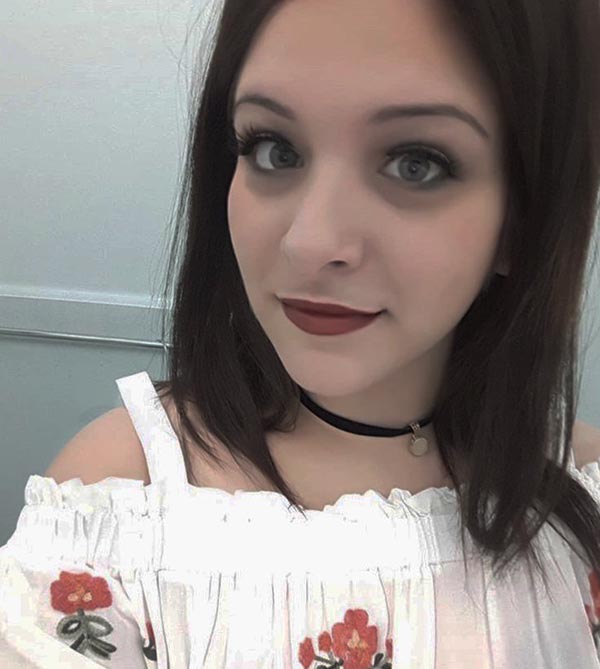 Priscilla Bernauer is a stagehand and the Voice of Blanche in the Windsor Walkerville Fringe Festival production of Toys For Noah. Photo by Priscilla Bernauer and courtesy of of Imagine That! Theatre Collective.

What was the writing process and challenges involved in putting the script and play together?

The challenging part about writing the script was how incredibly personal it was. If you asked my professor, she would tell you that I had one of the most difficult processes out of anyone, so much so that at one point I feared I wasn’t going to get it done. But like a miracle from above, somehow I was able to find the strength within me.

I ask a lot of very real, personal questions in this play. Questions about faith, parenthood, marriage, and there are even some themes of toxic masculinity. I can’t give too much away, but the story definitely has its difficult twists and turns. But it’s important to emphasize that there is also so much joy within the play. The French “joie de vivre” lives within these pages. This is an ode to anyone out there who grew up French, but it’s told in such a way that it can be relatable to anyone. Especially parents. 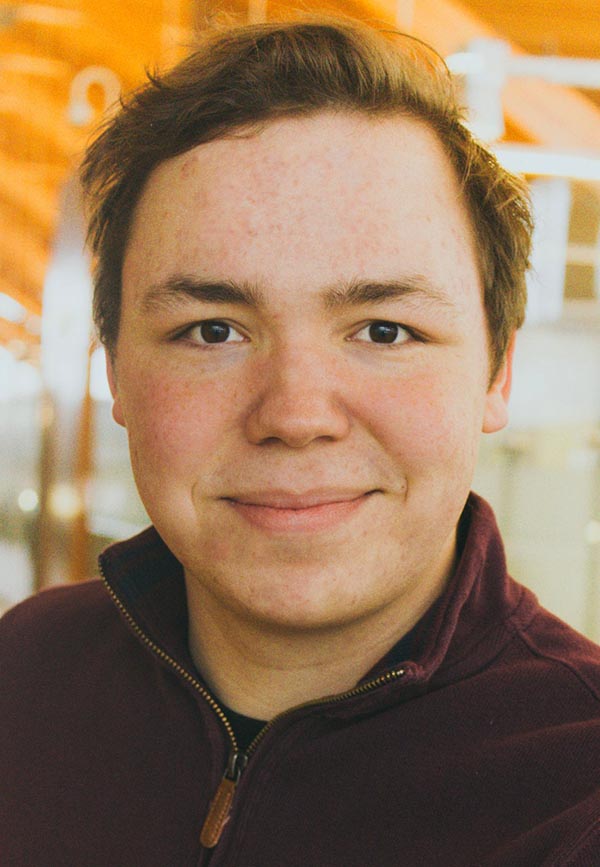 University of Windsor BFA Acting program student Gareth Finnigan will be making his debut as a musician in Toys for Noah at the Windsor Walkerville Fringe Festival. Photo by Alannah Pedde and courtesy of of Imagine That! Theatre Collective.

Is there a musical score to go with the show?

Gareth Finnigan will be playing the role of the musician and playing live music with his acoustic guitar. For those who show up early, they will be greeted to a nice little prologue in which Gareth will be singing songs that relate to the play as a whole. The musician also underscores several moments throughout the play as well. All of the songs are pre-existing and audience members will quickly recognize hits such as Fleetwood Mac’s Landslide and MGMT’s Kids. However, there is also French folk music involved in the show and it makes for quite a fun time. Gareth does a terrific job singing and playing. There’s a little more to his role, but readers will have to come see the show to find out just what that is.

Is this a one man play and if so how many roles will you play?

Without giving away too much, I play Joe Montferrand, the father of Noah in the play. There are other characters mentioned and involved such as Joe’s wife, his parents, and others, but they are not played by me. That’s all I am able to reveal at the moment.

What is Imagine That! Theatre Collective?

Imagine That! Theatre Collective is a small, independent theatre company that presently only consists of myself as the Artistic Director, and then a range of other artists who join from project to project. It started out when I was still in school and we produced a student production of David French’s Leaving Home which I directed. I was also working on projects with other companies that unfortunately fell through. In the future, I hope to both continue developing original work, as well as directing established plays under the Imagine That! umbrella, but I would also like to partner with other companies like Tall Tale Theatre Co. in hopes of bringing high quality theatrical experiences to the public. 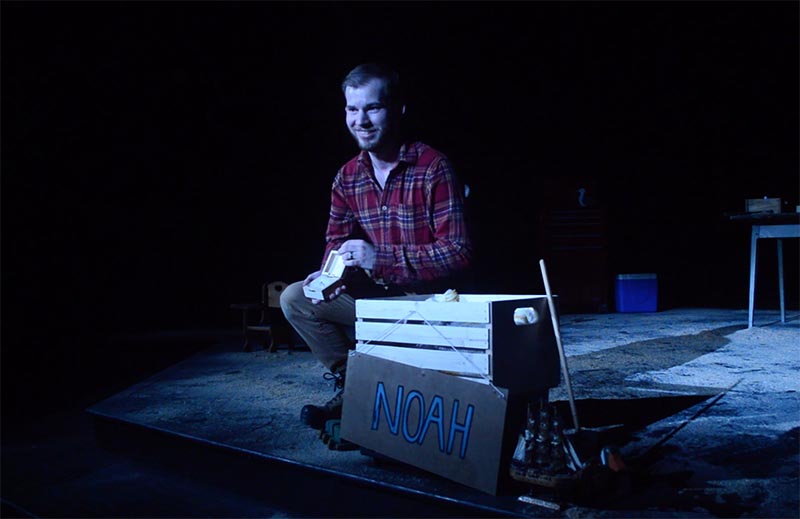 Screenshot of a Toys For Noah promotional video by Hani Yassine. Photo courtesy of of Imagine That! Theatre Collective.

We are currently looking at the possibility of adding a second show to our lineup Friday night, but you’ll have to keep checking our social media pages as well as the Fringe page for confirmation if it does occur.

There are so many diverse acts at this year’s festival. Fringe is a wonderful thing that brings artists of all backgrounds and communities together as one. There is something for everybody to see and enjoy, and I really hope people choose to come out and support local artists. Also be sure to support the businesses that are helping to sponsor this ambitious festival!

PLEASE NOTE: Due to unforeseen circumstances with the planned venue, this production has been cancelled. Please contact Imagine That! Theatre Collective for information on performances being planned for future dates.

For more information about Imagine That! Theatre Collective visit their Facebook page at https://www.facebook.com/imaginethattheatrecollective/