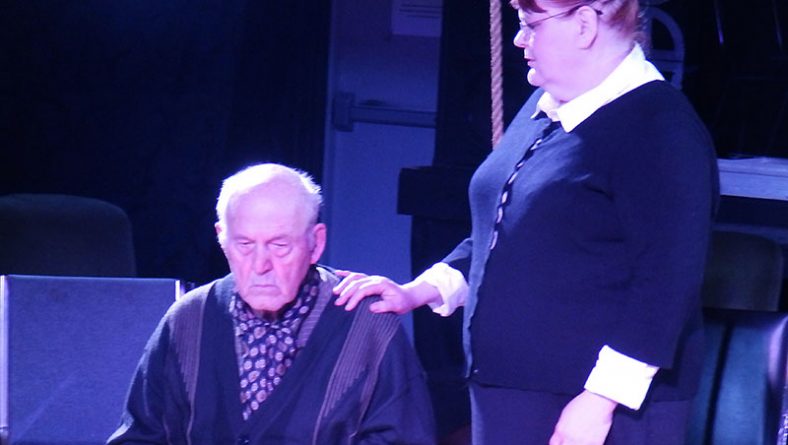 Set in a long-term care home, Windsor’s Korda Artistic Productions takes a startling funny and often engaging look at the love affairs of two characters with mind debilitating Alzheimer’s Disease in “Strangers Among Us.”

(Michele Legere as Joan, comforts her father Michael, played by James Neely during rehearsal for Korda Artistic Productions upcoming show Strangers Among Us on May 22, 2018. Photo above by Robert Tuomi / Eyes On Windsor.)

The ten actor, two-act play will premiere at the company’s Seminole Street KordaZone Theatre on Friday night, May 25.

As to the romances, some are recurring, and with the same people. The paramours are actually married to others but have a habit of forgetting life’s pertinent details. It is a common symptom of their disease. So too is a lack of understanding of their own situations. At one point, Michael, looking for reasons for being in a home, asks: “Where am I, in a holding tank?”

It is a good question and vividly paints a picture of the confusion of dementia on an otherwise highly educated man, a topic, his education at least, he keeps repeating to the audience’s delight. 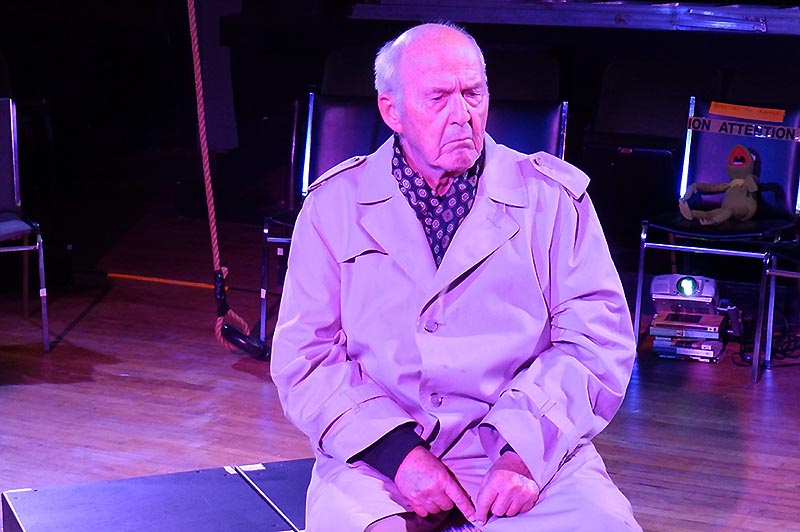 James Neely uses his facial expressions to telegraph the state of his character Michael’s mind during rehearsal of Kordazone’s production of Strangers Among Us on May 22, 2018. Photo by Robert Tuomi / Eyes On Windsor.

In a way, the play is somewhat reminiscent of the romantic comedy “50 First Dates,” a 2004 release.

In the movie, a frustrated Adam Sandler continually courts amnesiac Drew Barrymore. In the case of Strangers, Vancouver playwright Aaron Bushkowsky interweaves highly amusing interactions, played with such alacrity by Korda’s actors, that at times nothing seems amiss.

At other times the darkness of the illness is brought full frontal with the actors showcasing the unexpected true tragedy of an “epidemic wiping out a generation.”

Unlike 50 Dates in which Sandler finds a way to reboot Barrymore’s memory, such a remedy is not the in the cards for those suffering dementia. Very unlike 50 Dates, Strangers is embedded with alternating bouts of light-hearted high school romance followed by scenes of almost shocking hostility for which there seems no apparent reason. Such is the puzzle of Alzheimer’s and the reason many of its sufferers are institutionalized for their own protection.

Co-director Candace Hind, a social worker, is well-acquainted with how quickly patients can change from being confused to being abusive. To her, the play also helps the audience understand a side of ageism. And there is the fact those with Alzheimer’s are largely out of sight and out of mind, most often behind the closed doors of long-term care. She credits Bushkowsky for his effort to open the doors and increase awareness of what is happening on the inside of these buildings. 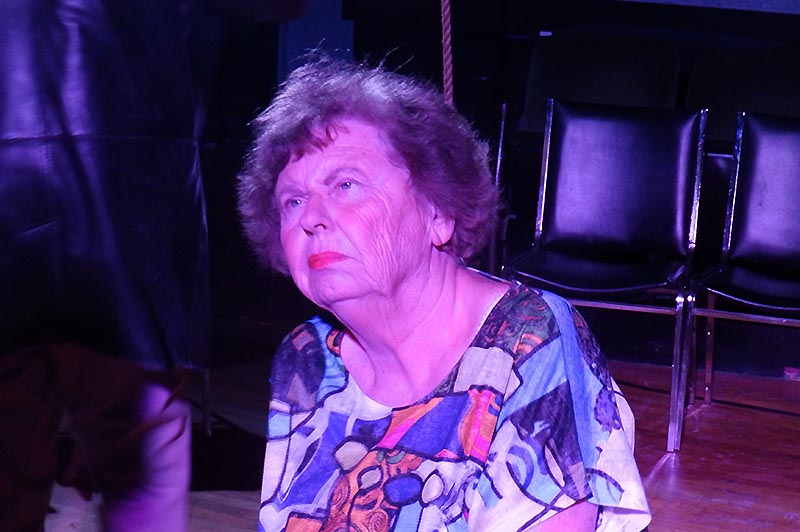 Jane Toppi’s character Gabrielle is a master of conveying confusion about her circumstances during rehearsals for Kordazone Theatre’s Strangers Among Us on May 22, 2018. Photo by Robert Tuomi / Eyes On Windsor.

Lead characters, Gabrielle, known affectionately as Gabby by her family, and Michael are new arrivals to their new home. They strike up a friendship and decide to find an address on a card Gabby is waving about in a way that earns the interest of Michael. Although the next day, after being returned, they both have no idea of what they did or who they did it with. Welcome to Alzheimer’s.

With its theatre-in-the round format, the first time for a production of the play, the audience is front and centre with the starkness of each scene and can easily read the highly effective emotional clues offered by each actor’s expressions.

For the cast, portraying their characters in such close proximity is not an easy feat. It takes considerable talent but Hind and co-director Tracey B. Atin have certainly scored a winner with their selection of believable characters who bring to life all of the nuances of Bushkowsky’s award winning script.

There will also be a first in the region, a performance of the play in an actual long-term care home. On June 9, the actors will travel to the Sun Parlour Centre in Leamington.

Hind also plans to carefully monitor the audience’s reaction. She wants to learn the impact the story has and acknowledges that Korda expects many of its patrons will have some direct relationship with the disease.

For information about performance dates and purchasing tickets please see the Strangers Among Us listing on the Eyes On Windsor events calendar.