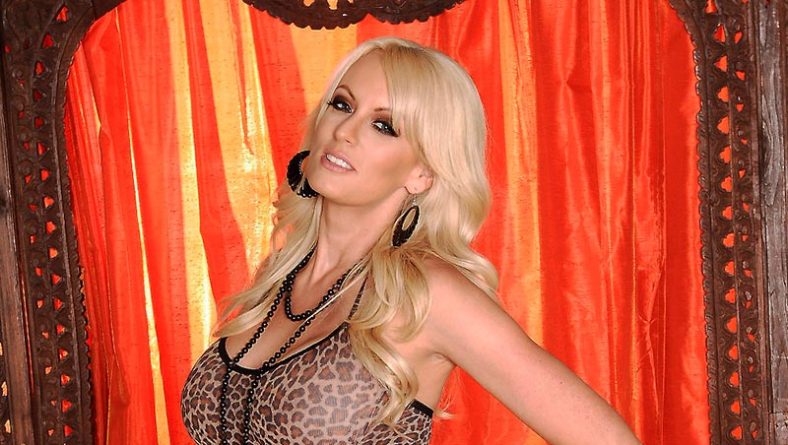 Adult entertainer Stormy Daniels will make an exclusive Canadian appearance in Windsor, Ontario, for what organizers are dubbing, “A Stormy Night In Windsor,” set to take place on June 13, 2018.

(Promotional photo above courtesy of Stormy Daniels and CampusCrawlTours.com)

Daniels, whose real name is Stephanie A. Gregory Clifford, will first speak about topics such as her life, being a mom, being an independent business woman, and standing up to bullying, at Higher Limits Apothecary and Lounge between 7:00 PM and 8:30 PM..

“Who knows what can happen?! We’re overwhelmed to be able to offer the exclusive and first Canadian appearances of Stormy Daniels, especially during this tumultuous political climate,” said Jon Liedtke, co-owner of Higher Limits. “She’s one of the most recognizable figures in politics and we’re excited for this opportunity to hear about the success of a strong woman in business. As she said during her surprise Saturday Night Live debut (May 5, 2018), ‘A storm’s a-comin’!’’

Afterwards, Daniels, who began her career as an exotic dancer, will reveal a lot more when she takes the show to local gentlemen’s club, Cheetahs of Windsor. The show there will run from 9:00 PM to 10:30 PM.

“Cheetah’s Windsor has been an icon in the heart of downtown Windsor for over 25 years and booking Stormy Daniels is another excellent show we’ve helped bring to the city,” said Sam Katzman of Cheetah’s Windsor.

Stormy Daniels has been involved with numerous adult films, winning a long list industry acting, directing, and hall of fame awards since 2004. She has appeared on several television shows, and played roles in Hollywood films “Knocked Up” and the “40 Year Old Virgin.” Daniels even put in a bid to run for the Louisiana U.S. Senate seat back in 2010.

During her Senate bid she focused on issues such as the economy, women in business and child protection. In an interview with Marie Claire Magazine, Daniels revealed she would likely retire from the adult entertainment business if elected. However, she dropped out of the race stating that the political elite and media were not taking her seriously and she could not continue running financially. In a 2010 statement Daniels wrote, “simply because I did not fit in their mold of what an independent working woman should be, the media and political elite have sought to relegate my sense of civic responsibility to mere sideshow antics.”

Recently, Stormy Daniels has made headlines following reports that she allegedly had an affair with U.S. President Donald Trump. The affair began back in 2006, while Trump was married to Melania and just four months after giving birth to their son Barron.

Daniels is currently embroiled in multiple lawsuits against the President of the United States and his attorney for defamation of character and the legality of a 2016 hush agreement in which she was paid $130,000 to keep quiet about the alleged affair with Trump. She’s recently stated she and her attorney are committed to “making sure everyone finds out the truth”, that she is “tired of being threatened” and that she’s “done being bullied” by thugs and other individuals.

Perhaps, Daniels will reveal more about the scandal and her life experiences during her exclusive Canadian engagements in Windsor this June.

“This is the hottest show in the country, so it only made sense to bring it to the city with the busiest border-crossing in North America!” said a spokesperson from CampusCrawlTours.com. “We have been working on this project for months and we are very happy that we could offer our partners this exclusive Canadian booking.”

Tickets for “A Stormy Night In Windsor” are available online through Eventbrite.ca