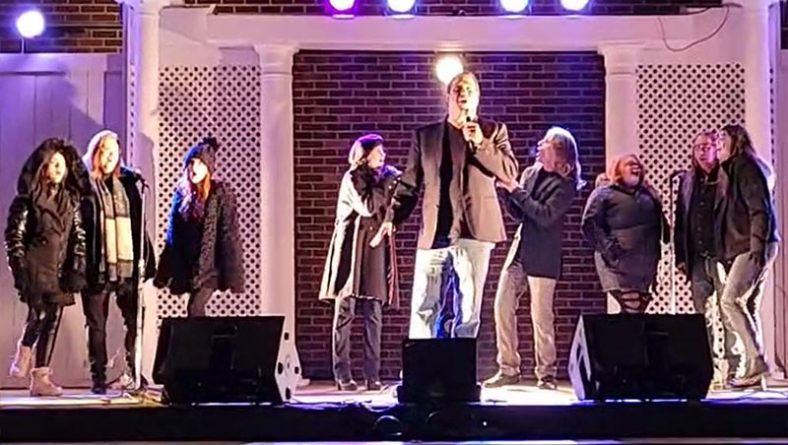 A unique, fast flourishing collaboration of local singers of all ages and experience levels, known as Songbirds, is striving to revitalize the performing arts in Windsor by providing a platform accessible to anyone who can hold a tune even if they’ve never performed before. David Michael, general manager of Rockstar Music Hall and Platinum Room Banquet Hall, says it’s “part of our mentorship program to revitalize the arts, community and culture of our city by providing professional opportunities to learn, grow and actually perform on stage for both veteran and up and coming artists. There is no cost to participate and anyone is welcome to join us.”

Songbirds is both a collaboration of local singers and the name of the show they perform, that currently focuses on singing some of the best known movie soundtracks in history and recent times. According to the Rockstar Platinum website, Songbirds is described as follows:

“SongBirds: DRIVE-IN Concert Attraction featuring a choir of vocalists singing songs from some of the greatest movie soundtracks of all time such as The Greatest Showman, Mulan, A Star is Born, Tangled, Phantom of the Opera, Moulin Rouge, Batman, Wizard of Oz, Catch Me If You Can, and more. This one of a kind musical event features the music of Elton John, Lady Gaga, Christina Aguilera, Hugh Jackman, Mandy Moore, Frank Sinatra, Julie Garland, Andrew Lloyd Webber, and Seal. 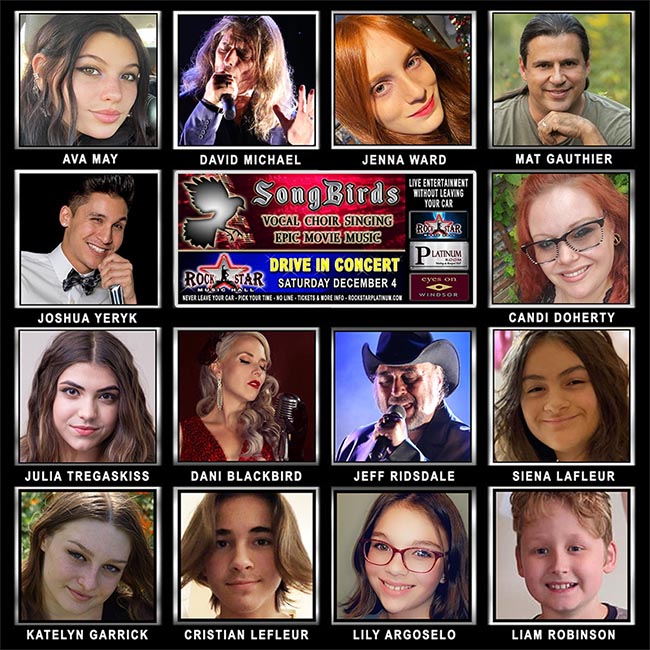 Songbirds started as a three person show in mid October. David Michael, his 14 year old daughter Ava May, and Mat Gauthier, all experienced performers with impressive resumes, set up roadside along Central Ave., outside Rockstar Music Hall, and sang their hearts out together. David says, “we want people to understand our focus at Rockstar Music Hall and Platinum Room is mainly family entertainment and helping artists in our community grow and succeed. We did the first Songbirds show in front of our building because we wanted people that were driving by to see what really goes on at our place and dispel the stereotype that we’re ‘just a bar.’ Many vehicles pulled into our parking lot, stopping to watch.”

Siena started out very quiet at first. David says, “Sienna was very shy and reclusive but the other singers were welcoming, it was a very positive atmosphere, so she opened up and gained a lot of confidence by the time we performed the show. I love seeing professionals mentoring young and upcoming talent, right up to where they all perform on stage.”

Sienna’s brother, Border City Dance Company member, 15 year old Christian Lafleur is an excellent dancer but hasn’t really sung before. He was going to perform in the last show but backed out. After watching his sister perform, he was inspired, and has decided to take part in Songbirds’ third show set for Dec. 4.

Ava is undoubtedly someone that less experienced Songbirds, even those older than her, can learn from and be inspired by. Currently 14 years old, Ava has been performing since she was 8. Both her talented parents, David Michael and Melissa Williams, have impressive accomplishments in the entertainment industry making it no surprise Ava herself has accomplished much in just six short years. “My daughter has done some impressive stuff starting at a very young age,” says David. “She danced at the 2013 International Children’s games, sang the national anthem at the FINA World Championships, Spitfires hockey games, and Windsor Express basketball games, been in a Walmart commercial and a lot more.”

David Michael, a performer in Songbirds and musical director of the show, has an impressive resume. From the mid 80’s to mid 90’s he was a touring musician based out of Los Angeles, served as Prince’s production manager during the last half of the 90’s, worked on productions such as the American Music Awards, and MTV Music Awards. He also operated a commercial media production studio in L.A. working with Hollywood directors, choreographers, and industry professionals. “I used to create all kinds of promotional and demo reels for them,” explained David. “My clients included Madonna, Paula Abdul, Michael Landon, Toni Basil, John Entwistle and Michael Jackson’s directors.”

Ava’s mother, Mellissa Williams, is not only a graduate and instructor at St. Clair College but operates Border City Dance Company based out of Rockstar Music Hall and is highly sought after in the entertainment industry. She is often called upon to provide professional and expert consultation in areas that include casting, production, dance choreography, musical staging, movement consultation, and creative direction. Her professional career spans over 25 years. Her credits include, locally, producing the opening ceremonies for the International Children’s Games, and working with So You Think You Can Dance Canada, internationally she has worked on countless Hollywood films, the American Music Awards, The Oscars, Broadway and with celebrities such as George Michael, Britney Spears and Madonna. Early in her career, Williams was mentored by and danced alongside Prince for four years, eventually acting as his choreographer.

The point is David Michael and Melissa Williams have without doubt been big influences in the nurturing of Ava May’s talents. The best part for members of Songbirds is that Ava, David, and the other experienced members of the group can grow and learn from each other while bringing up the newer less experienced members.

Rounding out the newest members of Songbirds are 12 year old Liam Robinson and the youngest member, 11 year old Lily Argoselo.

David says, “I know Liam’s mom, they are a musical family, she says he is always singing around the house, so we got him to join Songbirds. This is going to be his first gig ever. Our youngest Songbird, Lily, was an elf in last year’s Border City Dance Company Christmas show.”

Border City Dance Company’s next holiday show, Spirit of Christmas featuring Santa Claus and The Dancing Toys, is set to take place on Dec. 19, 21, 22 & 23. This was the debut production of Rockstar Music Hall’s Live Drive Thru outdoor stage attraction which is about to celebrate its first year anniversary. Just when children thought they wouldn’t get to see Santa before Christmas last year due to isolation and the pandemic, the drive-in style live dance theatre holiday experience kept the Christmas spirit alive. Following the next Songbirds show, Lily will return to perform in the upcoming holiday show.

Lily and the new Songbird members will be mentored by the experienced members as they prepare for the group’s third show, with several new additions. They include new Songbirds members Dani Blackbird (Danielle Samson-Lembke) and Joshua Yeryk.

Performing both locally and internationally for many years, Danielle is a vocalist/songwriter with a penchant for vintage jazz and birds. She can usually be found performing classic jazz and lounge music alongside her much beloved jazz ensemble, or occasionally, playing an eclectic selection of tunes solo on her trusty ukulele.

Gaining confidence after building a respectable YouTube following, Joshua auditioned for Canadian Idol and Canada’s Got Talent. Pursuing his passion Josh currently shares his smooth voice by singing popular songs during weddings. In fact, he regularly performs during weddings at Platinum Room. Josh, in partnership with Kristina Foto, operates WindsorWeddings.ca based out of Platinum Room, providing all in one stress free wedding planning and services. David says, “Whether it’s a few people or a few hundred guests, our partnership with Windsor Weddings aims to provide low stress, competitively priced wedding planning. They provide experienced in-house vendors including officiants, musicians, decorators, DJ, a beautiful venue, delicious banquet food and more.”

Original Songbirds member, Mat Gauthuier, along with his wife Lorraine (who performed during the second show), round out the more experienced members. Mat’s long list of entertainment industry credits include musical director for Royal Caribbean Cruise Lines where he received a ship ambassador award, spent over 20 years as a corporate comedian and singing impressionist being recognized as a top entertainer by The Comedy Network, and has won the Rising Star Competition during the World Tribute Artist Competition. He is known for his tribute shows to Billy Joel, Elton John and Elvis. Lorraine is not only a wedding photographer (and one of Platinum Room’s wedding partners) but a talented singer herself. She regularly sings with Mat during commercial events. 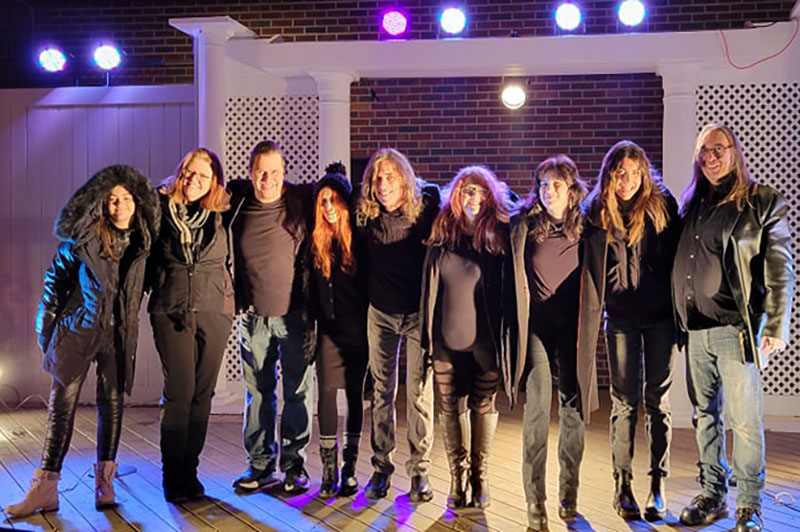 Performers of the Songbirds Choir take a bow following their second show as part of the Drive Thru outdoor concert series in the parking lot of Rockstar Music Hall on Nov. 20, 2021. The group has grown to 15 members and will perform their next show on Dec. 4, 2021.

Regardless of experience, David says, “no matter what level you’re at you’ve got room to wiggle and improve. If you really have a passion for singing and want to be a front person, you can step up the ladder amongst people that have done it and are still doing it.” When it comes to rehearsal most of the learning is done at home online. “I composed all the choir arrangements, sang and recorded them myself, it’s kind of like karaoke style. We upload the video and audio to our website. So everyone learns and practices at home using the media materials, eliminating the need for excessive rehearsal. Last show we only did one group rehearsal. The truth is if you can sing at home with the recording, then you can sing with the choir.”

“We’re hoping to get that kid stuck in the basement with nothing to do, that loves to sing, that can’t do much in the world the way it is these days. It’s a struggle for them to find an opportunity in the arts. Songbirds is an opportunity open to just about anyone who can hold a tune.”

Songbirds has quickly grown from a 3 to 9 to now a 15 member ensemble in a little over one month.

For more information about joining the Songbirds Choir or attending the groups upcoming performance on December 4 please contact Rockstar Music Hall at (519) 945-1189 or visit https://rockstarplatinum.com 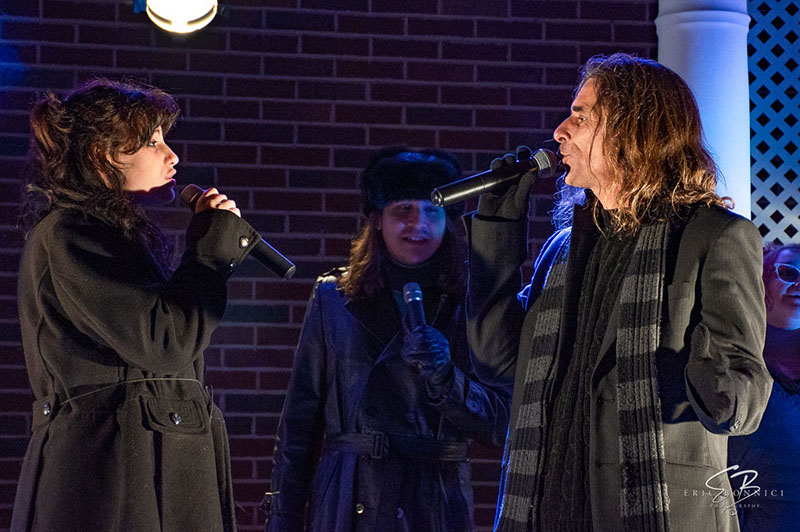