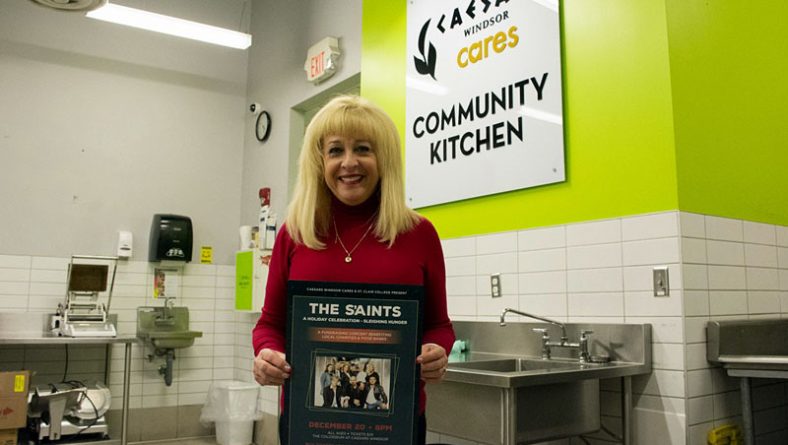 “The S’Aints work super hard to put on a fabulous concert,” says Muir. “They really go all out, when you think about the work that goes into the show. Each and every year it gets better and better.” She loves all the band members with nice things to say about each member at one point saying, “Kelly (Authier / Kay Oh Chay) the piano player is just phenomenal. This year I think it’s going to be real good I’m real excited about it.” 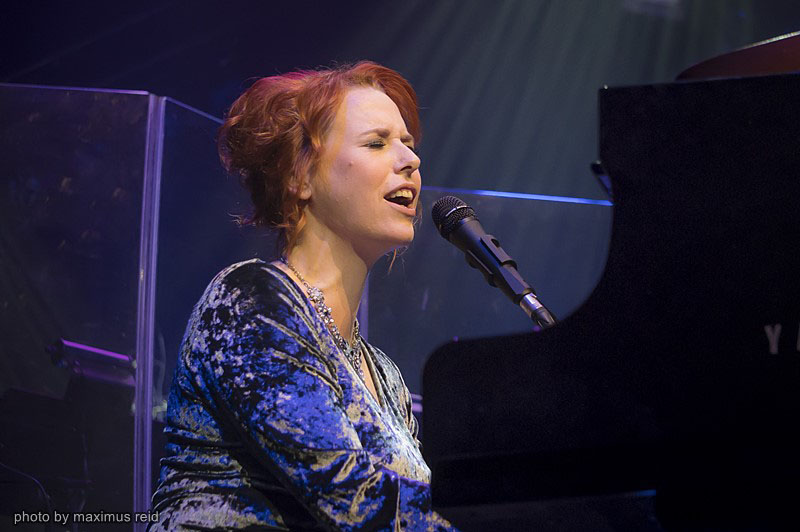 Kelly Authier performing as part of The S’Aints during the annual Sleighing Hunger concert fundraiser inside The Colosseum at Caesars Windsor on Friday, Dec. 21, 2018. Photo by Maximus Reid.

“I love them,” says LeClair. “They are great, one of the absolute best Christmas shows, and one of the best performances that I have ever seen put on by some of the best artists I’ve seen. It’s a fun evening for families to be out there and see what surprises the band might bring. I look forward to the local special guests. It’s really nice that they promote that local talent.” 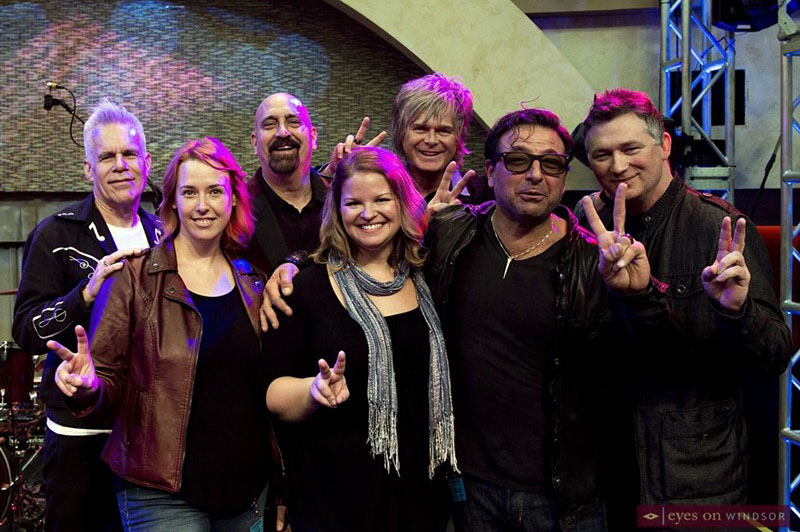 This is the 9th year The S’Aints are holding their annual concert, and the 6th year they’ve partnered with St. Clair College and Caesars Windsor to raise funds to help feed those in need in the community. 100% of ticket sales go to the 15 member Windsor Essex Food Bank Association food banks, and Chatham Outreach For Hunger food bank.Their hard work together has successfully raised over $250,000 since 2013. “That says a lot about the partners that are involved with this,” says Muir.

LeClair says the need has continued to increase in Chatham Kent as well. She says the Chatham Outreach For Hunger food bank gets between 30 and 40 new families (many with young children) registering every month. “I find that disturbing,” she exclaimed. “We’re seeing people who work part time and minimum wage jobs. We’re also seeing a lot of seniors, we’re catering to that generation that stayed home to raise their families particularly senior women, and people also come from all over the place. You never know when a crisis is going to hit a family and they’re going to need support.”

“The need is there and it’s not just because people aren’t working,” said Muir. “They might be working part-time or seasonal. They might be working for minimum wage. So it can be very difficult to make ends meet. They’re people like you or I who have just fallen on tough times. We have a lot of seniors, youth, adults and children and today we have families that actually work and need help mainly once a month because the hydro is expensive, the rent is expensive, so they’re just trying to make ends meet and want a little bit of help.”

“Once you pay your rent and hydro there’s not much left over for food,” explained Muir. “Meat and produce are extremely expensive so those are the items people don’t buy.”

A big increase has been noted among seniors (15%), those receiving social assistance (2%), and youth under 18 years old (6%), according to the latest WEFBA stats. Muir also shared a shocking statistic about children; “Our stats say 1 in 4 children live in poverty in Windsor. Most of it is in our west end of town.” This is the highest rate in all of Canada!

Typical food bank donations of non-perishable food items are not the most nutritious, especially for children who need them most. Unfortunately, food banks don’t have funds to purchase healthier food items either. “We don’t purchase anything unless we get a huge donation because we just don’t have the money,” said Muir.

The Sleighing Hunger concert has been helping to get these food banks the money they need to buy nutritious food items. “This concert is awesome, we are fortunate to be a part of it,” said Muir. “It’s events like this concert that we really count on to help us continue meeting that need,” explained LeClair. 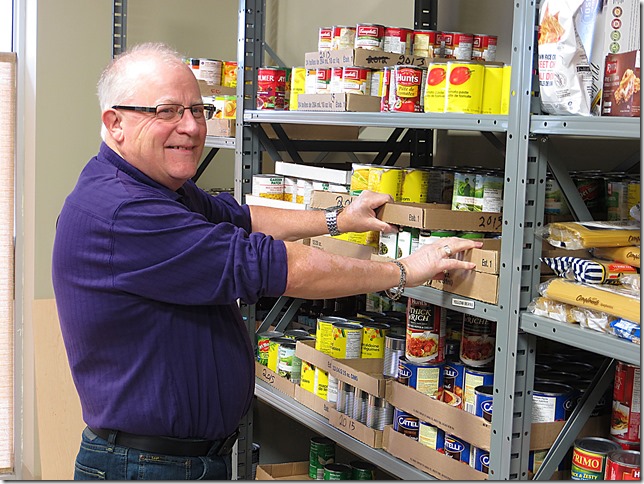 In Chatham, “we use the money to buy a number of food items which you don’t normally get in food drives. So perishables; Fresh produce, milk, eggs, cheese, fresh meat, fresh vegetables, those kind of nutritious items so the family can add them to the diet they are serving.”

The Unemployed Help Centre in Windsor, where Muir is the CEO, has a grocery store model for their food bank. “People can come shop with dignity and get some food items that are very costly through a donation like through the Sleighing Hunger concert,” explains Muir. “We’ve got meat, milk, eggs, yogurt, it’s nutritious. They shop just like in a grocery store.”

Muir mentioned several times during our interview that funds raised from The S’Aints concert last year was used to buy hamburger (ground beef).

“We bought hamburger which is something we don’t get donated. Each and every month we are able to separate that donation out and give hamburger to families. And when you’re getting a meat product that truly means a lot to families. When they get to the fridge and see hamburger you can definitely see the smiles on their faces.”

The food bank received just over $50,000 last year from funds raised through the concert. That’s a lot of hamburger! “Without that donation we wouldn’t be able to do that,” said Muir said.

Funds raised also help during the holidays. “I think most of us sit down and enjoy a Christmas dinner,” she said. “I want to know at Christmas time others have what everyone has. So that’s what this is all about as well.”

On a side note: The Caesars Windsor Cares Community Kitchen inside the Unemployed Help Centre (one of several programs in addition to their food bank) recently began the first ever Farm To Food Program in Canada. The program is making healthy nutritious soup from rescued produce that would have ended up in the garbage. Chef Anthony Dalupan told us a little about the program. 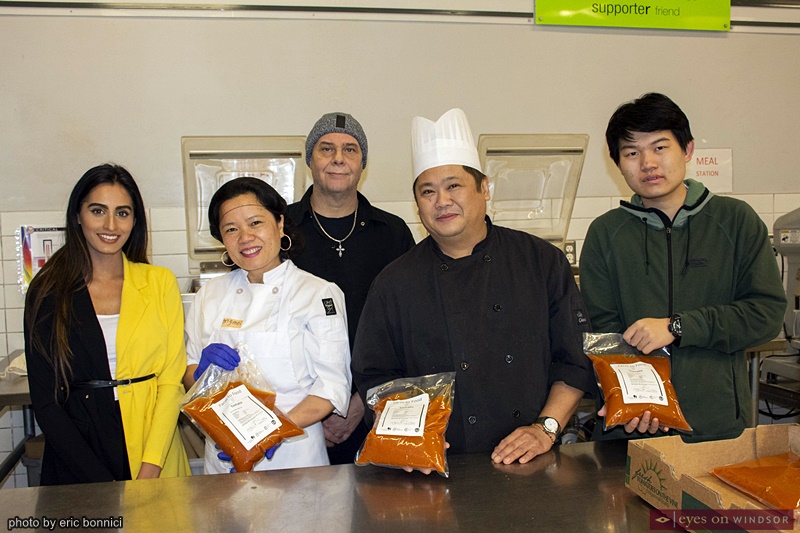 “We make about 1200 litres of soup a day. It goes to Food Ontario and gets distributed to food banks across Ontario. Plus we supply the food banks around here. We average about 150 bags a day. It’s vacuum sealed and frozen in 1.5 Litre bags and it’s good for a family of four. They just have to heat it up. All the vegetables we get are rescued (from local farmers, greenhouses and food processors).”

Kitchen volunteers and donations are always appreciated, especially spices to help give the soup added flavour.

Clearly, programs like the UHC’s Farm To Food Program and fundraising through events like The S’Aints Sleighing Hunger concert are helping to get more nutritious food items into food banks.

The S’Aints will perform their all ages show featuring traditional holiday tunes, including those from their current release “Strike Hunger” and from previous albums on The Colosseum stage inside Caesars Windsor on Fri. Dec. 20, 2019. Their latest album will be available for sale at the show, and is currently available online at sleighinghunger.com, St. Clair College campuses and throughout Windsor and Essex County locations for $10 each.

Tickets to the concert are $25 each and available at the Caesars Windsor Box Office, St. Clair College campuses, Devonshire Mall Guest Services and ticketmaster.ca.

For more information about Chatham Outreach For Hunger visit https://outreachforhunger.com

For more information about the Unemployed Help Centre visit https://www.uhc.ca 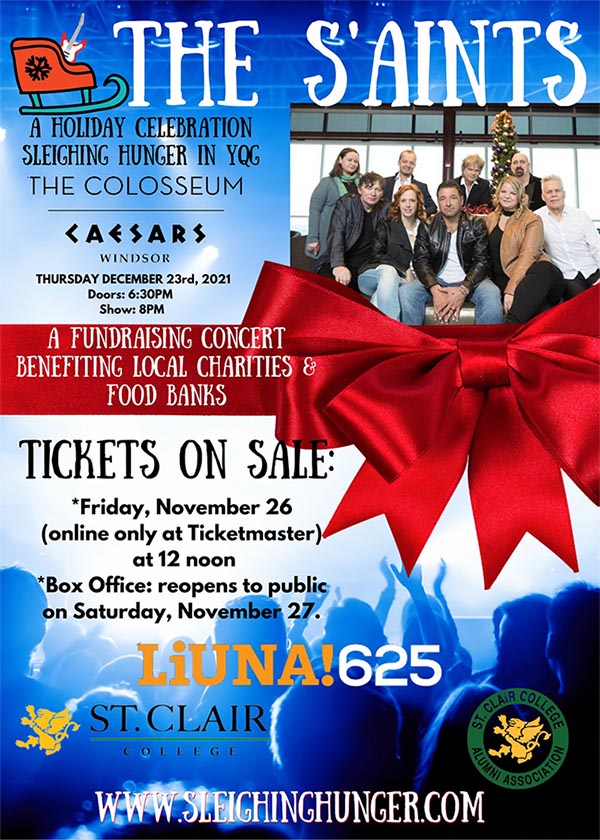