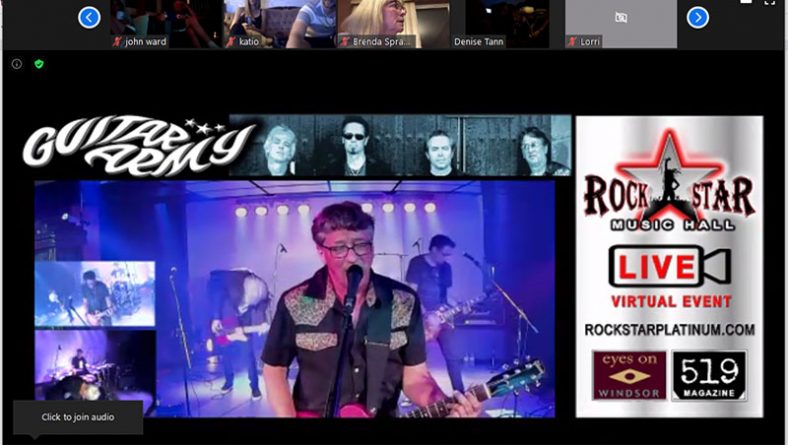 Music fans were thrilled to finally attend a live concert last night thanks to the “Rockstar Music Hall Virtual Stage Experience”. Rockstar’s groundbreaking use of virtual reality technology, innovatively and safely connects audiences stage side with artists performing live right in front of them. The audience can not only see and hear the artists but the artists can see and hear them too for an interactive night of entertainment.

Local singer-songwriter and performer Dale D’Amore said, “It’s different, I could see people’s faces and their reactions to the songs, it was pretty cool.” Last night, July 10, his band Guitar Army was the first to headline a concert on the Rockstar Music Hall Virtual Stage. Rick Labonte and his band The Formula opened the night. Both performed their own original music. “The show turned out good, I was pleasantly surprised,” D’Amore said. “We had a blast, It felt good to be on stage with my buddies after such a long time apart,” exclaimed Labonte.

“The idea is to create a virtual platform, that way we can get some people back to work and obviously we’re trying to do something different,” explained Rockstar Music Hall General Manager, David Michael. “Instead of the entertainers looking into the crowd there’s a huge bank of televisions, and if you could imagine, all these people in little boxes on the screens, that’s what the crowd is. The crowd is tied into the sound system and the band is able to hear them and feed off of them when they clap or cheer. They’ll be able to talk to them in real time.”

Last night D’Amore, obviously having fun, pointed to the virtual audience saying, “”Carlo I know you like this one,” as the band began to play “Love Gone Bad.” Labonte talked to the audience about one of his new songs, “Matter of Time”, which he said was inspired by the movie The Perfect Storm. During and in between songs the audience was having fun as well. They could be seen and heard clapping and cheering.

Labonte opened the show performing a set of original songs with backing from his band The Formula made up of Wayne Bracewell, Kevin Gagnon, and Jim Kickham. Labonte told the audience he was playing originals from his last album and new ones to be released soon. His first album, “On A Mission”, came out in 2016. The album featured dozens of local musicians performing the songs with him including his own band The Formula, Jeff Burrows (The Tea Party), Dale D’amore (Guitar Army), Michael Hereford (British Beat 66), Nino Maniaci (The Source) and many more great musicians. Labonte says his next album will most likely be called “Living It Up,” and like the last one will include The Formula and more of his music pals on the songs. Two of the names he dropped were once again Jeff Burrows and Luc Michaud.

Labonte thanked the organizers for, as he put it, “keeping everything on the up and up and making us feel so comfortable.” Rockstar Music Hall is taking precautions to keep their staff and performers safe during the pandemic. Labonte even pointed out that Rockstar didn’t even allow Guitar Army into the venue yet because The Formula was still in there. Before closing out their set with “On The Edge” the band performed “Damaged Good”, a song which seemed to be a virtual audience favourite judging by their applause. The song is about someone who has been through past relationship heartache and being cheated on and not being sure if they are ready to move forward with a new relationship. Labonte will be releasing new music and his second album very soon. 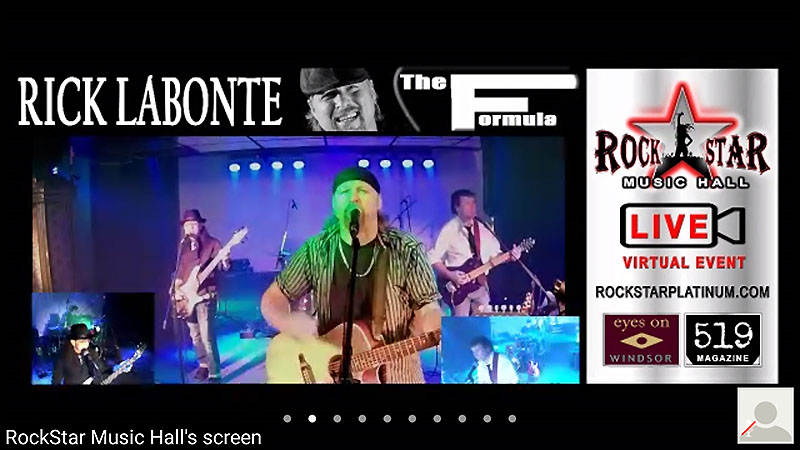 Guitar Army is making a little bit of history lately. The band, made up of Dale D’Amore, Tim Garant, Mike Fortier, and Dave Garant, is the first to headline a Rockstar Music Hall Virtual Stage Experience concert, and they were the last to perform at Caesars Windsor before it closed down because of the pandemic. “We were the last ones to play at Cosmos, March 14,” explained D’Amore. “So we go down in history as the last band to play at Cosmos.” The Virtual Stage was the first time the band has performed together since Cosmos.

By the end of the set the audience cheered and called for an encore, D’Amore said he was surprised by this and honoured that Guitar Army has bragging rights to performing Windsor’s, “first virtual reality concert encore.” Being unprepared for this the band played the only cover song of the night featuring American proto-punk band MC5’s 1969 track “Kick Out The Jams.”

Before that the band played three songs, “Welcome To The Cruel World”, “Underground” and “Better Off Dead”. “These three songs are special to me,” D’Amore told the audience. In a post show interview (over the Internet) he told Eyes On Windsor those were the first three songs he ever wrote. “I was playing in a band called The Spys back in 1979, they go back a long way. “Underground” was actually out on a 45” vinyl record. To this day you can buy it on eBay for $400 and I gave them all away. Who would have known back 40 years ago?”

D’Amore has written some new solo music and explains, “just before COVID I was supposed to have an album come out at the end of May but I postponed it all. I have one song on there called “Last One Standing” and it’s eerie because it’s almost about what’s going on right now in the world. I haven’t put it out for that reason because I feel uncomfortable. But I’ll probably put the single out by the end of the summer. Even though I wrote it three years ago.That song almost depicts everything that’s going on in the world today.”

Ultimately, judged by their reaction, the audience and bands enjoyed interacting with one another through the Rockstar Music Hall Virtual Stage Experience.

The quality of the stream was impressive considering it is done over the Internet. There were a couple of very small glitches. As a virtual audience member, Eyes On Windsor, noticed the video jumped or stalled for less than a second about three times. Otherwise the video quality was excellent. The sound was also very clear when the band played their songs. However, sometimes in between songs there was feedback and distorted sounds, most likely from a lot of people cheering and clapping at the same time. D’amore said, “it’s going to take some time for David (Rockstar) to tweek it a bit, they’re doing a good job, and they’ll eventually perfect it.” Another enjoyable part of the show included the video cutting over to the screens where the audience members could be seen.

The interface was quite simple and easy to figure out and in part utilized the ZOOM Virtual Meeting platform. Buttons were available to mute the users microphone and or video camera, and they could swipe to see other members of the audience. “As people are performing, whether it’s a concert or a comedy show, we cut away to the audience, kind of like they would do at an award show,” explains David Michael.

Overall, the Rockstar Music Hall Virtual Stage is well worth the small admission fee. Last night’s concert was $10 with funds supporting the venue and performers during these difficult times. In addition to the admission, downloading the ZOOM app to your computer or mobile devices is required.

Most of the shows will be archived online on the Rockstar Music Hall Youtube channel. This could help artists to expand their reach and attract new fans. “This is a great way for entertainers to get more viewers as the Rockstar Music Hall Virtual Stage gains a following, opposed to streaming independently on their own,” says David Michael. “And not to mention it’s a high quantity stream.”

Upcoming entertainment will be diverse not only featuring concerts. “It’s creating a virtual fourth wall, explains David Michael. “I’ve been talking with drag performers, comedians, motivational speakers and everybody. I’m even talking with people about doing a sitcom type show. We’re going to branch out into different things. This is an opportunity to be creative and different, that’s what we’re striving for here. We’re also striving for a solution that will work in this pandemic environment and that will help people, and it’s not just limited to entertainment, we’re working on setting up virtual workshops, seminars, motivational speakers, instruction, there’s a lot of avenues open to us.”

Tonight (July 11) Rockstar Music Hall will feature the next generation of music entertainment from our community while testing the capacity of their virtual audience (up to 500). For this reason they’re celebrating by making admission free. The lineup includes Leave Those Kids Alone , Madelyn Stein , Ava May, Michael and Ryley Dubek featuring students of The Canadian Conservatory of Music. Doors open at 7:30pm and the show starts at 8:00pm. Watch the show on ZOOM by clicking the image below. 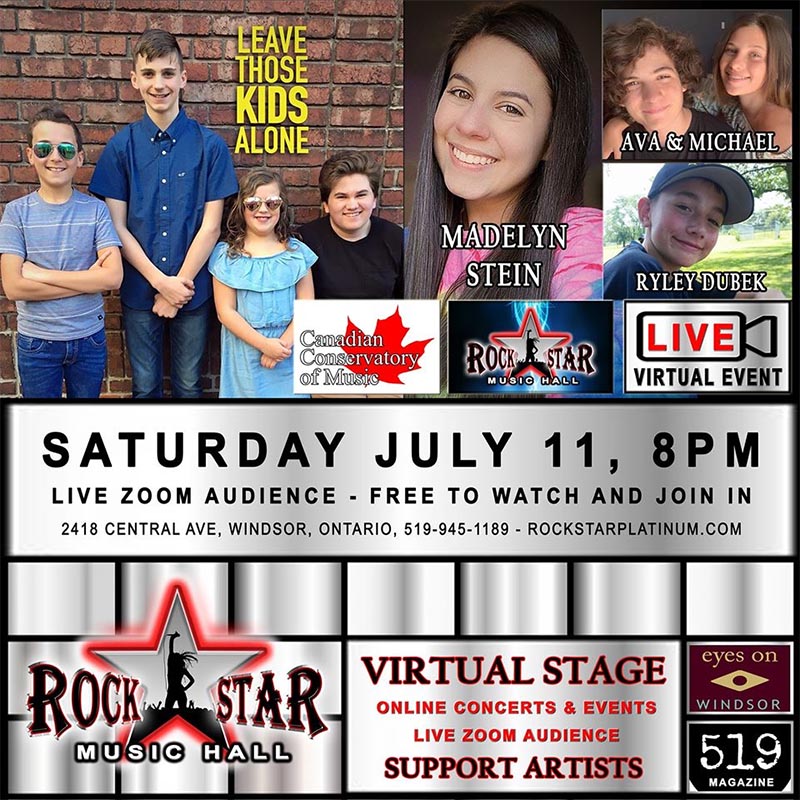