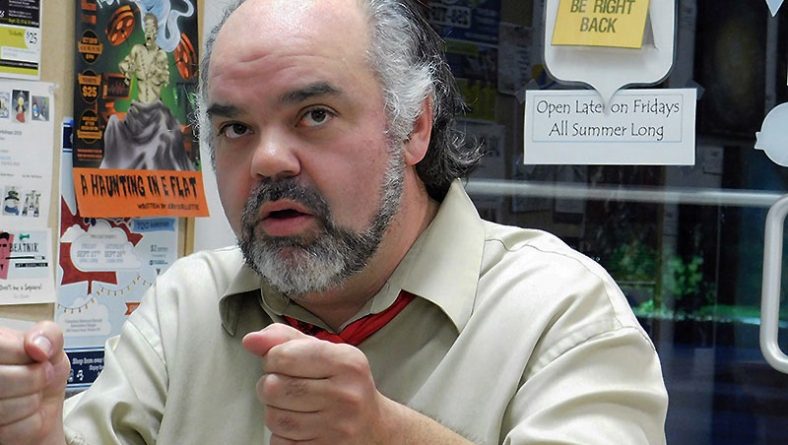 After the triumphant return, last month, of live theatre to Windsor, Meteor Bar is bringing back Rob Tymec’s one-man show A Hero’s Journey Through Plot Inconsistencies for some extra performances. The popular downtown bar appears to be turning into something of an informal theatre space. “The technical term is actually a Found Space.” actor/writer Rob Tymec elaborates, “Basically, it’s a building that was never meant to be a theatre suddenly being used as a location for performance art. These are actually my favorite spots to put on plays!”

He’s not lying, either. When asked where else he’s used Found Spaces, the list of odd locations is quite extensive. Tymec has put on plays in various small art galleries, bars, cafes. restaurants and even a barn! He feels that a play becomes “more magical” when an audience watches it in a place that is not meant to be used for such a purpose.

Ian Phillips, co-owner of Meteor, feels much the same way. Which is why they want to bring in the show for another run. “There was a very interesting vibe going on as the show was being performed.” he recalls as he watched it all from behind the bar, “I just thought to myself: This kind of entertainment really works here. I really did feel that we needed to do more of it.”

“Live theatre is the sort of thing I want to see going on in my bar.” he continues, “There’s plenty of places downtown that are already doing all the usual stuff. Live music and the occasional karaoke night. Maybe even a stand-up comedy night here and there. I may do some of that stuff too but I also want to be recognized as a bar that stands out from the rest of the Downtown Scene by hosting more unusual stuff.”

Tymec’s one-man show certainly is unusual. Aside from the oddness of watching a single person acting out an entire story all by himself, the actual plot of the play is quite bizarre.

“As a rule, people don’t try to perform a science fiction adventure in a live format.” Tymec admits, “Sci fi requires special effects and flashy visuals. Not something you can really create when you’re just one guy in front of an audience. So that’s why there’s a big emphasis on comedy, too. I try to have fun with the limitations being imposed upon me.”

Such fun involves all sorts of shenanigans. Amongst other things, Tymec will sing like an Ewok, re-create the title sequence of Star Trek by turning himself into the Enterprise and even do some light acrobatics as he dances with a double-ended lightsaber. All while doing what geeks do best: nitpicking.

“This is the real crux of the story.” the playwright/performer claims, “I create a sort of silly storyline that allows my protagonist to journey through various popular sci fi franchises and point out the errors in their creation. Small things like how Jawas and Sand People would probably not co-exist in an isolated eco-system like a desert. Or really big stuff like how Doctor Who has two contradictory origin stories for the Loch Ness Monster! Geeks love to point this stuff out. Creating a show that does this was right up their alley!”

Tymec is quick to point out, of course, that non-geeks will have fun with this too. The plot is broad enough that everyone can appreciate it. Now it’s just a matter of figuring out what night works for people to appreciate it on!

“We tried a Saturday night performance last month.” co-owner Ian Phillips points out, “Which went nicely. But we want to see if there’s a night that might work better. So now we’re trying Thursday and Friday night performances. Once we figure out where a Theatre Night works best, we can really start to capitolise on it.”

Does this mean live theatre will become a regular staple at Meteor Bar?

“It certainly seems like a distinct possibility.” Phillips answers, “We’re playing things by ear, right now, and seeing where it goes.”

“Baby steps!” Tymec affirms, “But I do really like the space and see a lot of potential for it. Meteor could become this really cool spot Downtown to enjoy unusual plays. I’d love to see that happen.”

If you’d like to see that happen too, come check out the show! Theteor at Meteor Presents: A Hero’s Journey Through Plot Inconsistencies, a one-man show about what geeks do best: Nitpicking, at Meteor Bar (138 University Ave. W. (upstairs) on Oct. 8 & 9 at 8pm. Admission is pass the hat (pay what you can). 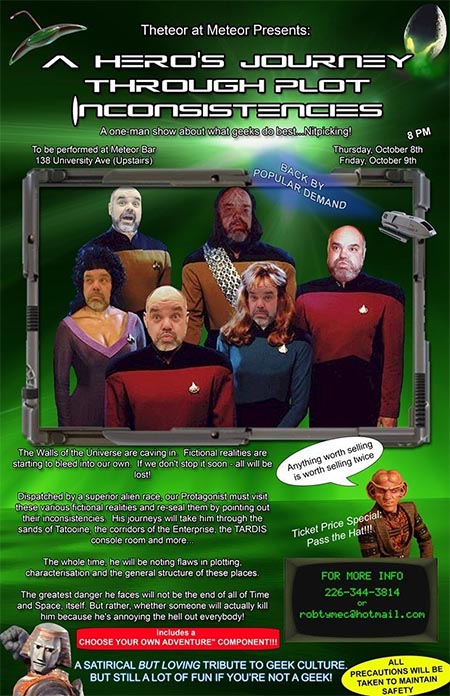