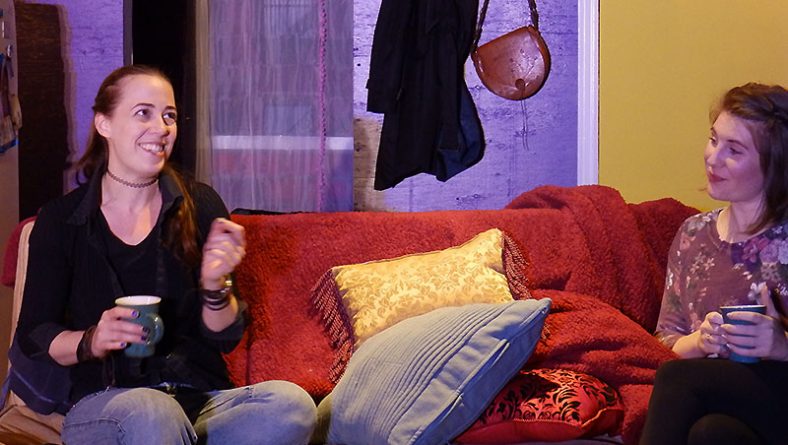 When Post Production Theatre Company’s co-founder Michael O’Reilly randomly discovered Diana Son’s play “Stop Kiss” in a Berkeley, California bookstore, he had to read the whole thing, right there and then. He knew he had found a play able to take its audience’s emotions on a Tilt-a-Whirl ride, always moving rapidly but moving back, almost calmly, before the next rush.

In its local run at the ShadowBox Theatre, Stop Kiss has its dual protagonists roll through the ups and downs of a budding romance. All of this on the right side of the stage in a rather intelligent comedic romp between two women finding themselves in love. But this is only half of a story which plays out, not sequentially, on both sides of the stage.

Producer Michael Potter knew the chemistry between its co-lead actors, Fay Lynn as Callie and her love interest Sara, played by Lauren Crowley, had to be evident and highly believable. From the moment the two auditioned, he knew he had exactly the alchemy needed.

While both actors meticulously bring life to the pages of Son’s script, which is followed religiously, it is almost excruciating to watch the differences between the stage’s left and right divisions. 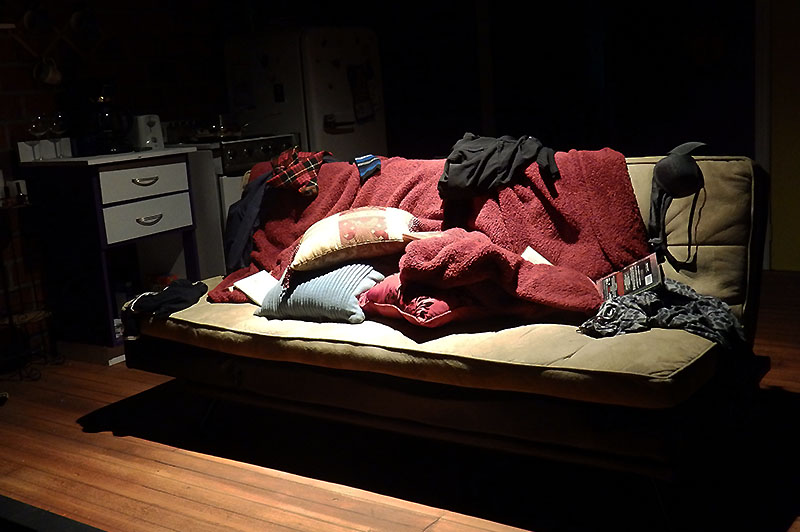 Most of the action on the left side of the stage revolves around Callie’s rather messy couch in Post Productions production of Stop Kiss. Photo by Robert Tuomi / Eyes On Windsor.

The set with its two opposites was hand -crafted by set director Matthew Burgess to create just the right ambiance to authenticate the on stage lightness and heaviness.

Although the theatre is intimate in its own right, Burgess relied mostly on props to produce the lighting needed which, says Potter, gives a feeling of being right on stage with the actors.

Burgess put together an institutional looking right side of the stage to bleakly bring to focus the tragedy of the story. There, in a police interrogation and alternatively a hospital room, the results of a gay bashing unfold and it’s not pleasant.

Lynn’s character magically and effortlessly moves between the two sides of the stage. Switching her demeanour to meet each side’s demands is no easy feat. At first introduction she presents a happy-go-lucky – her apartment is a mess – helicopter riding traffic reporter, who admits to not really being a real reporter at all, at least in her mind.

Contrast this to her emotional collapse after “the” incident. There in the police interrogation room she profoundly articulates the sadness of a distraught lover totally bereft of her character’s high-strung happiness on the other side of the stage. 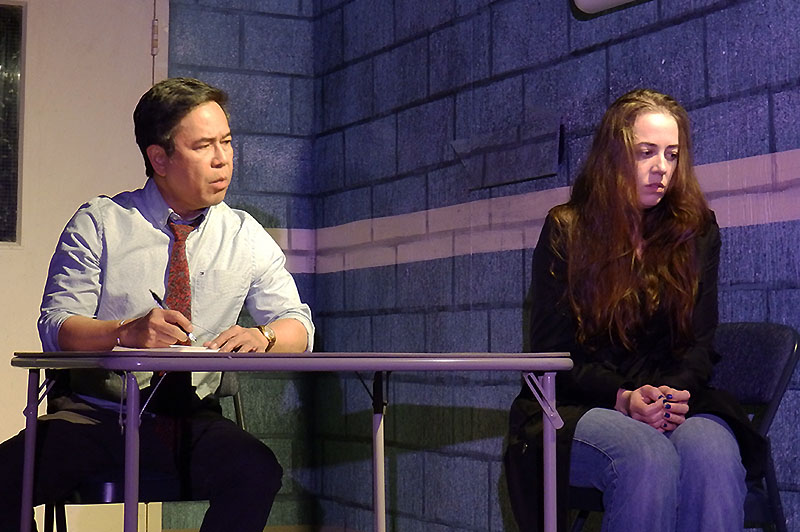 Although a comedy/tragedy, Son has added considerable but subtle pathos which unites both sides of the stage in ways able to tear at the audience’s heart strings. Although the play is set in 2002 New York, its dialogue can be remarkably contemporary. In one example, when Sara and Callie discuss what they do, Callie characterizes her job as, “just messing things up.”

Giuliani, the Mayor of New York during the play’s timeline, is now, say some, messing up his work on the Stormy Daniels file as US President Donald Trump’s attorney. Possibly a good example of art imitating life.

Founded in 2016 by Potter and O’Reilly, Stop Kiss is Post’s fifth and largest production to date. It is expected to be eclipsed by a currently being written Christmas song and dance special with double the actors.

Stop Kiss also features 93.9 The River’s Dan MacDonald as George, Matt Froese as Peter, Cindy Pastorius as Mrs. Winsley and as a nurse and Alex Alejandria as Detective Cole. 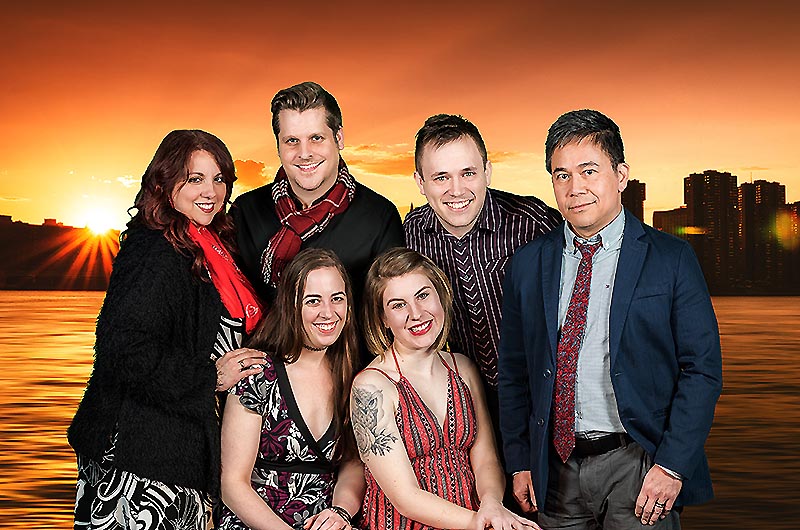 The romance, comedy and drama of Stop Kiss will be accentuated by the music of Flower Face – the solo music project of 20 year old Windsor native Ruby Mckinnon. “For Stop Kiss we wanted something delicate that could convey the unwritten nature of our lives,” explains co-director Michael O’Reilly. “Local artist Flower Face came to mind instantly. Her songs reveal disappointment and possibility as companions, and life as a joyous struggle – exactly what is needed for a romantic tragi-comedy.” 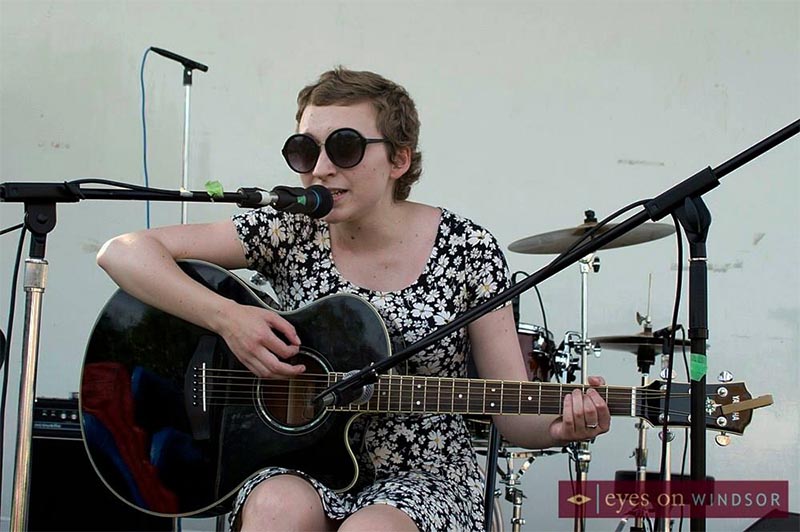 Stop Kiss is directed by Michael O’Reilly and Michael K. Potter and produced by Potter, O’Reilly and Fay Lynn of Post Productions. Stage managers are Sadie Alejandria and Julia Pastorius. Set design is by Matthew Burgess with construction by Burgess and Rob Burgess.

More information is available on the Eyes On Windsor Events Calendar listing for Stop Kiss.