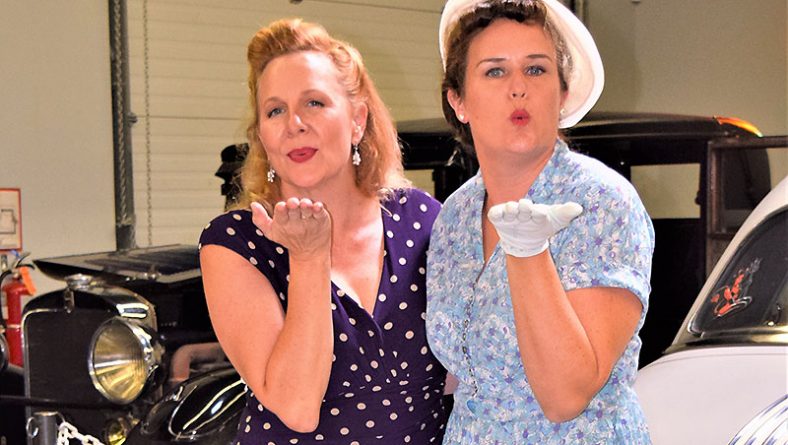 The Bank Theatre is set to once again feature episodes of the hit radio sitcom “My Friend Irma” with two brand NEW, hilarious chapters “Thanksgiving Turkey” and “The Redhead.” The production runs at The Bank Theatre from Friday, October 22 through to Sunday, October 24 with both evening and matinee shows. Tickets must be purchased in advance and are available online only.

My Friend Irma, premiered on CBS radio from 1947 – 1953. Created by Cy Howard, the radio show was so popular in the late 1940s that its success escalated into films, television, a comic strip, and a comic book. “My Friend Irma” tells the story of an extremely dim-witted blonde stenographer named Irma Peterson, played by Jennifer Blom, and the daily high-jinx that she gets into with her screwy friends. One of Irma’s best friends was her logical and very dependable roommate, and narrator of the show, Jane Stacy, played by Allison Still. Irma was so dumb that she believed that flypaper was airline stationery paper!

The first episodes of “My Friend Irma” received wonderful reviews including a review from patrons Richard and Dorothy Poisson who said “Allison Still did a super job of acting and also directing an exceptionally talented cast, including ‘on stage’ music and sound effects. You will enjoy a talented cast, along with light-hearted and humorous entertainment, which is just what we need now.”

“I am very excited to have another two episodes of “My Friend Irma” on our stage, after such rave reviews of the first two episodes in September,” said President Corey Robertson. “This witty and charming radio play will delight and entertain theatre goers of all ages. The Bank Theatre is committed to staging quality performances in our community, while strictly adhering to protocols mandated by local and provincial guidelines in the reopening of Ontario.”

Advance tickets are available online only at $20 per person. The Bank Theatre is located at 10 Erie St. S., Leamington Ontario. Ontario Covid-19 regulations apply. Full details including dates, times, and safety protocols are available at banktheatre.com

Event Listing: My Friend Irma Presented by The Bank Theatre in Leamington 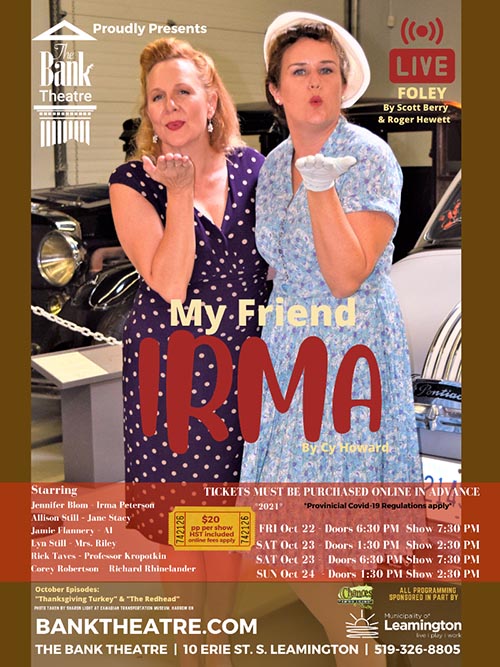