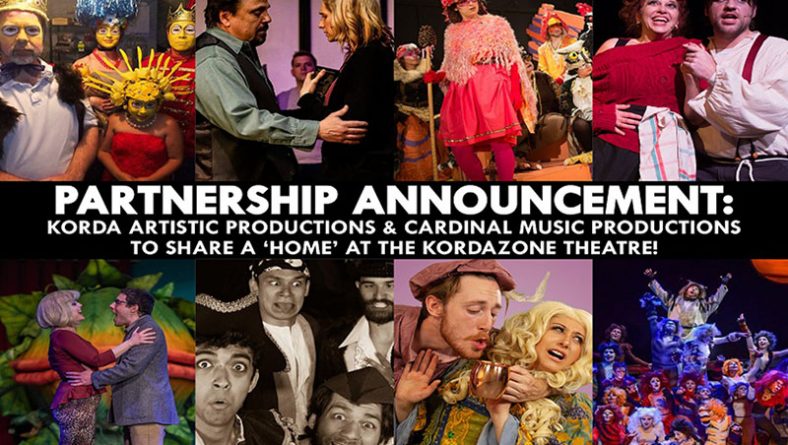 Both Groups Unveil Exciting Plans for 2022

Korda Artistic Productions and Cardinal Music Productions are thrilled to announce an exciting new partnership between the two longstanding local theatre companies. Beginning immediately, the performing arts groups have entered into a partnership agreement to share The KordaZone Theatre venue located at 2520 Seminole Street in Windsor, Ontario – with both calling the theatre ‘home’.

The move comes as the performing arts sector continues to navigate the devastating impacts of the ongoing COVID-19 global pandemic, and presents an opportunity for the two groups to share resources and expenses, while providing an exciting, innovative, stable and safe environment for local performers, crew members, and audiences to engage with the performing arts.

“Partnership is the name of the game now,” says Korda Founder, Tracey Atin. “At Korda, we have always tried to find new and interesting ways to expand our family and support ourselves and others through the work we do. We’ve produced Shakespeare in a vineyard, shared production profits with community organizations supporting vulnerable populations, offered co-op placements, presented Pay-What-You-Can nights to make theatre more accessible to new audiences, supported productions by other groups, and more. KordaZone is our playhouse, and a ‘home’ to many of us. The hard work and commitment of our board members, players, artists and audiences over the years have helped build a welcoming, quirky place where we can explore, play, and create together. Over the years, Joe and Cardinal Music Productions have become a large part of our story. We are excited to open the doors to welcome the Cardinal family back to The KordaZone Theatre, and look forward to sharing our home as we all continue finding our way through these strange and scary times. This is about sharing space, yes, but it is also about sharing resources and risks, successes and challenges. We’ve realized how much we have in common, and as we begin to emerge from this pandemic (fingers crossed!), we look forward to entertaining our loyal audiences once again, and offering them even more magic under one roof.” 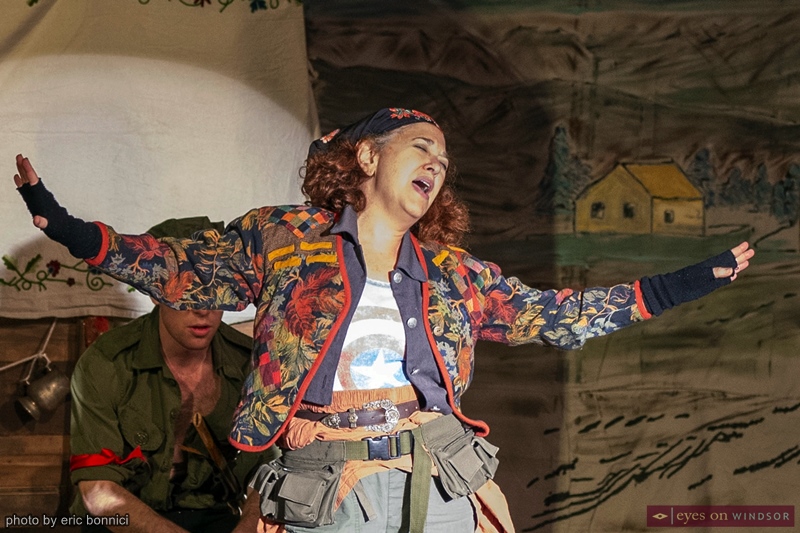 Tracey B. Atin as Mother Courage performing in Korda Artistic Productions presentation of Mother Courage and Her Children at Kordazone Theatre in Windsor, Ontario, on May 18, 2019. Photo by Eric Bonnici / Eyes On Windsor.

“I am thrilled to see Cardinal and Korda join forces to share The KordaZone Theatre,” says Cardinal Music Productions Owner & Founder, Joe Cardinal. “The intimate theatre over on Seminole is magical. People come to it, people want to come to it because the shows presented on its stage are unique and beautiful and challenging and surprising. Cardinal has produced some fantastic work on the KordaZone stage, and I have been able to help my Korda friends with tech and production needs for their shows over the years. We have found inventive ways to create truly memorable productions there. Both companies have helped to raise one another’s public profiles as we’ve made strong names for ourselves. The pandemic has certainly highlighted the need to build things that are sustainable – be they spaces or ideals. Partnerships are a way to do that. More than ever, we need to be there for one another, as people and as artists. More than ever, we need to provide welcoming and safe spaces for our audiences to return to. That’s what this is about, and I’m excited to see what the future holds.” 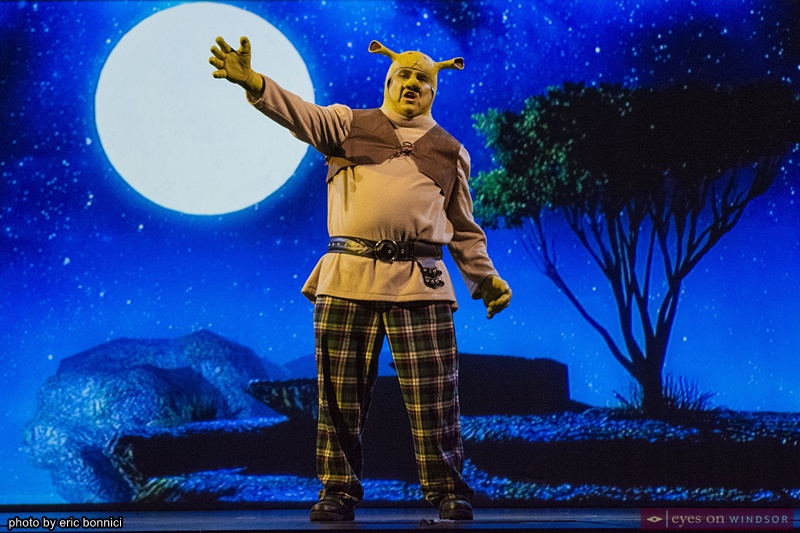 Joe Cardinal as Shrek singing during rehearsal in Cardinal Music Productions’ presentation of Shrek The Musical at the Green Room Theatre inside E.J. Lajeunesse High School in Windsor, Ontario, on Thursday, February 6, 2020. Photo by Eric Bonnici / Eyes On Windsor.

Korda Artistic Productions’ exciting and diverse 2022 Season offers up a stage adaptation of a much loved comedy mystery film that’s based on a popular board game; a Shakespeare tragicomedy; a remarkable Broadway musical that took home 8 Tony Awards®; another installment of the popular Summer Sessions with the Extension-Korda Youth Players; a raucous comedy ensemble that’s smart, sharp and hysterically funny; a hit and hilarious, history-twisting musical mash-up of sixteenth century Shakespeare and twenty-first-century Broadway making its Windsor-Essex debut; and a holiday panto for the entire family to enjoy. Korda’s thrilling 2022 Season includes:

CLUE On Stage
February 3-6 and 10-13, 2022.
Written by Sandy Rustin. Based on the screenplay by Hunter Foster and Eric Price. Based on the Hasbro board game CLUE. Directed by Joey Wright. Original Music by Michael Hollandz. Campy and quick, Clue is a hilarious farce-meets murder mystery playing out at a remote mansion, where six mysterious guests assemble for an unusual dinner party where murder and blackmail are on the menu. Clue is the comedy whodunit that will leave both cult fans and newcomers in stitches as they try to figure out WHO did it, WHERE, and with WHAT?!?!

PERICLES
March 31, April 1-3 and 7-10, 2022.
Written by William Shakespeare. Directed by Jeff Marontate. Pericles is Shakespeare’s touching and hopeful tale of loss and reconciliation, located in a familiar world of precarious journeys and treacherous alliances. Forced to flee his native land, Pericles becomes a refugee at the mercy of sea and strangers. Scarred by the heartbreaking loss of family and home, he submits to the rhythms of the ocean in the hope of a miracle.

SPRING AWAKENING
May 26-28, June 2-4 and 9-11, 2022.
Book and Lyrics by Steven Sater. Music by Duncan Sheik. Based on the 1891 German play by Frank Wedekind. Directed by Tracey Atin. An angsty rock musical adaptation of the seminal play about the trials and tribulations of growing up. Spring Awakening is the winner of 8 Tony Awards®, including Best Musical.

5 LESBIANS EATING A QUICHE
September 8-11 and 15-18, 2022.
Written by Evan Linder and Andrew Hobgood. With contributions by Sarah Gitenstein, Mary Hollis Inboden, Meg Johns, Thea Lux, Beth Stelling, and Maari Suorsa. Directed by David Burrows. In this comedy, it is 1956 and the Susan B. Anthony Society for the Sisters of Gertrude Stein are having their annual quiche breakfast. Will they be able to keep their cool when Communists threaten their idyllic town?

ORIGINAL HOLIDAY PANTO
December 9-11 and 15-18, 2022.
With Korda’s annual fresh take on a familiar tale, expect silliness for the kids, naughty jokes for the grown-ups, bad drag, great music, magic, mayhem, and loads of audience participation for all ages! “… the wink-winking and nudge-nudging will be family-friendly. Adults can enjoy the double entendres, but the slapstick and sight gags are fun for all ages.” – The Windsor Star.

Cardinal Music Productions’ thrilling 2022 Season brings three incredible stories to the stage, told through unforgettable and award-winning music. This year, producer and director Joe Cardinal presents audience favourites from the Cardinal Music vault with a lushly scored retelling of Victor Hugo’s epic story (that became a Disney classic) of love, acceptance, and what it means to be a hero; a musical adaptation of the seminal 1980s film about three unlikely friends taking control of their office and learning there is nothing they can’t do, even in a man’s world; and a descent into the dark, mad, and macabre world of Sondheim’s Demon Barber of Fleet Street.

THE HUNCHBACK OF NOTRE DAME
February 25-27, March 4-6 and 11-13.
Music by Alan Menken. Lyrics by Stephen Schwartz. Book by Peter Parnell. Directed by Joseph Anthony Cardinal. Musical Direction by Bayleigh McLelland. Choreographed by Nina Fasullo. Based on the Victor Hugo novel and featuring songs from the Disney animated feature, The Hunchback of Notre Dame showcases the film’s Academy Award-nominated score, as well as new songs, while the book embraces story theatre and features verbatim passages from Hugo’s gothic novel. Join Quasimodo, the deformed bell-ringer, his devious caretaker, and the beautiful Esmerelda. A sweeping score and powerful story make this an instant classic, with audiences swept away by the magic of this truly unforgettable musical to the world of the iconic Notre Dame cathedral in Paris (537 years before the world watched in despair as fire ravaged the iconic building).

9 TO 5 The Musical
July 8-10, 15-17 and 22-24, 2022.
Music and Lyrics by Dolly Parton. Book by Patricia Resnick. Based on the 1980s hit movie of the same name. Directed by Joseph Anthony Cardinal. Musical direction by Bayleigh Cardinal. Choreographed by Nina Fasullo. Set in the late 1970s, this hilarious story of friendship and revenge in the Rolodex era is outrageous, thought-provoking, and even a little romantic. Pushed to the boiling point, three female coworkers concoct a plan to get even with the sexist, egotistical, lying, hypocritical bigot they call their boss. In a hilarious turn of events, they live out their wildest fantasy – giving their boss the boot!

SWEENEY TODD: THE DEMON BARBER OF FLEET STREET
November 11-13, 18-20 and 25-27, 2022.
Music and Lyrics by Stephen Sondheim. Book by Hugh Wheeler. Based on the 1973 play by Christopher Bond. Directed by Joseph Anthony Cardinal and Bayleigh Cardinal. Musical direction by Drew Beaudoin. Blood flows and crusts rise in Sondheim’s musical masterpiece and triple Tony Award®-winning musical Sweeney Todd: The Demon Barber of Fleet Street. A vengeful mad barber and his practical but ghoulish mistress slash throats and bake pies in the slums of 19th century London. This production reunites Christopher Lawrence Menard and Tracey B. Atin as Sweeney Todd and Mrs. Lovett. The duo performed the roles in the Cardinal/Korda co-production of this musical in 2015. Attend the tale of Sweeney Todd…

For Korda and Cardinal Shows, tickets are also available (unless sold out in advance) at the theatre door, one half hour before shows, on show nights.

We at Korda Artistic Productions and Cardinal Music Productions are committed to making your experience at The KordaZone Theatre a safe and enjoyable time. We have developed a COVID-19 Safety Plan that is continually updated, and that remains consistent with the provincial and local public health guidelines to ensure a safe environment for our patrons, performers, and crew. Our most up-to-date protocols can be found at www.kordazone.com. Please remember this is a work-in-progress, and is continually updated to reflect current restrictions and precautions. Our plan includes guidelines and requirements for entering the theatre, vaccination requirements, masking requirements, and information for ticket purchasing, contact tracing, venue capacity, seating arrangements, and more. Guests are encouraged to read The KordaZone Theatre COVID-19 Safety Plan in advance of attending.

Vaccination Requirement: Everyone wishing to enter the theatre must be fully-vaccinated against COVID-19, and present a valid Government of Ontario vaccine passport with a scannable QR code. Visit https://covid-19.ontario.ca/get-proof/ to obtain your enhanced vaccine certificate with an official QR code if you are an Ontario resident.