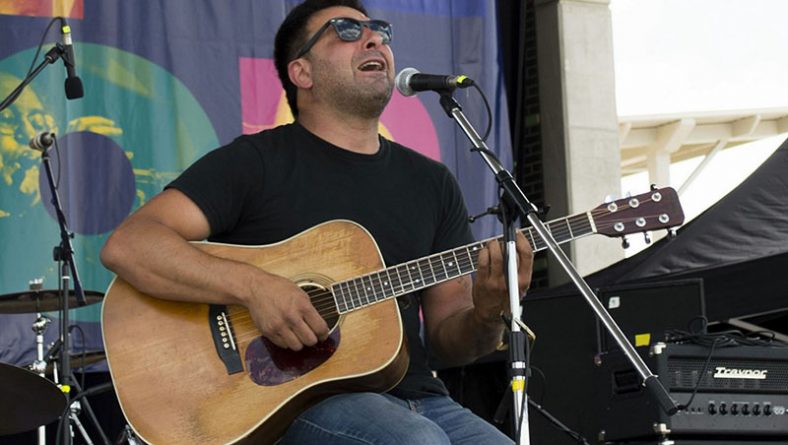 Veteran rocker Jody Raffoul might just be Canada’s best kept secret, hailing from the nation’s most southern town, he is set to release his first studio album in ten years, “9 Wigle Street Leamington Ontario.” Most who have heard this 5th studio album are saying it’s his best LP of all, and it’s all about Jody’s life and his hometown.

“The new record is about my whole life from the last record to this record, which is a lot, I’ve had 3 new kids since then, and then remarried,” Raffoul told Eyes On Windsor during a recent interview. “November marks exactly ten years since my last album.”

9 Wigle is a collection of true stories of love, loss, trials and triumphs with an emphasis on family, all backed by solid music, pure and refined, timeless vocals. Always known for his power, Raffoul shows us that age hasn’t hindered, its only enhanced his music and stage presence!

“I wrote most of the songs, there’s a couple of covers on the record though, like one honouring George Harrison,” says Jody. “It’s a great one, the last song he recorded before he died, off the Brainwash record, called Stuck Inside A Cloud. He really didn’t get a chance to record it the way he wanted to, and I read about it so we did it up our way as a tribute, we’re all big Beatle’s nuts.”

9 Wigle Street Leamington Ontario, also features a cover from 1970’s English rock band, Humble Pie. “We did a Humble Pie song, I did record it in 94 for my first record,” says Jody. “It’s called, You’re So Good For Me, it didn’t make it onto that record even though we recorded it, so we decided to put it on this album.”

Jody says, there’s actually 2 records coming out. “We started recording in May of 2015 in my house, We recorded 32 songs, We chopped it up and there’s 14 songs on this record. And the other one is ready, it comes out in July of 2019.”

To celebrate the first of these two records, Jody will be performing three CD release shows with son, Billy Raffoul opening the shows. They will be hosted by The Bank Theatre in Leamington, during the first weekend of December. While the theatre is currently undergoing renovations, construction has slowed down for the season.

The Bank Theatre Vice President John Moran is excited and in a press release said, “We’re pumped that we’re able to have these CD release shows at the theatre during the very short window of time that we’re open during construction slow down on our renovations. Jody Raffoul has been rocking Leamington, the country and the USA a long time and these shows will bring the house down. Add to that having his son Billy Raffoul, a rocketing star himself to open the shows is icing on the cake!”

Billy Raffoul’s anthemic debut single “Driver” serves as a potent calling card for the 22-year-old singer, songwriter, and musician. His signature sound is a rough-hewn, low-timbered rock and roll that nods to the likes of Jeff Buckley, Neil Young, and Joe Cocker, and is powered by Raffouls’ gravelly, soulful voice and deeply felt lyrics.

Billy Raffoul has been fairly certain of what he wanted to do with his life from a young age, having grown up in a creative family in the tomato capital of Canada, as he puts it. His mother is an artist, writer, and teacher and his father Jody Raffoul is a solo artist and hometown hero who has opened for everyone from Joe Cocker to Bon Jovi.

“One day I went into the studio to sing on some Kid Rock demos,” explains Billy. “The guys heard my voice in the booth and asked if I had any original stuff. I played them two acoustic songs. They shot an iPhone video and sent it to my now-manager, who used to work with Kid Rock. The next day we drove down to Nashville.”

In between playing shows, Billy Raffoul has been collaborating with other songwriters and slowly but surely assembling his debut album. He now splits his time between Nashville and Los Angeles.

Jody told us that Billy actually lives with his brother, and Jody’s other son, Peter Raffoul when in Nashville. “Peter just signed a big record deal with Atlantic records about 6 months ago and is living in Nashville,” explained a proud Jody.

“We watched Billy grow up on this stage at Dale’s Friday Coffee House too and now look at where he’s going,” added John Moran. “There may be a surprise guest as well. What could be better than a show of this magnitude in talent with father and son?”

Jody has confirmed, telling us here at Eyes On Windsor, who that special guest will be, and the hometown crowd is going to love it. Unfortunately, we are unable to announce who that performer will be. Jody wants it to be a surprise and we promised to keep it under wraps.