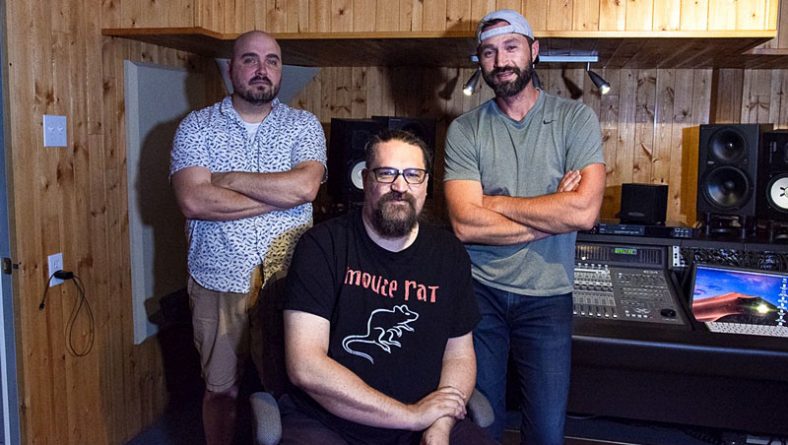 Windsor based band J#Major (J Sharp Major) headed to Riggi Media International Inc. Recording Studios in August of 2020 to record their original single “Reststops and Amusements”. According to band member Kristopher Marentette, “It was supposed to be a one off, we came in and it was really good.” Pleased with the results, the band decided they would attempt to record a whole album. Along the way they faced delays and had to overcome several obstacles related to financing the project paired with a global pandemic. A year in the making the band was in the studio wrapping up their final recording session for their inaugural album, “Songs of Light and Shadow,” back in late July of this year. J#Major invited Eyes On Windsor into the studio to talk about the journey. 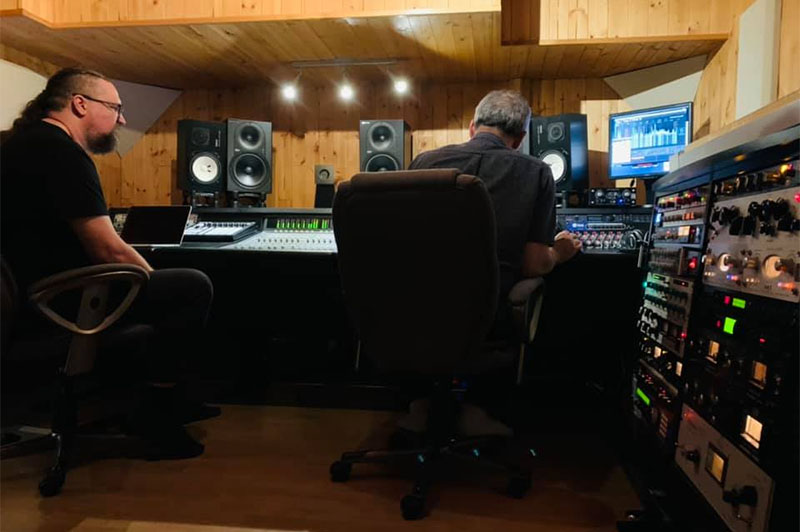 Recording in a professional studio with a professional audio engineer can cost hundreds of dollars per hour, something J#Major wasn’t able to afford. In order to raise funds, Kristopher who is a tabletop game enthusiast thought back to a Kickstarter campaign he held back in 2018 to launch a fun card game called The Earth Is Ours. The Earth is Ours is a hilarious take on good vs evil where one team tries to destroy the earth while the other fights to save it. Kristopher thought why not start a Kickstarter campaign that would pre-sell copies of the album in order to raise funds for studio time.

On the Kickstarter page, “we said there’s going to be eleven songs but we needed people to kick in,” explained Kristopher. “We had different reward levels from a copy of the CD to having supporters’ names in the liner notes. So we had little incentives for people who wanted to contribute more than the cost of the album.” 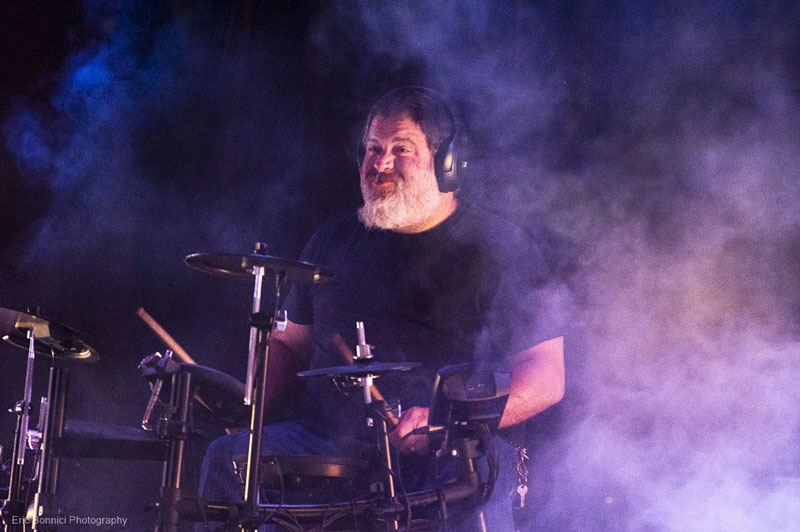 Local drummer Paul Richard performing on opening night of Live Drive Thur, an innovative drive-in style entertainment and dinner series, on the outdoor stage in the parking lot of Rockstar Music Hall in Windsor, ON, on July 9, 2021. Photo by Eric Bonnici / Eyes On Windsor.

Initially some local musicians were not impressed with the campaign. Kristopher says, “We got some flack from local musicians about doing Kickstarter. They said this is something we should be doing on our own, we shouldn’t be out soliciting. All we were doing was pre-orders.” Jim O’Neil added, “people have gotten grants for this type of stuff.”

Kristopher continued, “what’s crazy is that since we’ve done that, Walter (Walter Riggi of Riggi Studios) says, there have now been a number of people in the studio who have done the same thing. They’re starting to see that Kickstarter is a viable way to help out musicians. It was kind of cool, I’m not taking credit for it, but now there seems to be some interest that it can be done this way. I think when I pushed back, those people then thought, well ok it’s not so bad.”

“Walter has bent over backwards here to make our experience as awesome as possible. I can’t say enough good things about this recording studio. We all have the technical know how, we could have done it ourselves and put out an inferior product at a cheaper price. But at this recording studio I don’t have to worry about any of that stuff, I get to come here and edit and play. Then Walter makes it sound good!” 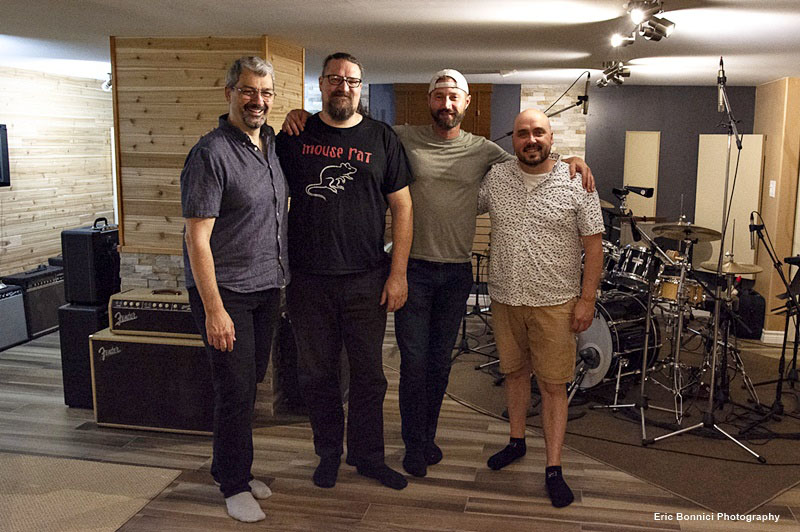 Walter Riggi (left) with J#Major band members, from second from left, Kristopher Marentette, Jim O’Neil, and Lee Cochrane, as they finish recording their inaugural album, Songs of Light and Shadow, at Riggi Media International Inc. Recording Studio in Lakeshore, ON, on July 21, 2021. Photo by Eric Bonnici / Eyes On Windsor.

Walter Riggi also had good things to say about the band. He says, “these guys are superbly professional, I’m blown away, they come prepared and they feed off each other when they’re listening to things. Everytime they come I get excited because there’s no arguments and they keep trying. And that’s what you want to see, it’s creativity.”

With J#Major not having to worry about recording in the studio, they were able to focus on creating music and with that their creativity flourished. “We learned a lot about ourselves, how we function as a group when we’re in the studio,” Kristopher told us. “It’s very much different than I thought it was going to be in a good way. You find when you’re in this space, your creativity goes through the roof.”

All eleven songs on the album are originals. Kristopher says, “a lot of them were songs I had worked on previously that have never gone anywhere. Then Lee and I found that we were incredibly good writing partners. We really work well together and he was able to bring new arrangements in and we rewrote almost all of them. Now the songs are just better, it’s awesome when you get to work with amazingly talented people. I can have all the ideas I want but when we write them together it’s amplified, like a resonator, and everyone plays better because we challenge each other and want it to sound the very best it can.” 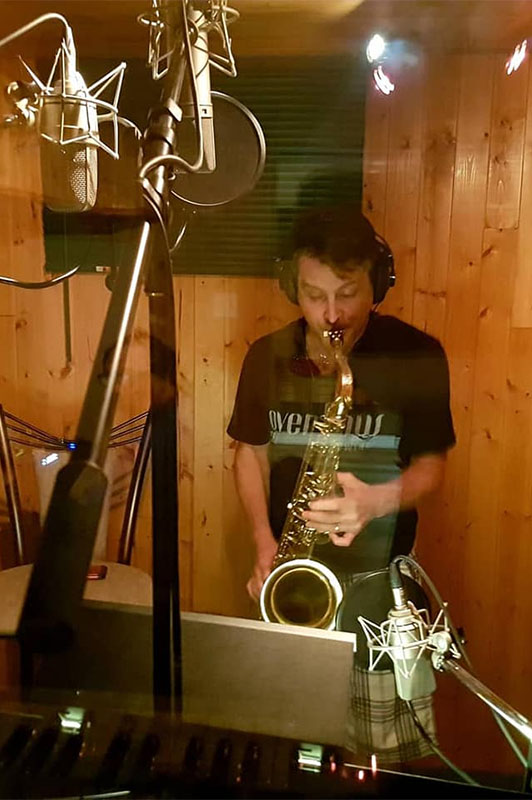 Lee says, “everyone has put in their own two cents as well, when we wrote and arranged the songs everybody else added to it. It’s definitely a collaborative effort.”

Kristopher added, “there’s been times when Lee and I have written something together, and the drummer will say that’s cool but have we thought about doing this? No. That’s great!”

When recording the final song, “Willistead Mid-Winter,” Kristopher says, “Walter and I were mixing the last song, speaking of creativity, and we were like there’s something that is not right. Once you start to level and balance everything out you see these holes. It’s almost like the song is a pile of sand, you’re walking on it as the sand starts to settle, and then all of a sudden a pocket opens up and you fall in. It’s like ok something is not right. Something has to be here to support this part. So we ended up recording a Hammond organ part over the entire structure of the song to support it. So surprises like that pop up and what you expected to take an hour takes seven hours.” 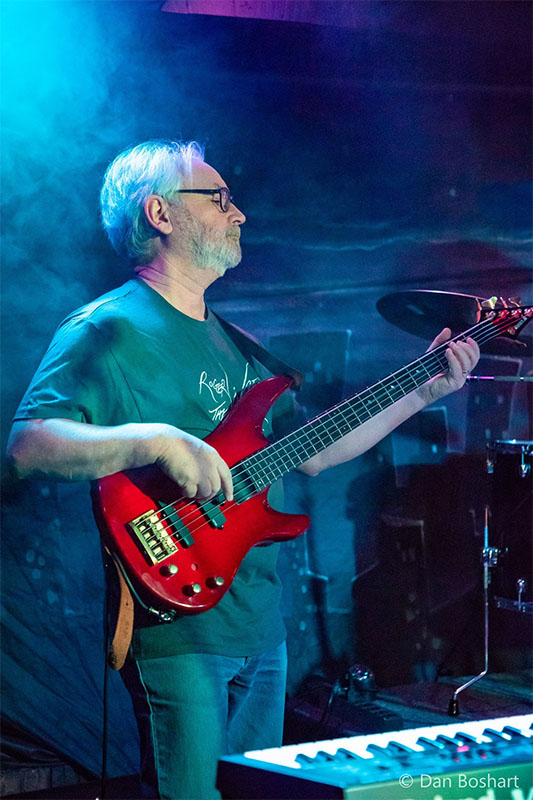 Marc Haslip, member of J#Major, performing at The Lion’s Head Tavern in Windsor, ON, circa 2018. Photo by Dan Boshart.

Lee explained that they wrote and arranged everything last summer working on the songs everyday over a two week period. With the songs written, completing the recording sessions was not easy because each band member works a full time job outside of the band. As Jim explained, “that was the problem with getting the recording done. We’re all busy.” Kristopher added, “it’s trying to get six people’s schedules to coordinate and then you throw COVID into the mix. Everybody was good to get together at the studio on certain weekends but then we couldn’t stick to that because all of sudden we’re in lockdown.”

Lee said, we recorded the first song in August of 2020. We had told people the album was going to be released in November 2020. And now we’re looking at August 2021. We’ve been very clear with everyone on Kickstarter posting updates that it’s still happening but COVID has made things impossible and they’ve been very patient and that’s great. Tonight we should walk out of here with a CD.”

“Songs of Light and Shadow is a perfect amalgamation of emotive composition and beautifully wrought lyrics,” says Kickstarter backer of the album and local singer Danielle Samson-Lembke (Dani Blackbird). She was delighted when her copy of the album finally arrived. “ I love the poetry of it all.” 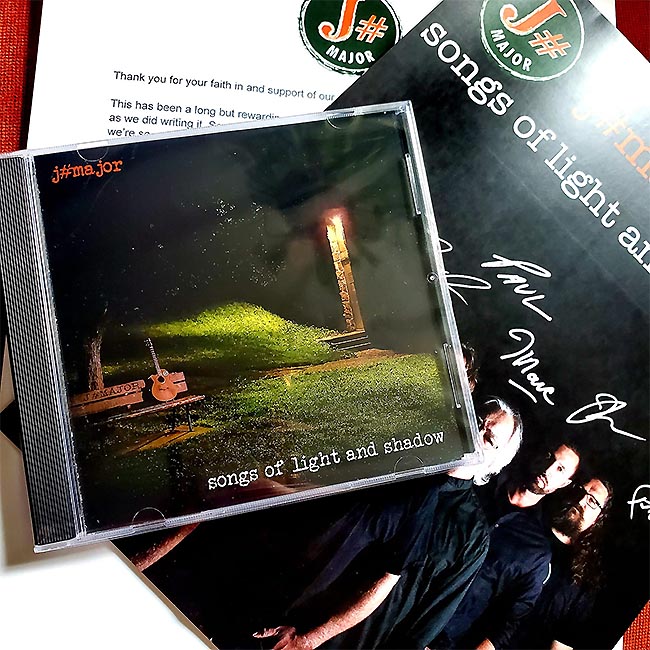 In a recent review of the album, Owen Jones, retired Windsor Star entertainment writer says, “these guys may be known for their love and respect for Pink Floyd, but I’m hearing all sorts of other influences, too, from Traffic, Peter Gabriel and Paul Simon to Cat Stevens and even Gordon Lightfoot. But by the album’s end I realize any such influences are just the starting point for this ambitious and satisfying project.”

Songs of Light and Shadow is available for purchase at Dr. Disc Records in downtown Windsor (471 Ouellette Ave.), Vintage and Vinyl in Lasalle, ON (891 Front Rd.) and Karma Wine & Whisky Lounge in Tecumseh, ON (12205 Riverside Dr. E.). 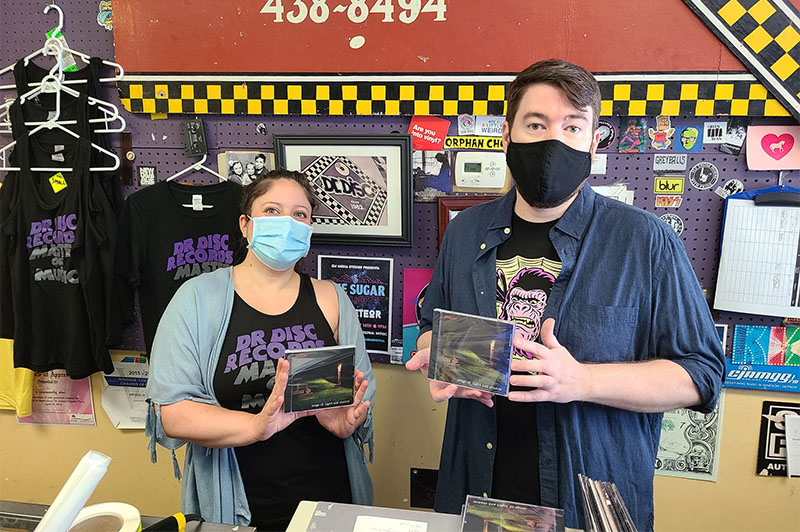 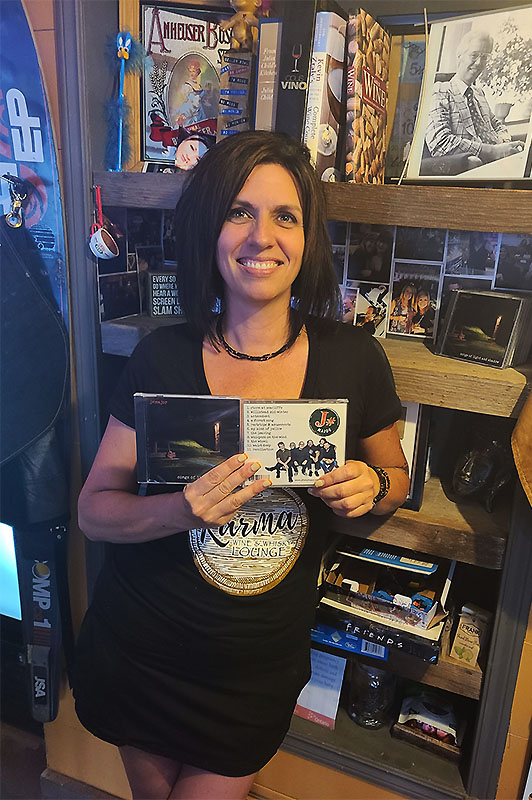 The album can also be found on several online streaming platforms, for a full list visit https://spinnup.link/473911-songs-of-light-and-shadow