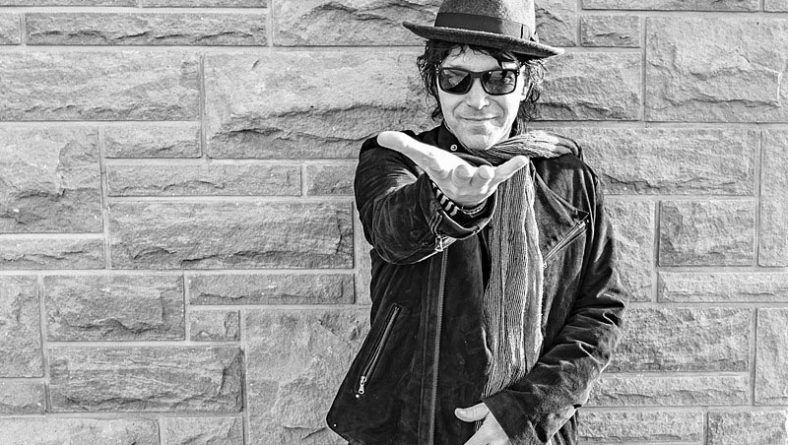 In an interview with South River Slim, the Blues Roots and Rhythm energetic live performer talked to Eyes On Windsor about upcoming plans, band members, and new tracks he’s releasing including “Love Letter.”

“I’ve got a bunch of new releases coming out and they’re a little different,” says Slim. His original music mostly transmits an upbeat soul vibe. South River Slim often integrates fun and silliness into some of his songs too. “I put comedy in some of my country songs like ‘Cracker Girl’,” explains Slim. His song “40 Day Crawl” is a hybrid ballad with some soul mixed in. 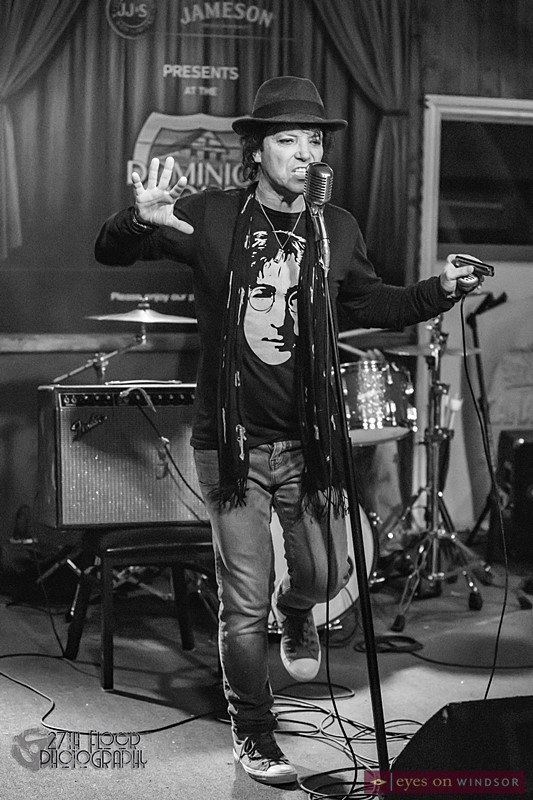 His latest release, out earlier this week, “Love Letter” is different. “It sounds like old country weeper,” says Slim. “It’s more of a traditional country style ballad, it came out really good, I really like it, the writing is different.” Complete with country twangs, harmonica, a forsaken love and what could be written in a tear smeared love letter, this song is clever and catchy.

The song was recorded at John Law’s studio in Kingsville. John is one of the South River Slim band members. John and his wife, Michelle, are accomplished performers who make up the award winning folk duo, The Laws, and are organizers of the annual Kingsville Folk Music Festival.

This week “Love Letter” has been released to several radio stations and is available online at Bandcamp.com 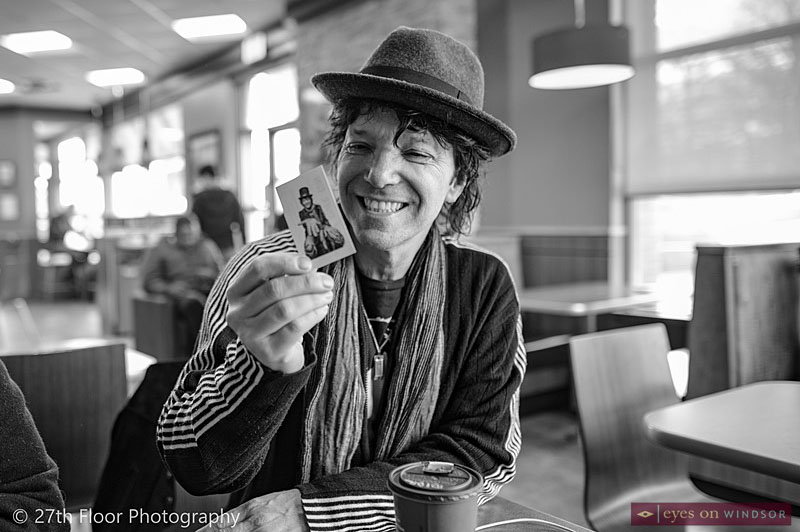 South River Slim holds up his business card during an interview in Windsor, Ontario, on Thurs. Jan. 10, 2019. Photo by Dan Boshart / Eyes On Windsor.

“Buckle Up Baby” an upbeat tune with Slim’s signature comedy was released in April of last year. It was picked up for use in a scene from Black Fawn Films and Breakthrough Entertainment’s newest horror crime thriller, “I’ll Take Your Dead,” which made its world premiere in Calgary on Sept. 27, 2018.. Directed by Chad Archibald and written by Jayme Laforest, the film features a man who disposes of bodies for gangsters in a nearby city. He faces a difficult decision when one of the “corpses” turns out to still be alive. The movie is currently on the film festival circuit. “I haven’t seen it because it hasn’t been released yet,” explains Slim. “It’s been at a lot of film festivals. The song is in a scene, so the main character is taking to his daughter and ‘Buckle Up Baby’ is playing on the radio, it’s kind of cool.” 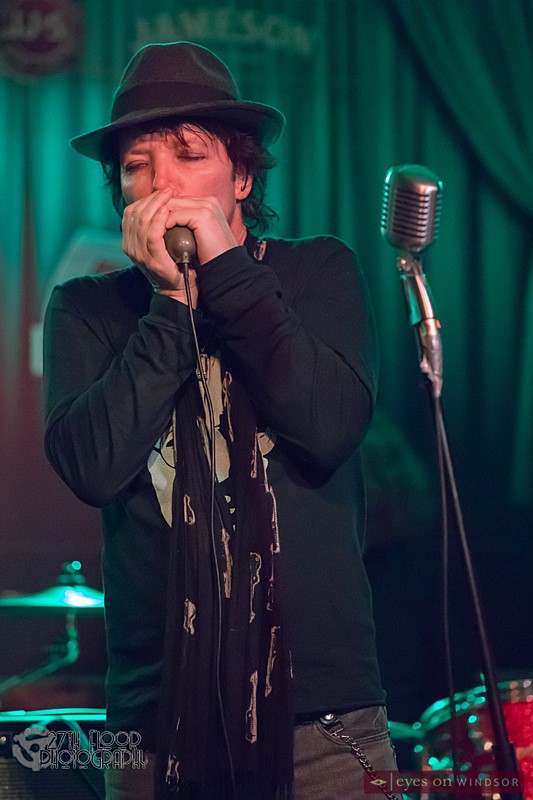 South River Slim performing on the harmonica at the Dominion House Tavern in Windsor, Ontario, on Sunday, Jan. 13, 2019. Photo by Dan Boshart / Eyes On Windsor.

Slim’s music and high energy live shows will be exposed to a new and bigger population. For the past six or seven years he’s performed mainly in the Windsor Essex music scene. This Spring and Summer Slim plans to perform shows in the Niagara, Hamilton, St. Catharines, and Toronto area.

“I’m going to be getting a part time place and spend one week a month there,” Slim says. He is also planning several short, four to seven day tours, with one or two daily stops between Windsor and Montreal.

In addition, he is looking into performing at venues across the country. “I have connections in places that want me to play all the way out to B.C. and out East,” explained Slim. The challenge is not just that he coordinates all the bookings on his own but his band members availability also comes into play.

“I hope my band can join me when I tour in the summer, most should be able to, that’s why I’m doing those short tours, so it’s easier for them to come along,” said Slim. Band members Dale D’aimore and John Law, are as Slim says, “down to do it.” Drummer Adam Thomson “is kind of down to do it as long as it works out with his schedule. He has a job teaching every day, so he can’t just leave everything to tour.” 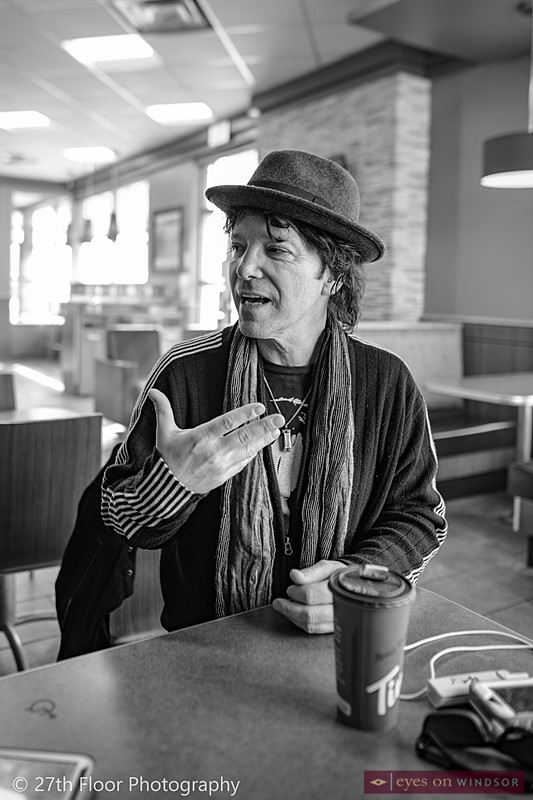 South River Slim talks over coffee during an interview in Windsor, Ontario, on Thurs. Jan. 10, 2019. Photo by Dan Boshart / Eyes On Windsor.

South River Slim has toured and performed for many years around Canada and the USA, prior to relocating in Windsor, sometimes making extended stays along the way. He has met and built up a network of musicians, who know him and his music, so finding someone missing from his band during tours is not usually a problem. “I know a lot of people everywhere, I’ve done tours in California, and Clarksdale, Mississippi. In Hamilton there’s a bunch of great musicians really similar to these guys (his Windsor band), so there’s bands around that I can use.”

South River Slim stressed his appreciation for his band. “The guys I play with, they’re excellent musicians, and have to do with why I’m popular. I assembled them because of all their distinctive sounds, but they get passed over in every story. They mean so much to me.” 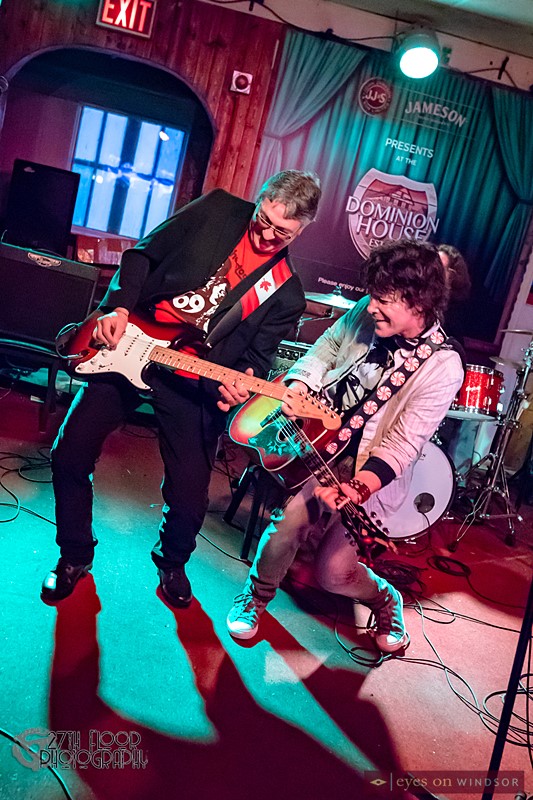 “Dale D’amore is part of Guitar Army, he’s been around the city for a long time. With me he plays guitar and back vocals. Adam Thomson plays drums and he’s in other bands too. He has a duo with his wife (Lex Lambert) called Strange Cats. I play with a few different bass players but the one I use lots is Kevin Peterson, he’s been around forever and he does the Victoria Tavern (with The Soulminors) every Thursday. I have Max Marshall or Mike Fortier come out on bass sometimes too. John Law, he’s a friend (they went to high school together in Chatham), we did some of our first live shows together, one was in front of my mom, it was him and I in the kitchen, she was our audience.” 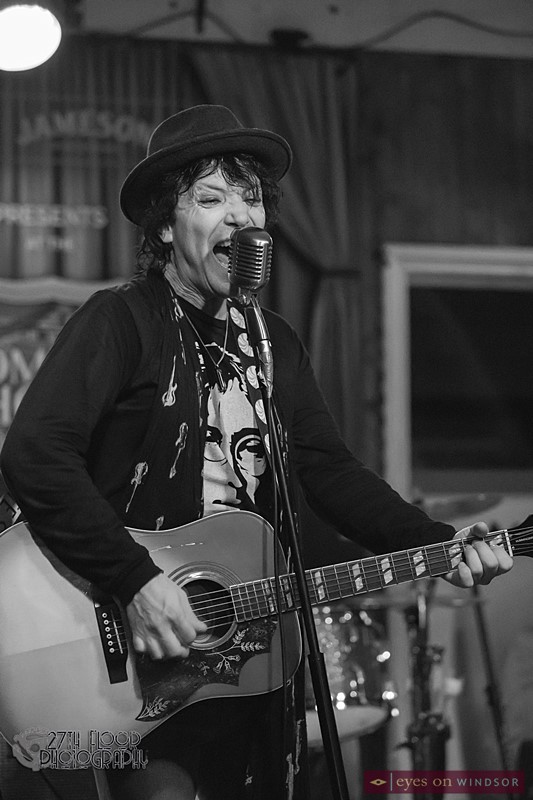 Slim says he’s been lucky with the musicians in the Windsor area. “I try different pieces of the puzzle,” says Slim. Patrick Wright on Sax played in the band a few times. Andrew Iles (The Wanderlust Club), currently pursuing an acting career in Strathroy, is on a lot of South River Slim’s early recordings. Derek Impens (The Brandy Alexanders) has played drums for Slim. Young Grady Caplin, a native of Windsor and member of Chicago based Blues rockers The Instinct Band sometimes plays and “It’s almost like mentoring,” says Slim. These are some of the musicians that have joined South River Slim along his journey of performing and recording music. “It’s good to have those guys around.”

So when a band member is not available to perform or tour, South River Slim always has someone who can fill in. “It’s like boom they already know the stuff,” says Slim. 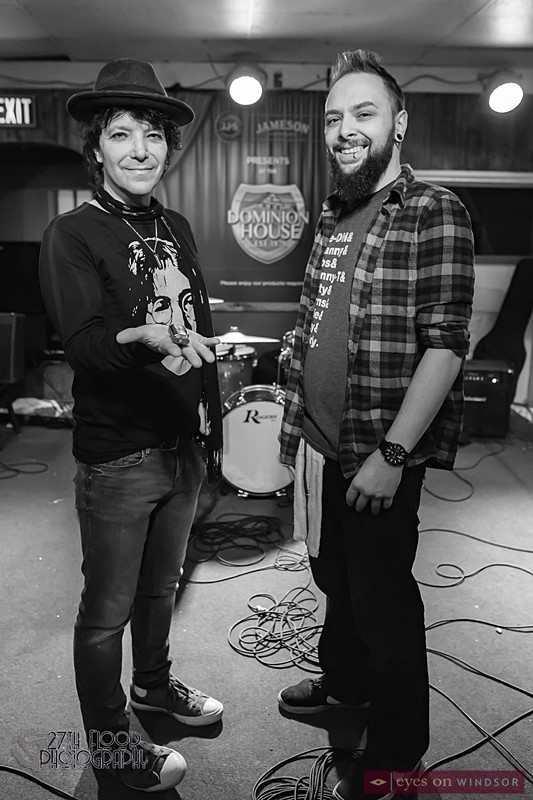 Most importantly, South River Slim stresses to his band that performing is all about having fun. “We’re putting on a show for people to see not only to hear so its about having fun,” Slim explained. “You’ll see the people that I play with have a good time and have a smile.”

South River Slim has confirmed, although it has not been officially announced yet, that he will return to perform at Bluesfest Windsor 2019. In addition, to several upcoming gigs, Slim will be fronting two different bands in February, one in Hamilton and one in the Niagara area. A possible EP release show may also take place in Windsor sometime in the Spring. Slim also performs regularly in Windsor at Jake’s Joint (2300 Huron Church Rd.) on Wednesday nights and The Dominion House Tavern (3140 Sandwich St.) on Sundays. 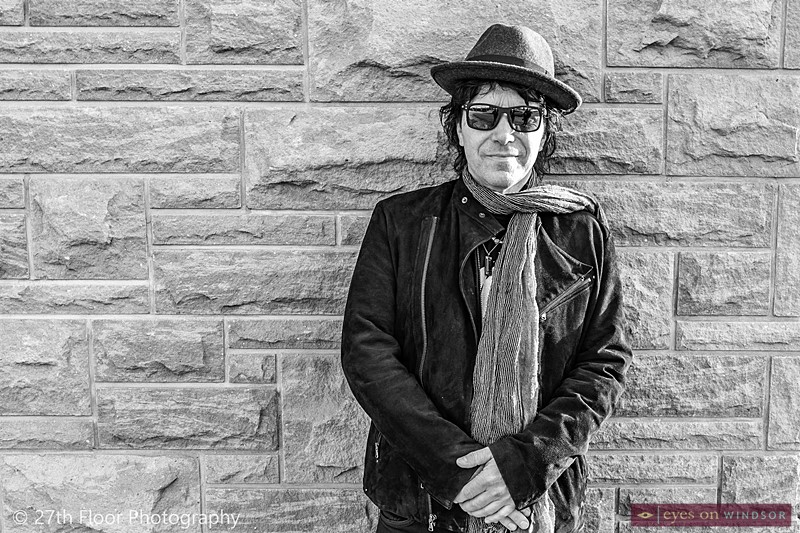