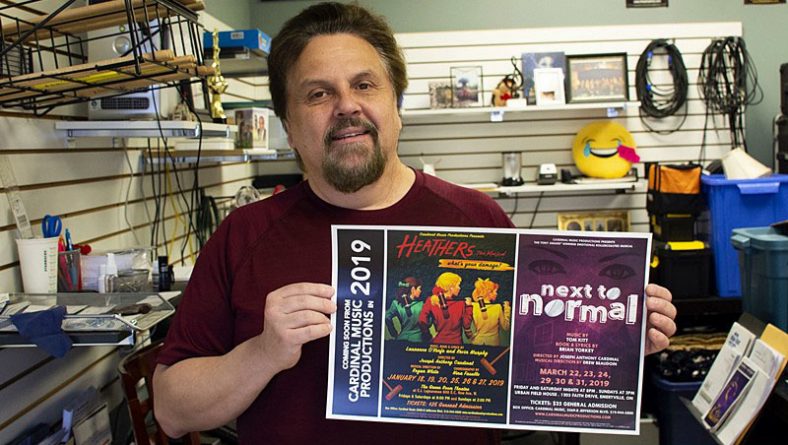 Cardinal Music Productions will open their first production of the season, Heathers The Musical, next weekend starting (Jan. 18). Director and operator of the theatre group, Joseph Anthony Cardinal, took the time to tell Eyes On Windsor about it in an exclusive interview.

“If you’ve seen Mean Girls, that’s the thing people equate Heathers to now, it’s life in high school and the three Heathers are the girls that everybody wants to be but they’re also bitches,” says Joseph. “They’re above it all and look down on people. Veronica Sawyer is a girl that thinks she wants to be a Heather. She thinks that’s cool and she abandons some of her friends along the way. It all comes full circle and she finds out that it might not have been a cool idea.”

Joe chose to produce the musical for a couple of reasons. “We did Healthers last year, I love the music for it, the score is very catchy, and it’s presented it in such a fashion that the music kind of hooked you in,” he explains. Joe also remembers enjoying the movie of the same name in the late 1980s. This also factored into why he chose this production. The subject matter of the movie and the musical, bullying, is something that he hopes this production will raise awareness about.

“I watched it (bullying) happen in my school, and I’m sure everyone of us has seen some sort of bullying in our school,” says Joe. “It happens even to this day, and now with the internet, there’s all the cyber-bullying that’s going on, I find it even worse.”

“Actually, Heathers delivers quite a message,” says Joe. “It presents itself in such a fashion that you can see that ultimately bullying isn’t the thing to do.”

Cardinal Music Productions is also putting on Heathers for a second time, in part, because they had to cancel Avenue Q which was scheduled for this time slot. With some of the cast being from out of town they couldn’t get a rehearsal schedule down. “I can’t justify doing a show and not rehearsing properly, I had the theatre booked and I wanted to make sure we fulfilled the dates so we chose Heathers again,” explains Joe. “75% of the cast is new to keep it fresh.”

“They’ve made this story interesting by killing some of these characters but they come back as ghosts,” explains Joe. “Heather Chandler drinks poison, dies and comes back as a ghost becoming kind of like Veronica’s conscience.” The two obnoxious football players, Kurt and Ram, are also killed during the play but they come back as ghosts. “Anytime you see someone in a horror film that does something obnoxious or that they’re not supposed do, then you know they’re the next to die.”

Although Cardinal Music Productions is working hard to get their name out there, which is challenging, they are still willing to give back to the community. Since their production of Hunchback last year the theatre group has been giving free tickets to select non-profit organizations such as Family Respite Services, Windsor Hospice, and John McGivney.

“For Heathers we’ve given out 200 free tickets to various groups in town, as a way to give back to our city,” says Joe. “It helps us to build an audience.” Joe says a lot of people in the community either don’t know they exist, or think they only produce plays for high schools. The misconception stems from the fact that Cardinal chooses to put on plays at E.J. Lajeunesse. “I do it at the high school because it’s cost effective. It takes years to build up an audience. It also lets me afford to give free tickets out, it helps me and it helps the community groups.” The ticket program gives people who might not be able to afford to see live theatre the opportunity to do so. “That’s something I’m proud of that we’re able to do.”

An added bonus to producing shows at the high school is that there is plenty of parking and it’s free.

For more information visit http://www.cardinalmusicproductions.com or see the Eyes On Windsor Events Calendar listing for Heathers The Musical