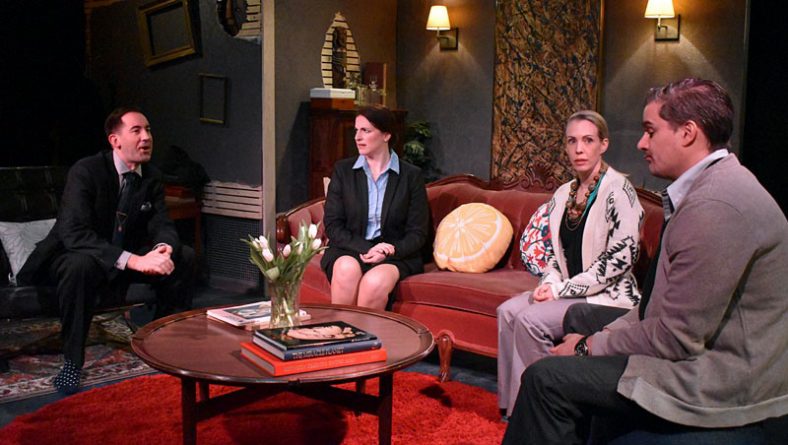 Hot on the heels of its successful – in more ways then one – Yazmina Reza’s Art, Windsor’s Ghost Light Players tackles another Reza play, the extremely complex but highly entertaining God of Carnage which has no winners but four losers.

The plot seems simple enough. Two parents meet to discuss a schoolyard incident. It turns out bad for their eleven-year-old sons. One, Benjamin, wields a stick in a combat about gang membership which removes two incisors, one permanently, from the other family’s son Henry. The father of the aggressor child, Alan Raleigh, played with the corresponding distraction of a jet-setting lawyer by Jeff Bastien, seems nonchalant about the whole affair to the point of bringing up the fact about teeth being replaceable.

That, of course, as can be expected in a drama, doesn’t go over well with the Novaks, Michael and Veronica, acted with considerable disharmony by Matt Maenpaa and Elinor Price. A small, thrown out comment sets the stage for what becomes an evening from Hell, with a number of the characters characterizing it is the worst day of their lives. 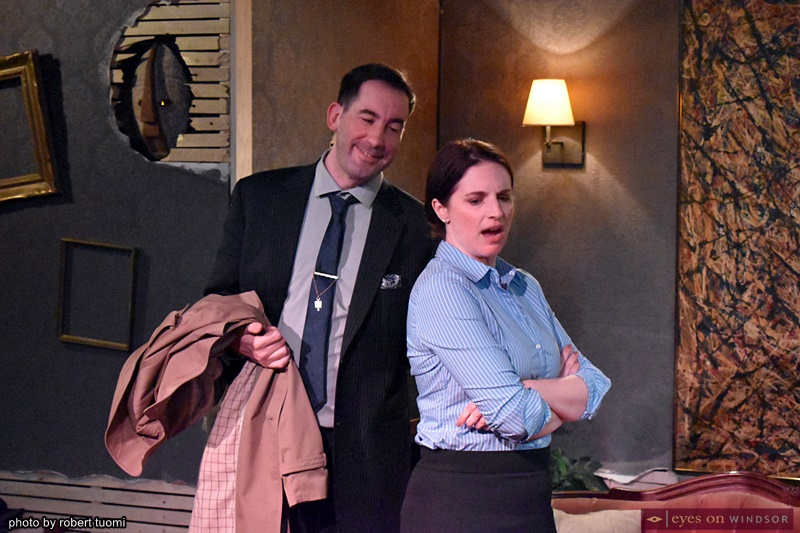 Actors Jeff Bastien (left) as Alan Raleigh and Kristen Dias as Annette Raleigh performing during rehearsal of Ghost Light Players production of God of Carnage at The Shadowbox Theatre in Windsor, Ontario, on March 5, 2020. Photo by Robert Tuomi / Eyes On Windsor.

It may be, and that is the genius of playwright Reza. She has cleverly constructed a situation in which circles of mostly unresolved aggravation overlap. Before you know it, the stresses in both the Novak’s and Raleigh’s marriage are frontally exposed. Mrs. Novak explains her situation best when she blatantly says to her husband that whatever “comes out of your mouth destroys me.”

Although Reza’s script meticulously drops subtle hints of what is to come, even more information is transmitted through body language. All four actors, including Kristen Dias as the very upstanding financial manager Mrs. Raleigh, are masters of the art of expression adding a most effective element to their acting.

All is not well, and being so puts the audience on the edge of its seats as its members watch what will certainly be a car crash of considerable proportions. When it will happen, is another question. The only constant is, it is imminent. While inamicably discussing their children’s incident, they gently move into what Bastien tells Eyes on Windsor is some “action.” 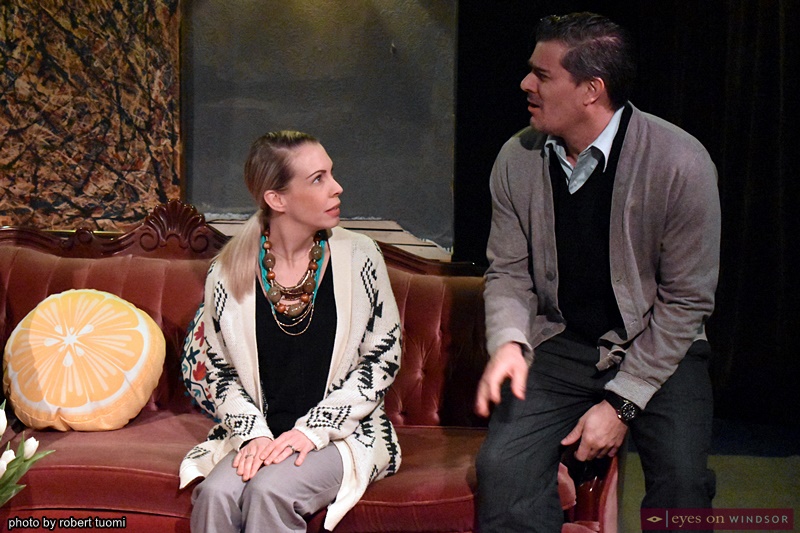 Elinor Price (left) as Veronica Novak and Matt Maenpaa as Michael Novak performing during rehearsal of Ghost Light Players production of God of Carnage at The Shadowbox Theatre in Windsor, Ontario, on March 5, 2020. Photo by Robert Tuomi / Eyes On Windsor.

It becomes, to some extent, a free-for-all, but the sparring is not just among the two groups of parents, but, just as often amongst the married couples themselves. It is a twisted plot for sure and moves into high gear when Mrs. Novak right out and bluntly asserts the young Raleigh scion has disfigured her boy.

While boundary lines are quickly drawn, no one is demarcating the lines between the two husbands and wives. Add to this alcohol and considerable planned distractions the result is exceptional progressive anticipatory action. And like the pending accident, the audience is totally unable to look away. Eyes are glued, so to speak.

Although the play was written in 2004, it bears more than just passing resemblance to the arguments found daily among feuding Facebook posters. The language in the play, much like the accusations made by these posters, becomes extremely sharp and when points don’t seem to be on track, well, if nothing else, Reza simply proves apples rarely fall far from their trees.

Another brilliant aspect of her script is the small talk as the couples introduce themselves. It is undeniably awkward and highly artificial and suggests no matter how hospitable it all starts, these two pairs will surely not become boozing buddies. A double entendre for sure. 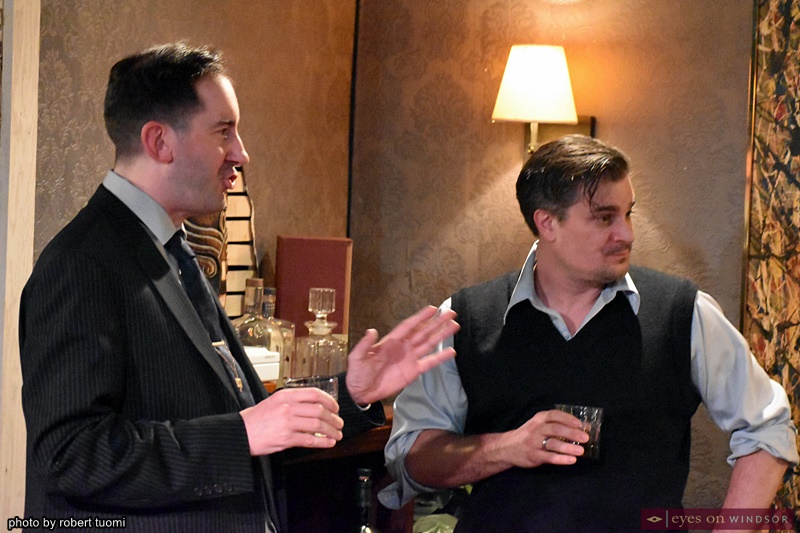 Actors Jeff Bastien (left) as Alan Raleigh and Matt Maenpaa as Michael Novak performing during rehearsal of Ghost Light Players production of God of Carnage at The Shadowbox Theatre in Windsor, Ontario, on March 5, 2020. Photo by Robert Tuomi / Eyes On Windsor.

Last month Ghost Light brought back Art to put it in contention for a place at the 2020 Western Ontario Drama League Festival (WODLF), being held in two weeks in Cambridge. The good news, Art is in.

Doing a second Reza production is most pleasing to Bastien, mostly, as he told Eyes on Windsor, because of the cast. Its four actors, he says, really click together and he was very much looking forward to working with them to take the script to the next level in a manner not all unlike improv. There is, as he explains it, considerable collaboration between the actors, they don’t rotely follow the script night after night.

In other words, not every performance is precisely the same. And although it is not overt, it is very clear the actors are very much enjoying themselves, a bonus for a play with much to see.