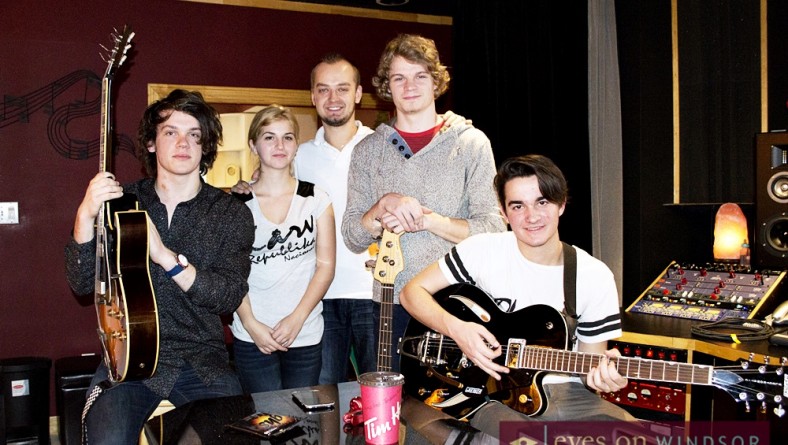 On January 29, 2015 SieraSlave was already back in the studio recording yet another hot original track called “Dead Heroes.”

The band accelerated quickly onto the local music scene immediately after forming in mid 2014. They completely sold out their CD release show at Venue Music Hall on December 14, 2014.

Seth “Hootie” Perera, owner of Venue Music Hall says, “you not only want a band that brings in the crowd (they sold out the show) but one that also engages the crowd, brings a party atmosphere, and entertains the crowd, which SieraSlave definitely did.”

A promotional video, part of the band’s electronic press kit (EPK), was created that included footage from the CD release show.

The band’s debut CD was recorded over 9 days in October and November with Marty Bak at SLR Studios in Windsor. “The band is very new and young on the scene, which gives them an edge and new life without even taking their music into account. 2015 will be SieraSlave’s Preeminent Year Yet,” says Bak.

According to Bak SieraSlave has a huge advantage. “Not only are all members extremely talented at what they do, but they’re young, they have TWO great lead singers, an outstanding female drummer, collective drive, passion, and very supporting parents to add more fuel to their fire. I’m very excited and looking forward to seeing their success in the near future,” states Bak.

The band’s massive momentum continues to turn heads in 2015 with their high energy performances and raw talent.

In January 2015 they’ve already played in an all star line up of local talent at The Local Stream Magazine Launch Party and attracted the attention of an independent record label while performing at The Dominion House Tavern’s Blacktop Records Showcase. Blacktop Records was in town to watch local bands perform.

Chris Mickle, co-owner of The Dominon House Tavern, says, “SieraSlave put on a great stage show and their musicianship abilities are excellent. Ben Andress from Blacktop told me he was interested in putting his record label’s support behind the band.”

During the Blacktop Records Showcase the band performed their song “Indigo” for the first time. Written by SieraSlave vocalist / guitarist Dane Roberts, this song is about Indigo children, those with special or unusual abilities, and sometimes supernatural traits or abilities. “I got the idea for the song from my cousin Leanne,” says Roberts, “ the part that got me was apparently these kids are scientifically proven to be more creative. I wrote the song about these kids stacking it with counter melodies, so its kind of odd, constantly moving, and unpredictable. Pretending as though an Indigo child wrote it.” This song is yet to be recorded by the band.

The band was back in the studio in late January to record “Dead Heroes” with Marty Bak. When asked what is it like to record with the young members of SieraSlave in the studio Bak said, “working with SieraSlave was a blast, especially because we filtered and bounced back ideas to delineate all songs before actually stepping into the studio, it made the atmosphere more relaxed and fun while leaving more time available for experimentation. Part of the reason everything went so smoothly is because of how musically sharp all members of the band are. If ever a specific section of a song needed more attention, and I asked for a different/better drum fill, or guitar lick, they would fire them off without any hesitation or problems.”

While speaking with SieraSlave at SLR Studios during the recording of “Dead Heroes” the band confirmed they’ll be rockin’ at an exciting upcoming show organized by Tom Lucier of Phog Lounge. Lucier has a long track record of supporting local music. The show is tentatively set for March 28 at the Olde Walkerville Theatre. The Kerouacs will open the show and Windsor’s very own Ashes of Soma will headline. Ashes of Soma, influenced by bands like Tool, Disturbed, and Finger Eleven, have toured the US and Canada with Candlebox, Default, Hinder, and Theory of a Deadman just to mention a few.

Organizers will announce details publically once everything is finalized (Update: Walkerville Theatre Concert Details Have Been Released). And remember you heard about it first here at Eyes On Windsor!

SieraSlave will hit the road and perform at their first out of town show on February 7, in London, Ontario.

“I see SieraSlave achieving more radio success, as well as playing direct support for many major music artists,” says Bak. “They have the talent and stage show for it, so why not give the people more than what they pay for? They’re extra hungry and passionate about their music, so with their hard work, they may protrude the face of contemporary music to set precedence of a new style/sound.”

For more information about the band visit SieraSlave.com