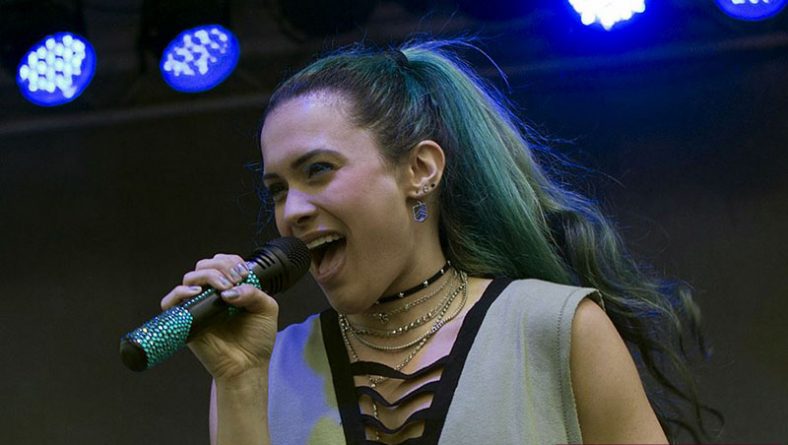 Windsor’s blue haired pop rock sensation Christie Palazzolo delivered an explosive pre-fireworks concert, connecting with people of all ages during the Lasalle Strawberry Festival. Powerfully singing a solid mix of outstanding original and cover songs, Christie’s on stage dancing, interacting with band members, and the audience made for a fun night out!

Christie had people up and dancing, closing out the set with her captivating original, Light It Up. The title of the track, a song with a powerful meaning, was a perfect fit for fireworks night. Ultimately, “Light It Up” is a personal anthem that Christie wrote for herself two years ago during a time of questioning whether she could succeed in the music industry.

“I was going through a difficult time coming to terms with the fact that many people don’t understand or support this crazy dream of mine,” explained Christie. “I have heard more than a handful of times that it is a difficult career path. There was one day where I kind of broke down and thought to myself, is this where I’m supposed to be? What if it doesn’t work out? What if I don’t achieve my goals? Should I have a back up plan?” 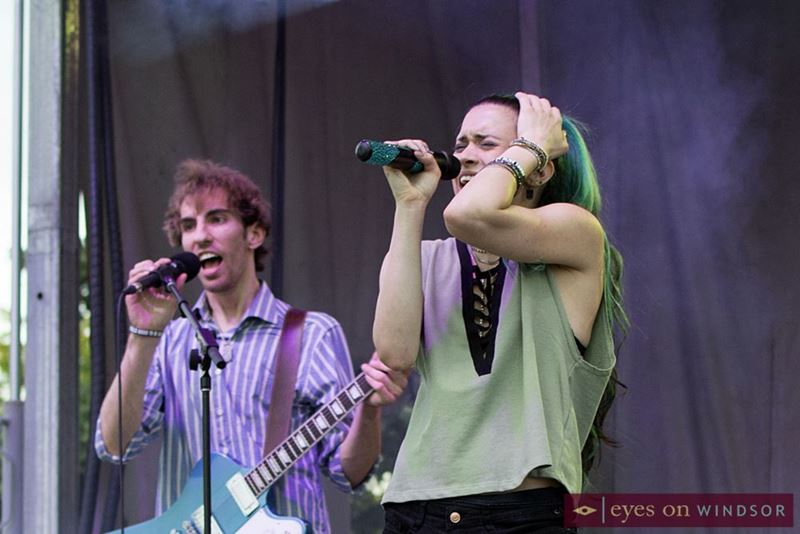 Christie told us she has had confidence issues since she was very young, although that didn’t show when she was on stage performing. There weren’t any signs of shyness or lack of confidence. She danced, she interacted with the crowd, jumped onto her drummer’s platform , and even played the acoustic guitar as she gathered on the right side of the stage with her bassist and guitarist to jam. With her confidence shaken Christie turned to her parents who are always there for support.

“My mom has always been there to bring me up when I felt so poorly about myself. Her advice has always been, ‘You have to be strong and believe in yourself, because you have a gift’. My dad has always said to me ‘If you want it, go get it.'” 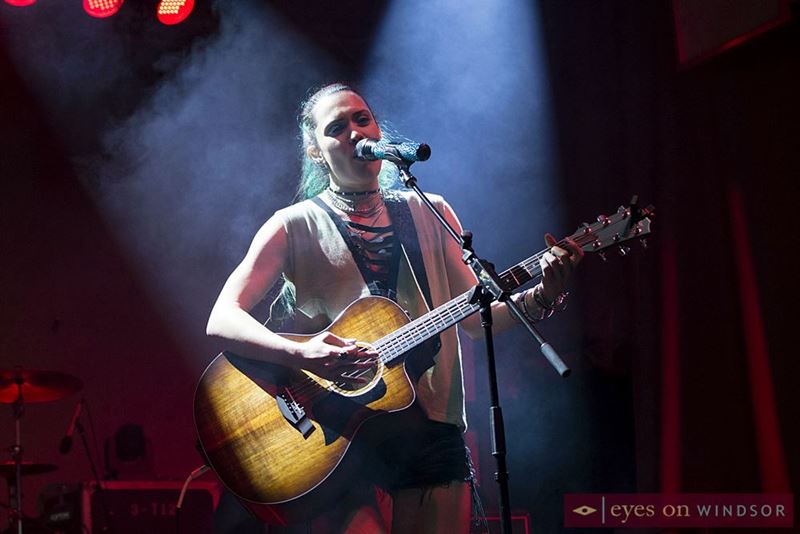 Christie Palazzolo plays the acoustic guitar while performing at the Lasalle Strawberry Festival on June 8, 2018. Photo by Eric Bonnici / Eyes On Windsor.

“Light It Up” references a specific conversation Christie had with both of her parents about her dreams. The song was written to prove naysayers wrong and as a motivational tool she can tap into whenever needed.

Lyrics in the song include; “You’ll never hold me back I ain’t backing down,” and “my momma told me turn it up, you gotta stand tall, when you feel small, ya they tried to bring me down but daddy told me sing it loud, show ’em what you’re made of girl, let your name light up the world!”

“I reached a point in my life where the people around me kept telling me this was too hard, and I wanted to prove them wrong. So I wrote this song as an anthem for myself, for all those times that I am feeling like I can’t do this. I go back to that song and remember who I am.” 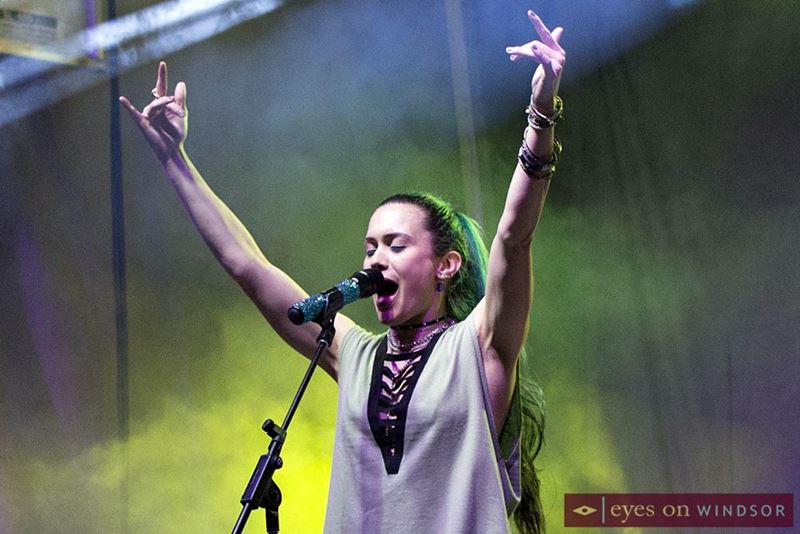 Christie Palazzolo holds both hands in the air while singing at the Lasalle Strawberry Festival on June 8, 2018. Photo by Eric Bonnici / Eyes On Windsor.

Christie credits the talents of Windsor’s Martin Bak of SLR Studios, who produced and engineered the song, for giving the track an extra edge. “He totally helped bring this song alive for me. It turned into more than I imagined it, and still to this day when I listen to it, it makes me want to dance around and scream it to everyone around me.”

Being a song people can relate to, Light It Up is not only a motivational inspiration for Christie Palazzolo, but for her fans as well. When her performance concluded at the Lasalle Strawberry Festival, it was as if that first firework lighting up the sky represented Christie, with the others being her fans.

Eyes On Windsor predicts Christie is well on her way to “Lighting Up The World With Her Name” and has definitely chosen the perfect career path. We first saw and heard her perform during the 2013 Windsor Canada Day celebration at Riverfront Festival Plaza with the finalists for the International Children’s Games (ICG) theme song competition. She ultimately won and performed at the WFCU Centre during the ICG opening ceremonies in front of ten thousand people in attendance from over forty countries while being broadcasted live all around the world. Fittingly, she joined Juno nominated singer/songwriter Suzie McNeil to sing “Don’t Stop Believin'”. Since then she’s accomplished a lot more.

For Christie Palazzolo focusing on her music career, as she puts it, “is the only thing that is 100% honest and authentic for me. I love it with my whole heart, and I’d be lying to myself and everyone else if I did anything else claiming to be happy.” 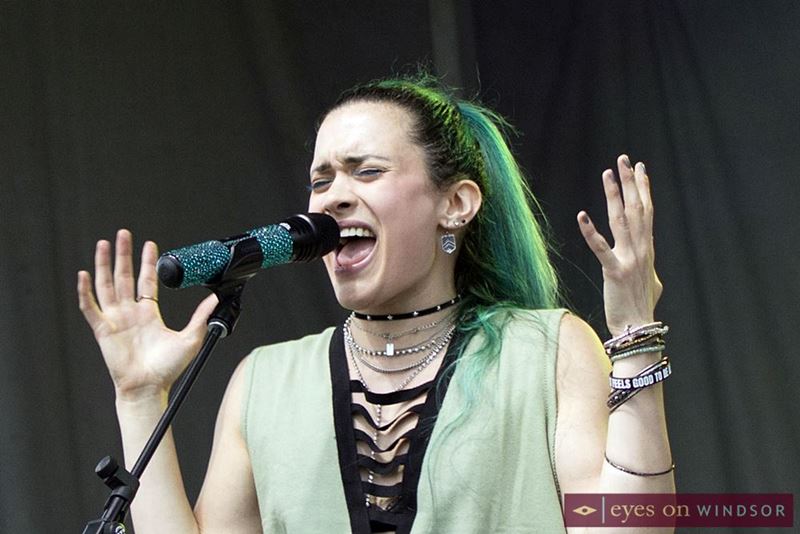 Christie has released several original single tracks and her first four song EP, Alive Today, was released two years ago. During the Strawberry Festival she quickly mentioned she has new music coming out soon but quickly stated she couldn’t say too much. Christie did tell Eyes On Windsor, “I am currently in the final stages of my second EP which I have recorded in Toronto with a new team of industry professionals. I can’t give too many details yet, but the music is coming soon, and it’s a bit different than my older stuff. All I can tell you that it is edgier, more mature, and has a definite theme throughout all the songs. I can’t WAIT for everyone to hear it!” 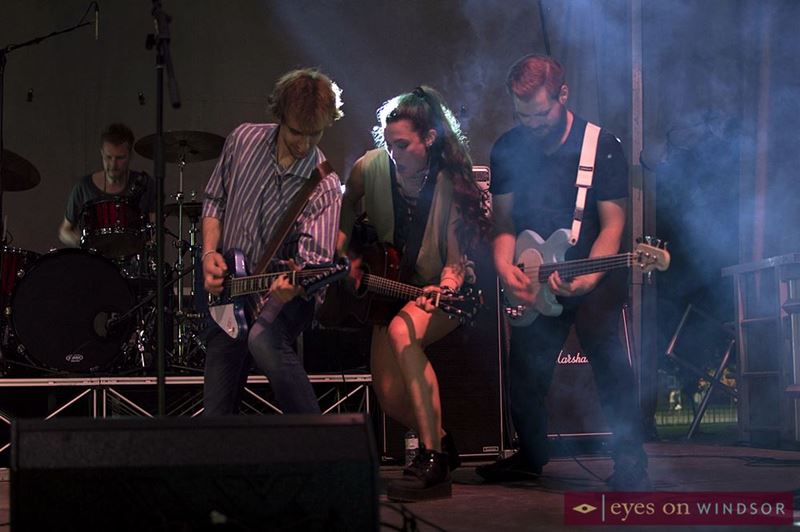 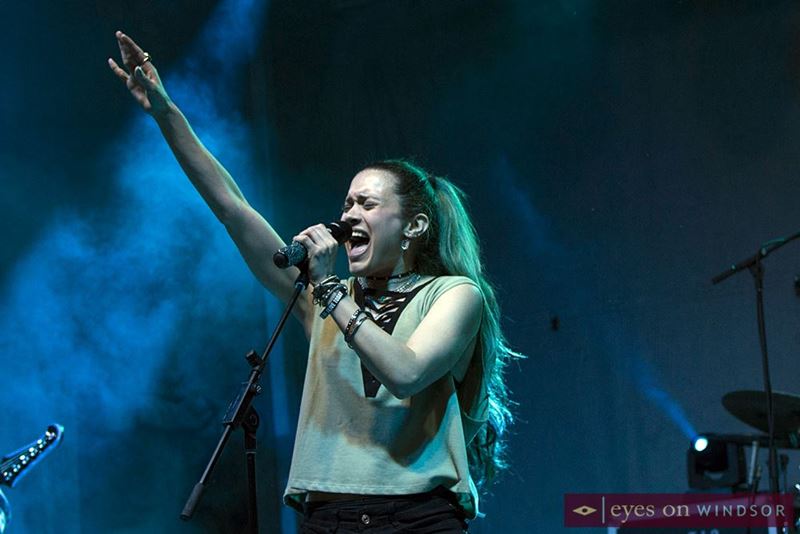 Christie Palazzolo holds her arm in the air while performing at the Lasalle Strawberry Festival on June 8, 2018. Photo by Eric Bonnici / Eyes On Windsor.

Christie informed us that the team she is currently working with (engineer, producer, photographer, etc) are based out of Toronto. She has just confirmed this weekend that she will be moving there within the next few months because it will be easier to work with the team and to access the opportunities available to artists in Toronto. “I am hoping to further my career as a songwriter, singer, performer, and musician. There’s many people there that I am eager to learn from. Moving to such a prestigious artsy city is the exact atmosphere I need to be in to grow and develop my own artistry,” says Christie.

To be the first to know about Christie Palazzolo’s newest music releases or to find out more about the artist, her upcoming shows, and puchasing her music follow her social media accounts and visit https://www.christiepmusic.com