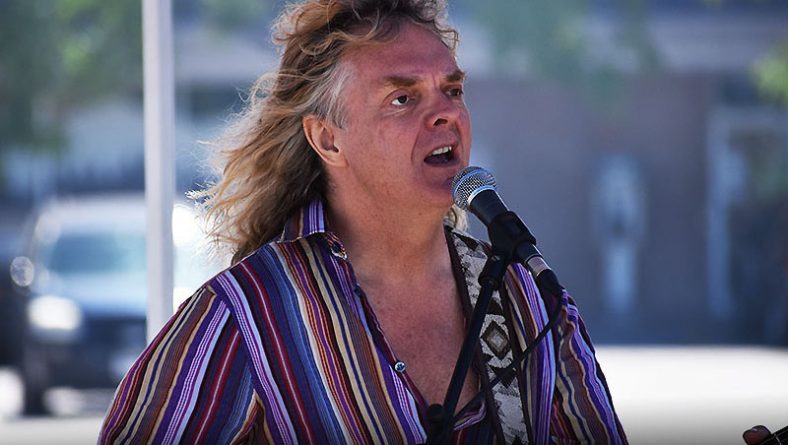 All his life, Carl Dixon has been a musician. He says, it is because he really couldn’t do anything else. The versatile singer, guitarist, drummer and pianist was in Windsor on Friday providing a musical background as part of hamburger chain Harvey’s summer coast to coast tour. The new Harvey’s RV is making stops in towns across the nation giving away their famous flame-grilled burgers, including its plant-based Canadian Lightlife offering, to support and thank frontline grocery store workers during the COVID-19 pandemic. As Harvey’s ‘Thanks’ burgers were given out at University Plaza in the city’s west end Dixon entertained the crowd. 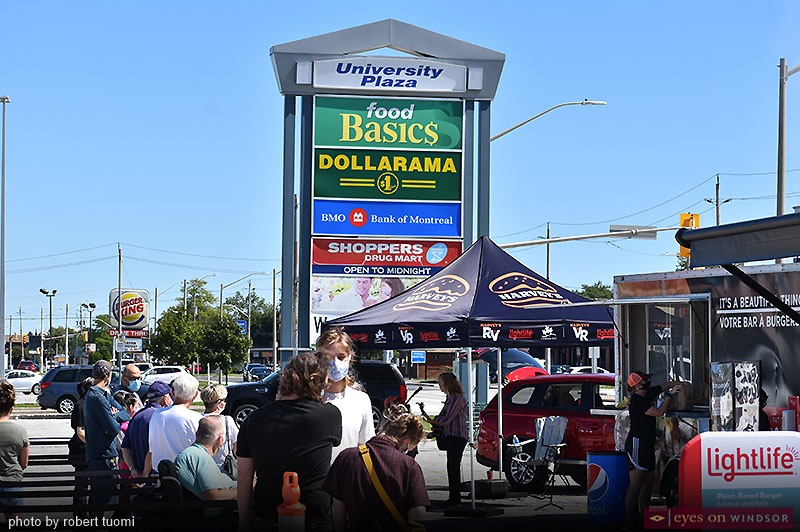 People waiting in line for free burgers from the Harvey’s RV while Carl Dixon performs at University Plaza in Windsor, Ontario, on Fri. Sept. 4, 2020. Photo by Robert Tuomi / Eyes On Windsor.

Dixon’s interest in music started at the young age of three, when the Beatles were all over the radio. Ironically, his first entry into owning music was the purchase of the Guess Who’s double sided hit single “Laughing” and “Undone.” April Wine was the first band he ever saw live, a performance at his high school, little knowing that his future would include being a member of both as well as Coney Hatch.

When he became the lead singer for the Guess Who, in 1997, to him, what was most surprising were fans thinking he was the legendary Burton Cummings, often complimenting him for not changing over the years. Dixon admits his objective was never to be Burton but to just enjoy the music. One of the reasons he was picked, aside from his prowess on a number of musical instruments, was his unique ability to hit the high notes. It was also the reason he became the fifth member of April Wine, touring with the popular Canadian band between 2001 and 2004. His role also drew on his exceptional capabilities with a variety of musical instruments.

These skills have been assets that have taken him around the world on tour and shored up a solid career as a solo vocalist with a number of record releases. There have also been Guess Who and April Wine albums that have benefited from his talents as well as a number from Coney Hatch. He remembers performing live with the band on MTV, the pioneering popular television music show. The group recently reformed and is working on a virtual show planned for Toronto’s famed, and renovated, El Mocambo nightclub.

If nothing, what he learned the most with his membership in the two famous Canadian bands is the value of their music catalogs and how much their songs mean to fans. April Wine, he tells Eyes on Windsor, has had so many hit songs that on most nights the band was unable to play them all.

His time with the Guess Who ended tragically in 2008 in Australia where an auto accident not only sidelined him but left him with a number of physical disabilities. Yet he has carried on. His journey is documented in his 2015 autobiography, Strange Way To Live, published by Dundurn Press. The book, and its honesty, has won rave reviews and led to a second career as a motivational speaker.

When offered to tour Quebec, Alberta and Ontario with the Harvey’s RV “Thanks Burgers” giveaway he jumped on it and the chance to play not only Guess Who and April Wine songs but those of many others including Neil Diamond.

It was also a welcome offer. These are, indeed, tough times for all musicians. In his case a whole carefully planned schedule of appearances this summer evaporated once COVID-19 came to town. Playing with Harvey’s is one way, “to keep food on the table.” 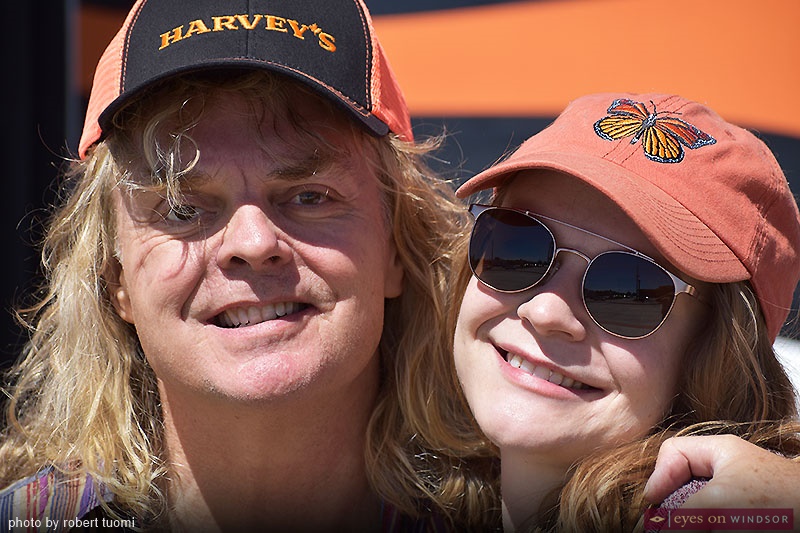 At Friday’s event, he occasionally shared the stage with his youngest daughter. Singer Lauren Dixon is also known for her acting, playing Stevie Lake No. 2 on the television series The Saddle Club. Her father penned “Just Because” for The Saddle Club’s Season 3 album Best Friends.

As to the future, Dixon sees more music, both with Coney Hatch and with his solo career.