In a press release, Bluesfest Windsor says, YUNITY is a new genre-rich concert initiative which will lead off with their Front Porch Party series. They are joining musicians from around the globe stepping up to stop the spread of COVID-19 and connect with fans through live-stream, stay at home concerts. The first concert featuring MacDonald is in support of health-care professionals risking their lives at ground zero, countless front-line service workers across the nation that keep our economy moving and the tragic events that devastated Portapique, Nova Scotia.

“Ironically, the current crissis we are living in has inspired a reimagining and new vision for a music festival that has gained a sizable fan base now heading into its seventh year,” emphasizes Rob Petroni, President of Bluesfest Windsor. “YunitY will create a new dimension of entertainment for the region’s award-winning festival, enabling us to broaden our diversity both in music and people. More importantly, it will enhance our partnership with the City of Windsor while supporting Mayor Dilkens’ and Council’s commitment in fostering a vibrant arts community.”

Bluesfest Windsor has also partnered with the Canadian Mental Health Association, Windsor=Essex County Branch to raise awareness and stress the importance of mental health education during these uncertain times.

“We know that there is no health without mental health,” stresses Kim Willis, CMHA-WECB, Director, Communications and Mental Health Promotion. “Our On the Front Lines campaign seeks to offer mental health education, awareness and support to people working in every sector. Events like the Front Porch Party will bring us together, virtually, of course, to shed light on mental health.

According to a recent Angus Reid poll: “Mental health has been one of the most consistent undercurrents of discussion around the impacts of this country’s COVID-19 pandemic. Half of Canadians (50%) report a worsening of their mental health, with one in ten (10% overall) saying it has worsened ‘ a lot'”. 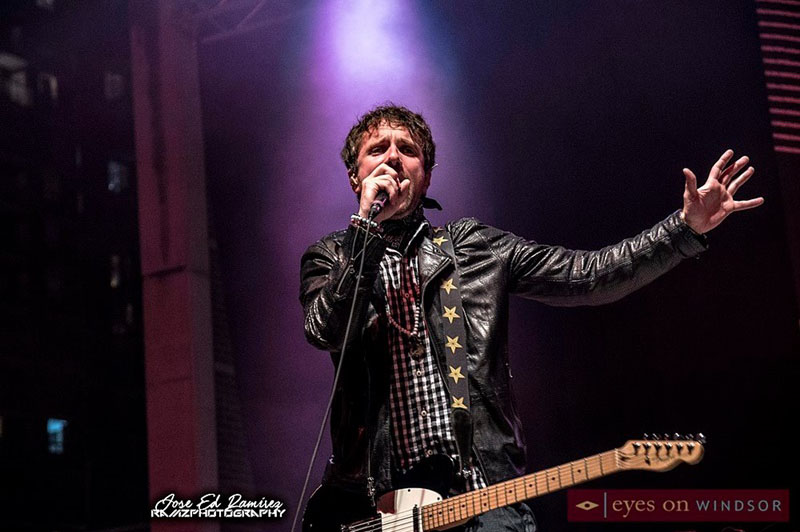 Bluesfest Windsor Artistic Director, Jeff Burrows, drummer with Canadian rock band The Tea Party, supports various charities locally including the Canadian Mental Health Association, which is one of the beneficiaries of his annual 24 Hour Drum Marathon Fundraiser. The event set for May 22 and 23 was cancelled but has been remounted as “The Half Drum Marathon” and will be streamed live online. Solo performers and duos only, to keep safe social distancing, will join Jeff at Good Time Charlies where they will perform. Donations in support of the event can be made online through Facebook. 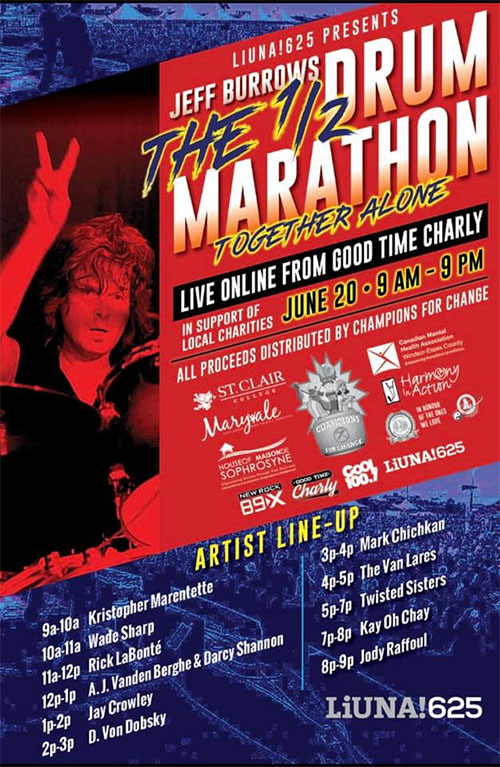 Jeff Burrows Half Drum Marathon set to be streamed online on May 23, 2020.

So far, Bluesfest Windsor is still scheduled to bring world class acts to Windsor, at Riverfront Festival Plaza on July 10, 11, 12, 17, 18, & 19, 2020, but will depend on regulations in regards to COVID-19. For more about the line up visit the Eyes On Windsor Bluesfest Windsor Event Listing.

The inaugural YUNITY Front Porch Party Concert starts at 8pm on May 2 and can be watched online at: 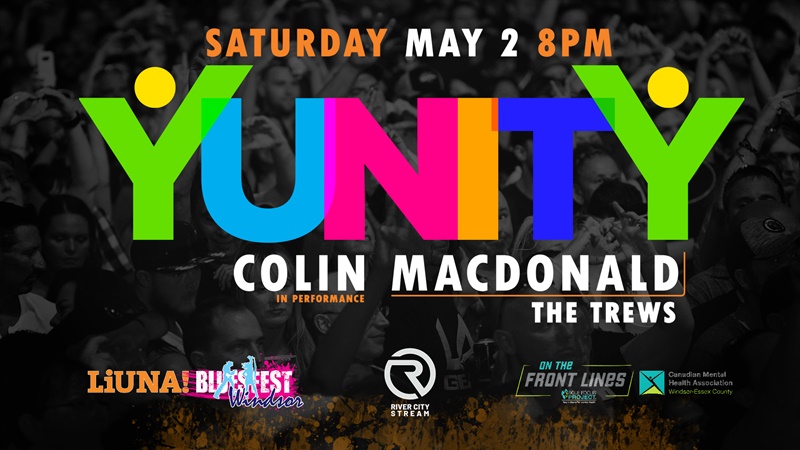