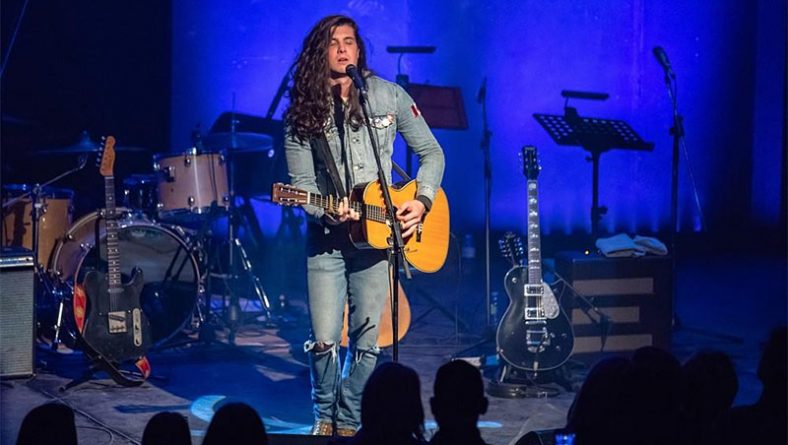 Following an extensive 1.2 million dollar renovation The Bank Theatre is set to reopen their doors for their “Grand Reveal” shows beginning Friday, August 30 with Russell deCarle and his band, Saturday, August 31 with an intimate performance by Sean McCann, and an up-close performance with Billy Raffoul on Sunday, September 1.

With funding support from the municipality of Leamington, the community and stakeholders, The Bank Theatre has added brand new retractable seating, refurbished lobby and bar, box office and accessible washrooms to bring the space to a state of the premiere venue for the arts. The green room downstairs is also being renovated for performers.

Co-chair of The Bank Theatre Building Committee Dennis Dick says it’s been a long haul but well worth the outcome. “The Bank Theatre is the culmination of a dream by many, as well as generous giving of both monetary and in-kind donations. Hard work and cooperation of many people in planning, time and money has contributed to this story of a community coming together to build this space.”

Opening the doors on Friday, August 30 is just the tip of the iceberg. Friday night kicks off with a bang!” said The Bank Theatre chair of programming John Moran. Russell deCarle is known as the lead singer and founding member of multi-platinum country-roots group Prairie Oyster. “I’m coming with my compadre the great Steve Briggs on guitar, the equally stellar Russ Boswell on bass and my old friend and leader of Stuart Mclean’s Vinyl Cafe Orchestra the incomparable John Sheard!”

Russell is currently touring in support of his third recording, a studio album of mostly original material titled Alone In This Crowd. The album offers a fluent collection of songs that mix southern soul and restrained balladry, with obvious touches of southern soul, jazz, blues, and old-school country. “Russell brought us one of our first sold-out shows at theatre and we’re thrilled he’s able to join us again.

For 20 years Séan McCann brought music to the world as a founding member of the renowned and multi-million selling group Great Big Sea; but now he’s on a new path. With the release of his 5th solo album, “Theres a Place”, he continues his journey as a singer, songwriter, and now a sought after speaker and mental health advocate with a simple message: You are not alone.

As Sean says “On Saturday, August 31st I’ll be back with my buddies at The Bank Theatre in lovely Leamington. The recovery of The Bank Theatre is a true Labour of Love and I am honoured to be invited back to share in their Grand Reveal.” Ursula Tiessen President of The Bank Theatre couldn’t be more pleased saying “Sean is truly a gem. His message is important, his music always fun and the night will be truly special.”

John Moran is thrilled with Sunday’s show saying “We wanted to bring in two special performers to cap the Grand Reveal weekend off. Who better than Billy Raffoul, who we’ve literally watched grow up on The Bank Theatre stage and now is having an amazing career, including a tour in Germany this year! Plus Wheatley native 14-year-old Kalle Nissila an emerging talent herself, will open the show.”

Billy Raffoul’s anthemic debut single “Driver” serves as a potent calling card for the 22-year-old singer, songwriter, and musician. His signature sound is a rough-hewn, low-timbered rock and roll that nods to the likes of Jeff Buckley, Neil Young, and Joe Cocker, and is powered by Raffoul’s gravelly, soulful voice and deeply felt lyrics.

Raffoul has been fairly certain of what he wanted to do with his life from a young age. He grew up in Leamington, Ontario — “the tomato capital of Canada,” as he puts it. His mother is an artist, writer, and teacher and his father Jody Raffoul is a solo artist and hometown hero who has opened for everyone from Joe Cocker to Bon Jovi. By 16, Billy had bought his first real guitar — a 1968 Gibson Les Paul Black Beauty.

Raffoul now splits his time between Nashville and Los Angeles where, in between playing shows, he has been collaborating with other songwriters and slowly but surely assembling his debut album. “Since it’s my first record it feels like I’ve been writing it my whole life,” he jokes.

As he gears up to finish his debut album, Raffoul is also eager to tour and see the world. “But I think that even in this ever-changing music business there will always be a thirst for live performance and that’s what I want to do. That’s always been the goal. Connect with people, one room at a time.”

John Moran says “It truly is a magical weekend with something for everyone. We also welcome back our volunteers and stakeholders by invitation with a special performance on Wednesday and Thursday August 28 and 29 respectively. Plus we will have an open house on Saturday, August 31 from 1-3pm. It’s a big week and we’re all thrilled to be back in the theatre!

The Bank Theatre is located at 10 Erie St. S., in Leamington. Doors open at 6:30pm and the show begins at 7:30pm for all 3 shows! Tickets are $35 plus HST and available online at www.banktheatre.com by email banktheatre@gmail.com calling their hotline 519-326-8805 or limited hours at the box office.

Russel deCarle In Concert at The Bank Theatre Grand Reveal 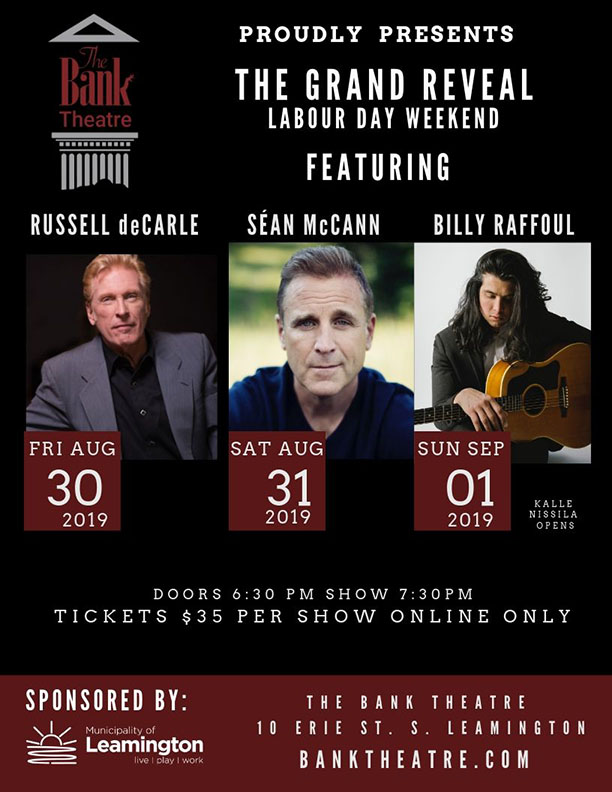