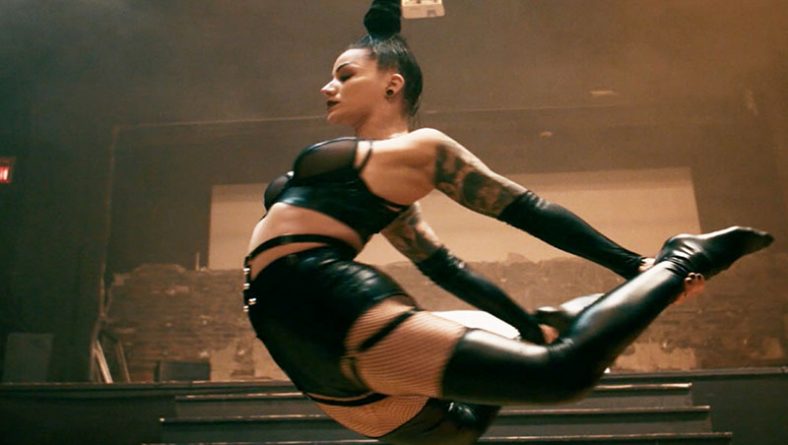 (Aerialist Deanna (Deanna Papineau) performing hair suspension at The Redwood Theatre in Toronto, ON. Photo above by Mike Klassen.)

Mysterious, elegant, edgy and mesmerizing, Windsor native Aerialist Deanna Papineau has not only been dazzling audiences with her performances, including rarely seen hair suspension acrobatics, but she’s been teaching, dabbling in directing, and is highly sought after with offers coming in from around the world. Deanna took some time to talk with Eyes On Windsor about her exciting career. 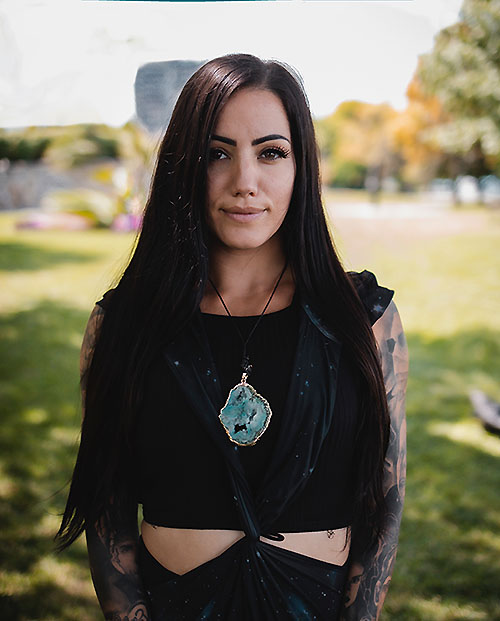 Self discipline is clearly in Deanna’s nature and it’s paying off. It was instilled upon her as a child, when at four years old she took up figure skating, competing in North America by the age of five. “ I competed almost every single weekend,” explained Deanna. “I figure skated before school and after school, so I was pretty disciplined as a child.” She was involved with figure skating until the start of high school. “After high school I studied nutrition in Toronto. Then I pursued a four year nursing degree at the University of Windsor graduating from the RN program. After that I got my Yoga certificate.” 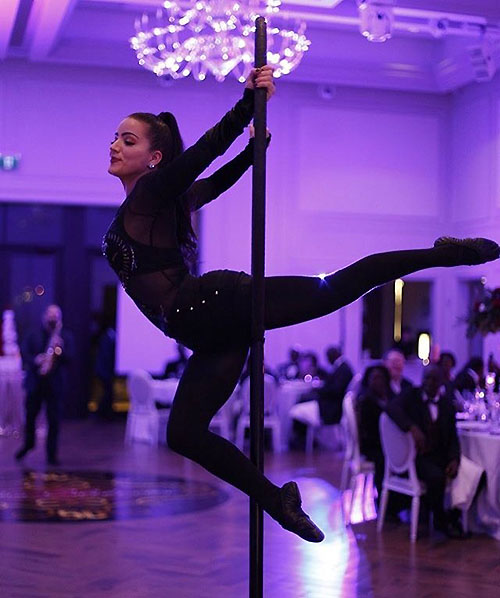 Aerialist Deanna (Deanna Papineau) performing on the lollipop lyra pole at The Arlington Estate in Toronto, ON. Photo by Jonathan Abreu.

Deanna taught at the Yoga Loft, owned by her uncle Romano Formicuccia, where she stumbled upon circus performance. Yoga Loft held a workshop featuring circus artists. “I thought it was so cool and fell in love with it,” Deanna told us. “So I started travelling to Toronto to learn it because no one was teaching it around here.” When Windsor Circus School opened their doors Deanna began teaching there. “I was already involved with circus, so I started teaching for Windsor Circus School right away.”

“I used to teach a lot of yoga until aerial performance started blowing up for me,” Deanna explained. She still teaches yoga to a few clients but has turned her focus to aerial performing, coaching and directing. “A lot of my energy is in aerial performance, I also coach it now and I’m dabbling more in the directing side.” 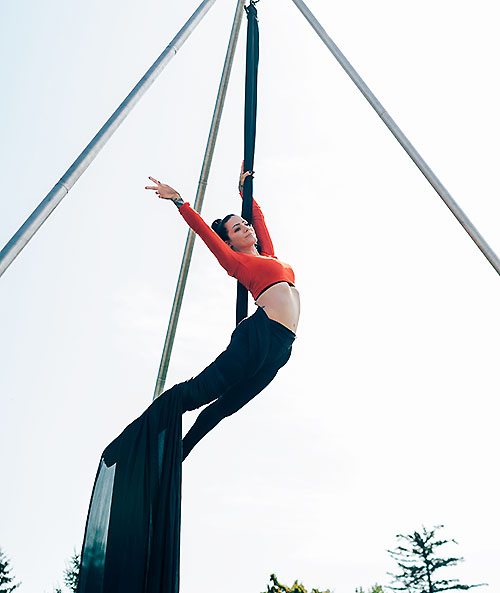 Aerialist Deanna (Deanna Papineau) performing on the aerial silks during the Transition 2 Betterness Yoga 4 Hope fundraiser in Windsor, ON. Photo by Emilie Bowman.

Deanna has several accounts with large event organizers across Ontario where she is responsible for hiring, choreographing and directing other aerialists to provide entertainment. “For instance, the London Food and Wine Show hired me to choreograph and direct the entire ground entertainment people saw when they were first walking in.”

Currently Deanna is collaborating with Border City Dance Company and Rockstar Music Hall in the production of an exciting original production called Steampunk Circus. While most of her other directing gigs were a part of a larger event, this is, as Deanna says, “My first show where tickets are being sold and people are coming for my show. I’m choreographing and directing all the aerial stuff (that’s about half the show). The rest will be a mix of live music and dance that Border City Dance and Rockstar is putting together.” The theatrical show will take place as part of Rockstar’s drive-in style entertainment series on the outdoor stage in the parking lot of Rockstar Music Hall. The audience will pull up, park and enjoy watching the show from the safety of their vehicles. “I’m so glad that Rockstar was doing the drive-in shows, it’s cool that they’re making things happen during this time of COVID. I’m really grateful to be involved and have a directing role in the Steampunk Circus show.” Steampunk Circus takes place on July 16, 17 and 18. 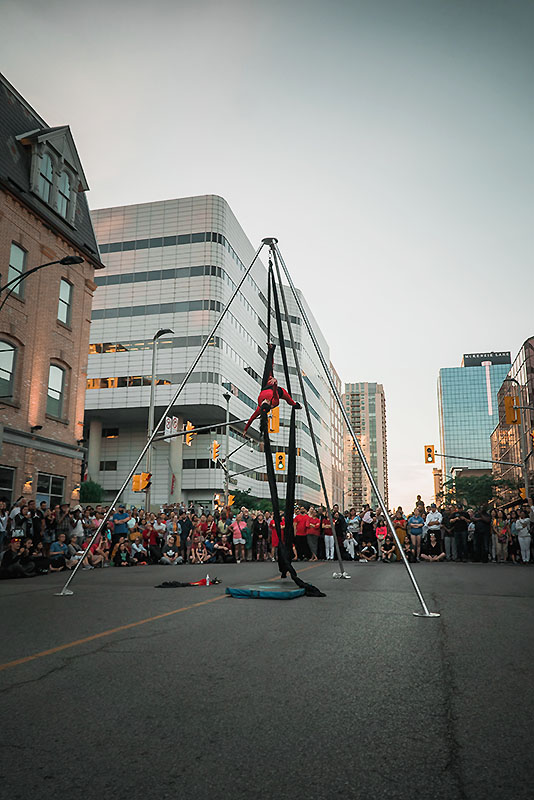 Aerialist Deanna (Deanna Papineau) performing on the aerial silks on the streets of downtown London, ON. Photo by Josh Ford.

In addition to directing and choreography Deanna is a coach and trainer. For example she says, “I was a trainer with the Toronto School of Circus Arts for Norwegian Creative Studio.” Norwegian Creative Studios produces the highest caliber of quality entertainment at sea for Norwegian Cruise Line. “That was to train artists on aerial disciplines to get them ready to entertain on cruise lines.” Unfortunately, her training gig was cut short when COVID hit.

While the pandemic slowed down the momentum of her career she has still continued to move forward. She’s been involved with some virtual online performances and music video shoots.

Locally, Deanna just finished performing in a music video shoot with MELØ, a new solo project by a well known Windsor musician, Carmen Rivolta .The video features the original track Mysteria and is due to be released in the near future, possibly September, so watch for that. MELØ says, “Deanna was fantastic to work with and hopefully we have a few more videos in the works.” 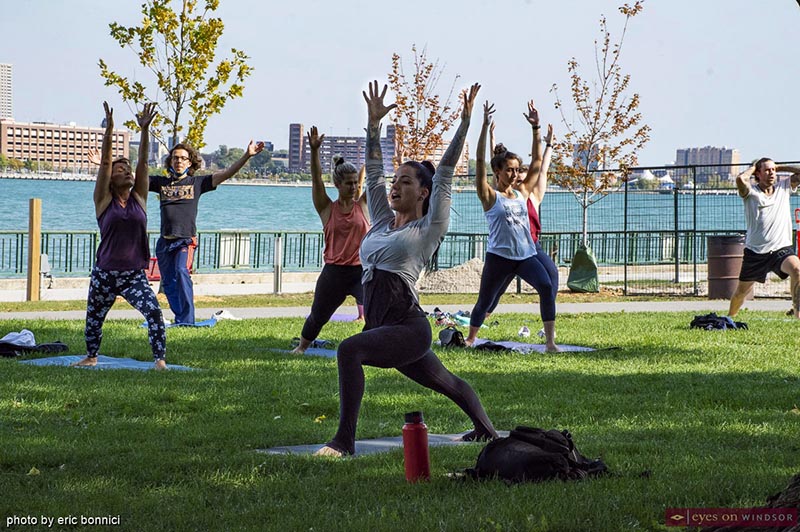 Aerialist Deanna Papineau teaching an outdoor yoga class during Transition to Betterness’ Yoga 4 Hope in the park at Dieppe Gardens in Windsor, Ontario on Sunday, 22 August 2020. Photo by Eric Bonnici / Eyes On Windsor.

Deanna is also involved with supporting her hometown community. On Aug. 22 she will donate her time to local charity group Transition 2 Betterness by teaching an outdoor yoga class during their annual Yoga 4 Hope In The Parks fundraiser. Proceeds will benefit ongoing programs intended to help people who experience hardship as a result of cancer and chronic disease diagnosis and treatment.

An exciting new production in Toronto that Deanna is performing a lead role in has also been delayed by the pandemic but it will finally open on Oct. 5 at Le Chateau de Jardin. It’s a cabaret dinner show called KAMA featuring dance, aerialists, cirque and live music. KAMA is a Sheldon Universe Production as part of CABARET by Après Noir. The show includes choreography by Hollywood Jade, a resident of Canada’s Drag Race on Netflix as well as Arsenio Andrade an Afro Cuban Contemporary faculty member of the Ryerson University Dance Program. 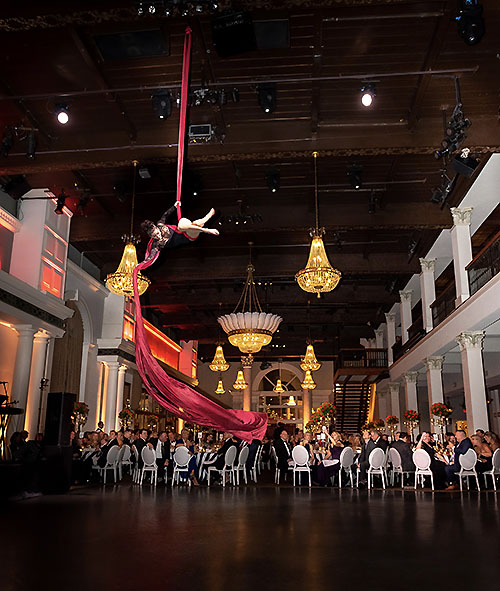 Aerialist Deanna (Deanna Papineau) performing on the aerial silks at Liberty Grand in Toronto, ON. Photo by Anna Sudyk.

Certainly if the COVID pandemic did not happen, Deanna would have more of an international presence by now. She says, “my goal was to go more international for 2020 but that was before COVID hit. I have a South American festival in 2022 in the jungle that is in the talks right now. I just have to give them the word that I’m going and that’s what I plan on doing.” 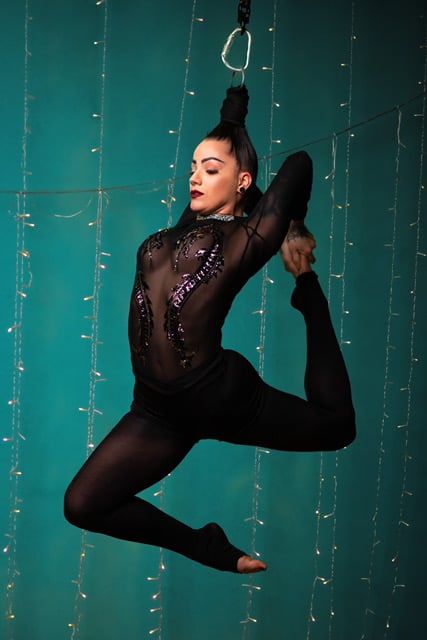 Luckily, just before COVID, Deanna discovered hair suspension and she searched the world for someone willing to help her learn and add this secretive aerial discipline to her skillset. Deanna said, “when I first saw it I thought how is she hanging by her hair? This is impossible. I was so inspired, it was so beautiful but also had a real wow factor to the art. So I wanted to build my career and have something like that. The unfortunate thing with hair suspension is no one really teaches it. It’s something that is handed down from family generation to family generation, you had to be born into a family of hair suspension to learn it. It’s an old traditional circus discipline. I asked so many people around the world if they would teach me, I was willing to fly anywhere to learn it. I found an artist in Europe who was willing to teach me. I flew to Europe and learned hair suspension in February of 2020 just before the pandemic hit, so I was lucky. The funny thing is when I followed these hair suspension artists they would tell their story of how it would take them six months before they were actually suspending and hanging by their hair. It takes a long time to work up to that. I suspended the second day I was learning. I really shocked myself because I thought it might take me six months before I’m actually hanging but at least I’ll learn the technique of how to rig my hair and suspend safely and properly. I really progressed with hair suspension quickly. Now I perform it and hope to do it a lot more.”

“I absolutely love hair suspension, it’s my newest and most unique aerial discipline. Not many people in the world do it, in Canada there are only a few, it’s very rare. No one really shares how to do it, it’s one of those kept secrets.” 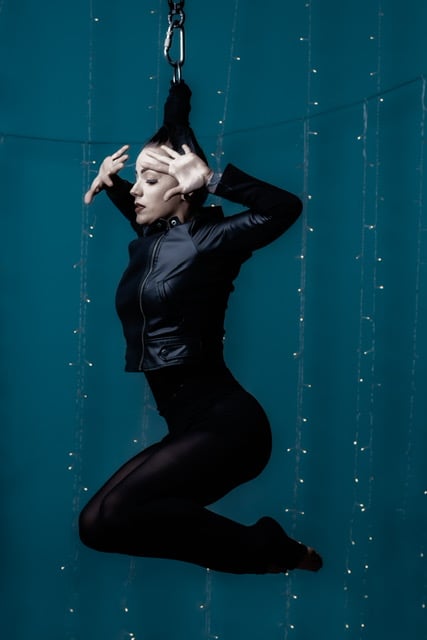 When we asked Deanna if hair suspension is painful she replied, “I wouldn’t say hair suspension hurts. I would say it’s more of a sensation, I can feel tugging but when I’m in the moment I don’t really feel it. I get lost in the music and my suspension and it kind of feels euphoric that I’m floating and free and that I’m not holding onto anything. With all my other apparatuses when I’m high in the air I’m hanging onto something. With hair suspension all my limbs are completely free. I really enjoy hair suspension because I’m free to express with all of my limbs. It’s more floating, dancing, swinging, spinning and all of my arms and legs are free. It creates cool shows.” 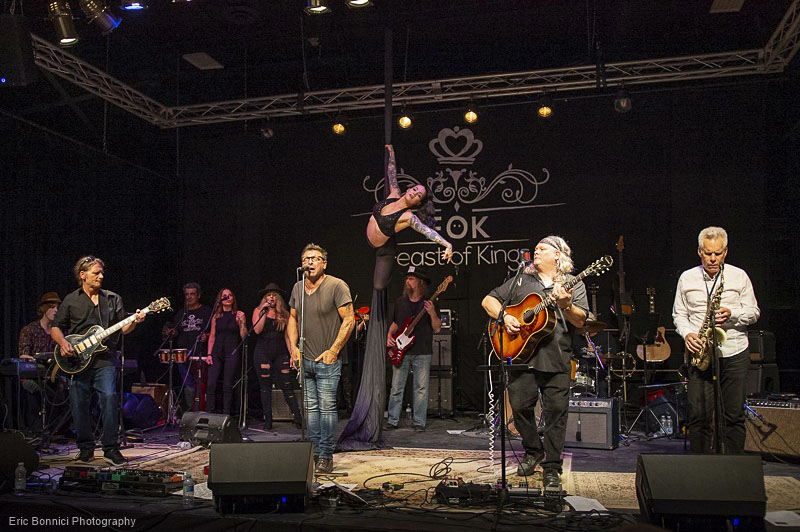 Aerialist Deanna (Deanna Papineau) performing on the silks during the Feast of Kings Conflicted album release concert at The Bank Theatre in Leamington, ON, Sept. 27, 2019. Photo by Eric Bonnici / Eyes On Windsor.

Aerialist Deanna is available to perform in a wide range of events including galas, weddings, festivals, concerts, and music videos. That’s in addition to her availability to direct and choreograph for event and entertainment productions. Anyone interested in working with Deanna should get in touch with her sooner than later because as pandemic restrictions are lifted we predict this is one world-class aerialist that will be booked solid fast. 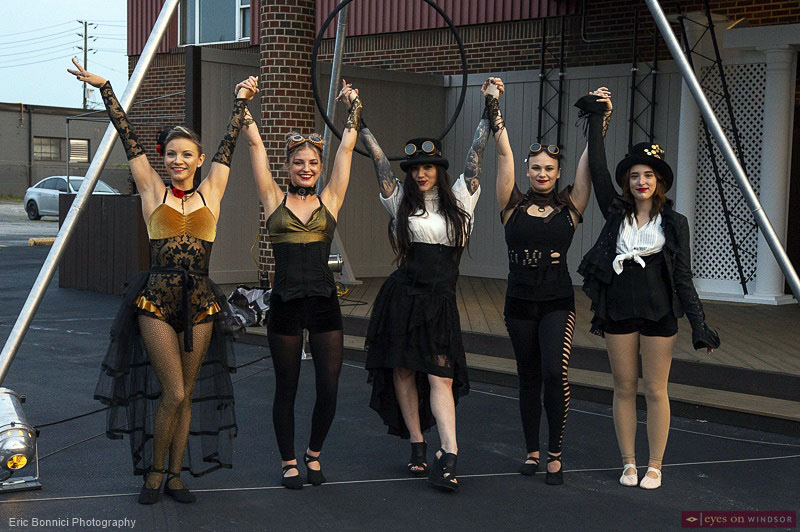