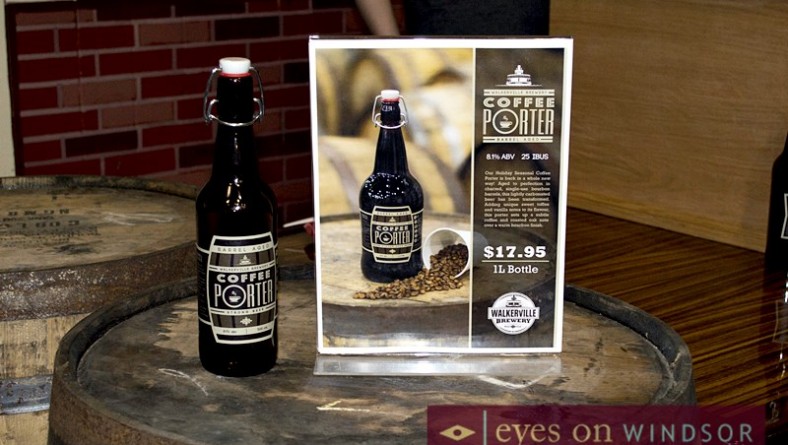 Walkerville Brewery released the first of their Barrel-Aged Beer Series, made with limited edition post prohibition Coffee Porter, at a launch party on Friday, May 15, 2015. The evening featured samples of Coffee Porter aged in bourbon barrels, the Derek Boyle Band live, and delicious eats served by Walkerville Tavern as part of the weekly Bites n’ Beers event. 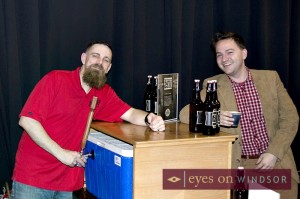 The Barrel-Aged Series is infusing Walkerville Brewery’s seasonal beers with bourbon and wood flavours. American oak barrels used in the production of Jim Beam are used to create these unique craft beers. The beer aged in these barrels absorb qualities from the bourbon and flavours from deep within the wood. During the first few months in the barrel, the beer absorbs the flavour characteristics of the bourbon as well as the oak. As time goes on, beer will soak deep into the barrel and pull out hidden floral, vanilla and caramel notes from the wood. The addition of these new flavours create a beer with a new complex flavour profile. 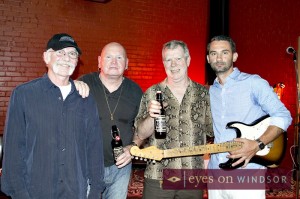 Walkerville Brewery describes the Barrel-Aged Coffee Porter as, “Aged to perfection in charred, single-use bourbon barrels, this lightly carbonated beer has been transformed. Adding unique sweet toffee and vanilla notes to its flavour, this porter sets up a subtle coffee and roasted oak note over a warm bourbon finish.”

“I think it’s well balanced and has a very nice flavour of the bourbon which comes from the barrels,” says local reporter and musician Jon Liedtke. “At the same time it has a very creamy mocha finish, it’s well balanced, but it’s still got a kick in the end. I’d say it’s the kind of beer that you could be worried about because it tastes nice and will probably get you were you want to be depending.” 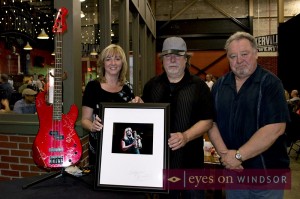 Since only two barrels were produced this unique beer is extremely limited. Asked how long the beer is expected to last, Walkerville Brewery’s marketing and events manager Natalie Lahoud said, “it will probably only last until the end of the weekend.”

While the beer may only be around for a short while customers at the launch party enjoyed sipping the barrel-aged coffee porter and live blues music performed by The Derek Boyle Band. The Canada South Blues Society arranged for the band to play at this event. The Society’s board members were on hand promoting their upcoming summer show featuring 24th Street Wailers and Juno award winner Steve Stongman taking place June 19, 2015. In addition, funds were being raised for the CSBS through a 50/50 draw, raffle for an autographed guitar, and a framed autographed photo of the legendary Edgar Winters. “The guitar was donated by Gary Renaud of Cadillac Hooker and signed by all the guest players at the Stu Heydon Induction and will be raffled at our June 19 show,” says Michael McCann, CSBS President. 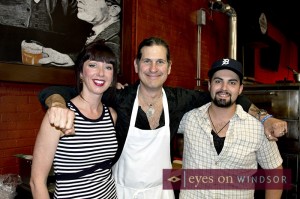 Guest also enjoyed the delicious Bites N’ Beer menu featuring shrimp rolls, mini grilled cheese, mac & cheese, and summer chicken cacciatore served by The Walkerville Tavern. Local musician Tara Watts was helping serve the food for a while before heading out for her performance at Rino’s Kitchen that eventing. Bites N’ Beers takes place every Friday at the brewery.

When the barrel-aged Coffee Porter runs out craft beer drinkers can look forward to the next two beers in the barrel series. “The Scotch Ale is currently aging and the Milk Stout will follow,” says Carlo Mac who works at the Brewery.

For more information about Walkerville Brewery or their Barrel-Aged Beer Series visit WalkervilleBrewery.com