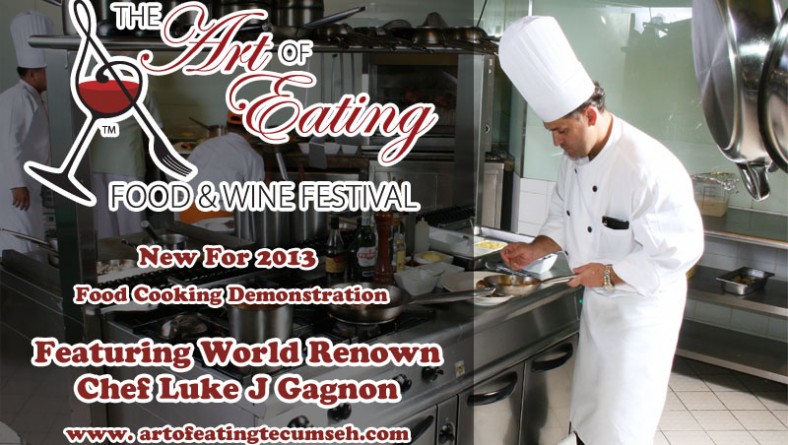 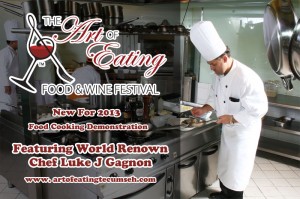 Get ready to experience a live cooking demonstration by world renown Chef Luke Gagnon at the Tecumseh Art of Eating Food & Wine Festival. A Cooking demonstration is new to the festival this year and the committee is bringing one of the world’s best culinary artisans on board to entertain attendees.

You see, while Gagnon attended high school in Windsor he worked as a kitchen helper at Beach Grove Golf & Country Club. Eventually his culinary passion led to a storied career that took him around the world to master cooking skills at the finest hotels and restaurants in Toronto, China, Michigan, Malaysia, Ontario, and the Philippines.

While in Toronto, Chef Luke Gagnon was heavily involved in food and ice carving competitions in the region and twice competing at The World Culinary Olympics in Frankfurt Germany and across Asia. In November 1989 Gagnon represented Toronto in the first World Ice Carving Competition in Vancouver British Columbia. During the 1995 Hong Kong Hotel Association’s Ice Carving Competition Chef Gagnon took second place.

In addition to ice sculpting competitions, Chef Gagnon boasts a long list of culinary achievements. Examples include, winning both individual and team gold medals at the 1988 I.K.A. World Culinary Olympics (the largest and most prestigious culinary competition in the world). Then in 1992 Gagnon was hired by the province of Ontario to coach the first Culinary Aboriginal team to compete and represent Canada in the World Culinary Olympics. The team won 7 gold medals. In 1991 Gagnon was brought on as the guest chef to prepare a Gala Dinner in Washington D.C. at the Canadian Embassy Consulate. In 1993 Luke was selected to judge for the International Taste of Canada Culinary Competition, 23 teams from 14 countries participated. In 1996 Luke was the team captain for The Marco Polo Hotels Culinary Team, in Food Asia Singapore, winning 9 medals. These are just some of Gagnon’s achievements with a total of 18 gold medals won to date at culinary competitions.

Chef Luke Gagnon’s next stop to showcase his culinary artisian skills will be at the first ever cooking demonstration at the Tecumseh Art of Eating Food & Wine Festival 2013. Through his cooking demonstration, Chef Gagnon will show you three recipes highlighting how to create art with food, wine, and beer.

Tickets are selling fast and can be purchased in advance for the Tecumseh Art of Eating Food & Wine Festival for $12 or $15 at the gates.