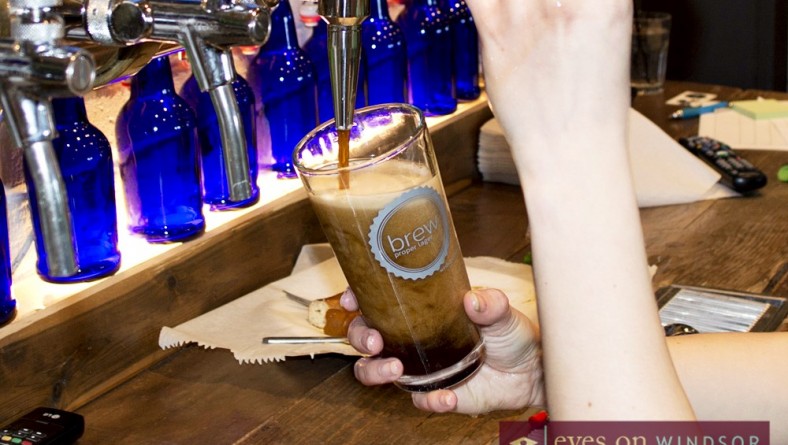 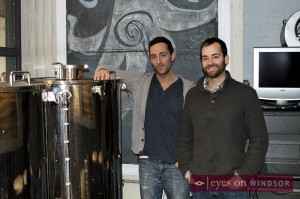 Spokesperson Jordan Goure said, “the style we were going after was a dry Irish stout that wasn’t super sweet. The chocolaty flavour comes from organic coco, as opposed to chocolate syrups, we don’t like to use fake stuff that’s not good for you. Craft beer should be somewhat healthy, preservative free.”

St. Patrick’s Day may have seemed like the perfect time for Brew to launch their Irish style Black and Brew Stout but it’s not the only reason. About 100 years ago the building was originally a chocolate factory, “that’s why we did the Black and Brew Chocolate Stout as a tribute to the original use of the building,” explained Goure.

The building was traditionally used by the wholesale food industry, once as a produce factory and then as a wholesale seafood factory. The new operators might actually receive a heritage award for their renovation of it into Brew Microbrewery. “We’re pretty excited about that and we want to preserve the heritage, so we’re keeping the Black and Brew Chocolate Stout year round, and we’re considering incorporating logos from the original chocolate factory into the beer’s label,” said Goure.

On the St. Patrick’s Day launch of the Black and Brew Stout a fiddler and accordion player opened the day with live entertainment, a live radio broadcast followed in the afternoon featuring Mix 96.7 FM, and an Irish specialty food menu was served all day. 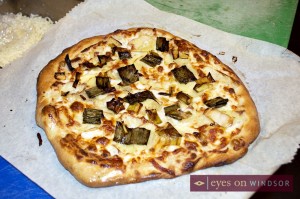 Chef Stu Martin is the driving force behind the kitchen at Brew with a lot of fine dining experience behind him including 20 years at the former Chatham Street Grill. “We’ve worked with Stu for the last 6 years and brought him in to create a very small menu, we don’t want to compete with the restaurants we supply our beer too, but want the food to be unique,” said Goure. 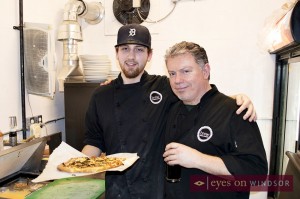 Brew’s regular menu offers four different Brewzzas (pizzas) like the Pappa G featuring house tomato sauce, mushrooms, malted bacon, and genoa salami. The bacon on this pizza is malted like all of Brew’s meats on the menu. In addition, all Brewzzas are made with “a barley based dough that we get fresh from right here in Windsor at Sunrise Bakery,” explained Goure, “we send spent grains so they can make our barley based pizza dough for us.” The citrus flavouring hop used in Brew Proper Lager provides “some citrusy zest in our salsa,” said Goure.

The unique beer ingredient food menu is a nice touch but the highlight is the fantastic craft beer Brew is producing in Windsor. 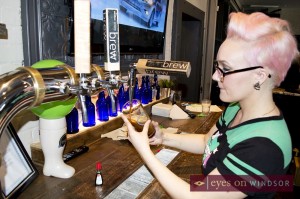 Currently, three beers are available on tap including Brew Proper Lager and Black and Brew Stout. The brewery plans to serve these year round. The third tap, Brew Saison, can be found flowing from the brewery’s seasonal tap. Brew Saison is an amazing fruity farmhouse ale that incorporates wild yeast. “You’ll taste flavours such as banana and hints of raspberry aromas, you get a lot of flavours you wouldn’t normally get out of beer,” said Goure.

Brew also offers craft beer cocktails which have been a huge selling point. Jordan’s brother Joshua Goure is the mixologist who created most of the cocktails. “Some are traditionals such as the shandy and red eye, some are things we’ve seen on vacation, like the Michelada, but they’re all beer based cocktails, and there is some unique stuff Joshua came up with like our Bananenweizen which is a banana puree we make here in house,” explains Jordan, “people are amazed, they can’t believe you can make a cocktail with just beer and have it taste this good.”

In the near future customers can enjoy Brew’s craft beers, food, and beer cocktails on an outdoor patio beer garden. The Brewery hopes to have their beer garden open by the summer, “We want to use astroturf, picnic tables, and pergola lighting, so as soon as that’s approved by the city we’re going to start construction,” said Goure. The patio should provide about 24 seats.

As the nice weather approaches Brew will participate in several local festivals and events in the area. They plan to participate in all three local beer festivals (Lasalle Craft Beer Festival, Windsor Craft Beer Festival, and The McGregor Mug Run). “We’re supporting the Windsor Eats Bikes and Beers Cycling Tours, we’re already on the first two scheduled nights of that,” says Goure. Brew will be at the upcoming Leamington Home and Garden Show, “we’re going to be the only brewery, so we’re pretty excited, it will be the first time we get our product out in Leamington,” he said. In May Brew will participate in the 29th Annual Battle of the Hors D’oeuvres presented by Caesars Windsor in support of Big Brothers Big Sisters of Windsor Essex. The brewery also plans to participate in one or two events within an hour or so outside of the Windsor area to ensure people recognize their brand once it is introduced in those areas in the future.

Brew is also available at 7 locations around Windsor Essex with the latest being The Hideout Bar and Grill in Lasalle, and Merlis’ Coffeehouse and Eatery in Kingsville, where Brew’s famous blue bottles can be found. “We don’t want to sign on more than three more accounts over the course of the summer because we’ve been relatively busy and can’t keep the blue bottles stocked in our tap room, everyone loves the blue bottles that we sell, and we want to make sure we have enough beer for festival season,” explains Goure.

Jordan Goure is the main brewer and Joshua Goure assists him. The brothers learned hands on how to brew craft beer by hiring a qualified consultant to train them. The consultant came on board for six months and visits monthly to do tastings and answer questions. “I know there are certificate courses out there, Niagra Falls has one and there’s one right over the border in Michigan, as opposed to going that way I paid a consultant with a biology degree and credentials in brewing to train me on site, learning to use the equipment is a huge part of the battle,” said Goure, “understanding everything behind the brewing in this hands on approach was the best way to learn for me.”

The Goures are currently training to become certified cicerones. They have passed the first exam and are certified beer servers. “Right now we’re focusing on tastings once or twice a week to prepare for this part of the cicerone exam which we plan to take in about twelve months,” explains Goure.

For more information about the Brewery visit BrewWindsor.com